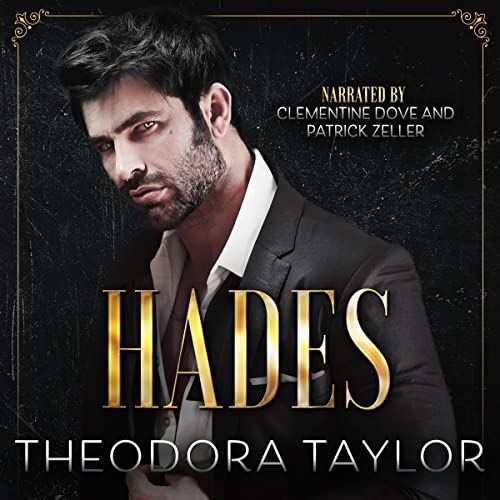 Hades: Stephanie and the Ruthless Mogul

Is my husband a dream come true?

Or the nightmare I was trying to escape before I lost my memory?

I didn’t know true desire until the first time I laid eyes on him. Tall, dark, beautiful as a god—completely forbidden. He was the penniless son of the help born in the Lousiana bayou, and I was a pretty southern princess, cultivated like a hothouse flower to become the trophy on some well-pedigreed man’s arm.

My mother slapped my face when she saw us together and warned me he would ruin me. A few weeks later, my father made me sign a contract vowing I wouldn’t have relations with anyone until I married.

So, I tried to forget him. Until one day I woke up to find out I actually had.

There’s a near-decade hole in my memory. My disapproving parents have passed away. And the biggest surprise of all: that boy my mother warned would ruin me?

He’s still beautiful as a god, and he’s now rich as one, too. He’s made himself over from a poor Cajun boy living on the bayou into a ruthless mogul with enough money to give me anything my heart desires. A huge house on a lake, the perfect job, and endless pleasure.

He’s a total dream husband. Until one day I receive a note from someone I trust, telling me three unsettling things.

Could it be? Is my dream-come-true actually the nightmare I was trying to escape?

What would you do if you were me? Live with the perfect illusion? Or do whatever it takes to uncover the truth?

Good but could have been better

I enjoyed the story over all and the performance was outstanding as always. However, though this whole Ruthless repers series they have billing up Hades and Persephone story. I wish we could have just focused on them giving more details of there time together and have given Tess and Benjamin there own book or short story. I feel like Hades and Persephone story got the short end of the stick a little and I found my self wanting to rush through Tess and Benjamin to get back to them. which is not fair because Tess and Benjamin's story was also interesting it just didn't need to be smushed into another story.

Absolutely awesome book. Galen”Hades” and Stephanie “
Persephone”. are so perfect together. This second book of this series was absolutely amazing. I love the intermingle stories in these books. It makes them much funner to read when you have a lot going on. I have read and listened to several ruthless reaper books and all have been more than worth my time. this is a must read.

This book was excellent. I wish that she had given into their stories more, Hades and Persephone, and for Benjamin and Tess, I want to she went a little bit deeper into their account but overall, it was an okay story, and I can't wait until it comes out with Christmas and the other The Scrooge

I’m glad I got to see the progress for both couples. Looking forward to the continuing development in other characters.

Find out for yourself

I read the reviews regarding the book and audio version and was almost not going to read either book. I am so glad I did listen to both. They were great and I didn’t get lost nor was I upset to see Tess and Benjamin’s story in there. It needed to be told I’m order to understand fully how they fit in the story. Personally, I think those two had enough to carry an entire book as they were but definitely fit into another one. It was sweet and kept my attention. The narrators also did an amazing job.

This was a decent book to listen to however it was kind of all over the place. I have read all of the other books in this series so I kept feeling like I missed something in the previous books. I’m glad everything came to the surface or I would’ve continued to be confused. I even found myself scanning through the Waylon book to make sure I didn’t miss anything crucial. I also didn’t understand why they had an epilogue of Waylon at the end of the book if this is the last book of the series. I’m rating this 3 stars because I really didn’t care too much for Tess and her story with Benjamin. She was so childish to me. 16 years of anger over him embarrassing her was kind of over kill. Not to mention she never even told him about the situation she was in. She could have resolved the issue (or atleast tried) way before Stephanie literally brought the resolution to her door step had she not been childish and communicated what happened. I just could not like her even in the slightest. I have read so many of this authors books and I love her work but this book was kind of hard to follow along with.

I really look forward to reading everything you write, this was no exception. Hades was a bit...much, I mean he was very harsh. But I love his growth. Also I love Clementine, but she didn't give the voice over for Hades justice. I would have loved if Patrick read all the male parts and Clementine read all the female parts interchangeably not just the character for each.