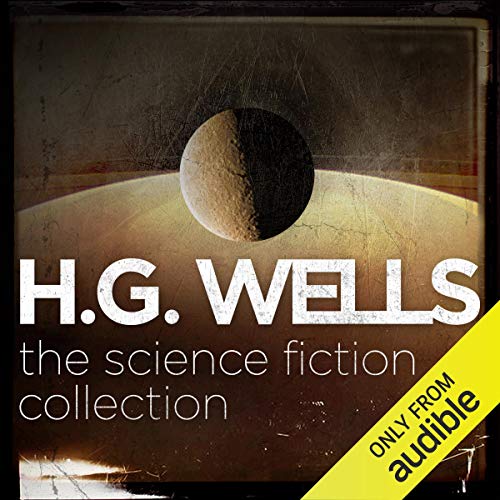 The War of the Worlds narrated by David Tennant

When Earth is invaded by Martians in great mechanical tripods, terror ensues. They are equipped with heat rays and poisonous black gas, intent on wiping out the human race. During the destruction, one man’s story details the monstrous invasion and his struggle to find his wife in the devastation.

The First Men in the Moon narrated by Alexander Vlahos

A chance meeting between penniless businessman Mr Bedford and absentminded scientist Dr Cavor leads the two on a fantastical journey to the moon. However, they are unprepared for what they find: freezing nights, boiling days and sinister alien life. Will they be trapped forever?

Transported to the year AD 802,701, the Time Traveller encounters the peaceful Eloi, a beautiful elfin race of childlike adults afraid of the dark, and with good reason. Beneath the earth’s surface live the Morlocks, apish troglodytes who torment the Eloi. When the time machine is stolen, the Time Traveller must enter Morlock territory if he ever hopes to return home.

When a strange man takes shelter at an inn, his skin covered from head to toe in bandages, he causes distrust. Griffin, a scientist, reveals that he has successfully managed to turn himself invisible, but alas without a way of undoing it. Desperate for a cure, his ailment drives him to many sinister actions, including murder.

The Island of Dr Moreau narrated by Jason Isaacs

Edward Prendick, the single survivor of a shipwreck, is rescued by Montgomery in a vessel carrying a menagerie of savage animals. Taken to an uncharted island, he meets Dr Moreau - a brilliant scientist whose notorious experiments have caused him to abandon the civilised world. It soon becomes clear he has been developing these experiments - with truly horrific results.

Known as ‘The Father of Science Fiction’, Herbert George Wells’ writing career spanned over 60 years. He was a writer of novels, short stories, nonfiction books and articles. As a young man, Wells won a scholarship to the Normal School of Science in London, sparking his infamous vocation as a science fiction writer.

Great voice acting: each story was well paced and well acted, so much so that one felt fully immersed in the story!

Wells's mostly first-person, somewhat detached narration might be off-putting to some, so having a professional narrator can help break up any monotony.

I'd not read War of the Worlds since high school, and had never read the others, that I can recall (although I'd seen the film adaptations). Of the lot, David Tennant gave the most animated and varied reading. It took a few minutes to get used to the tone he chose, which seemed targeted toward a younger audience, where, for some reason, I'd expected something more somber and mature. But he made it come alive and I enjoyed it very much. He appeared to be the most experienced narrator, building and releasing tension, pulling the listener into the story, where other appeared more to be impassively telling the story. Also, it made me really want to see a filmed adaptation set in the proper time period, with horses and carriages! What a marvel this would have been for a Victorian village!

I rather liked Jason Isaacs' reading of The Island of Doctor Moreau. A sort of horror story, with ruminations about religion, morality and ethics, themes that are still relevant today, some even more so.

Hugh Bonneville's reading of The Time Machine was fine. He felt like a scientist who was caught up in an experiment. Methodical, curious, professorial. Taking note of what he saw and experienced.

I was unable to finish First Men in the Moon. It was interesting to hear the imaginings of an eighteenth century man about what the moon would be like, and how it would feel to be there, but it got tedious for me. I may go back and try again, but I have too many books in my queue for now.

The Invisible Man is less sci-fi and more about what would happen if you had this condition or power. It's kind of more like a super-hero story which focuses on the villain.

A negative observation about the production: There is an appalling number of editing errors in The Invisible Man. On numerous occasions, lines are repeated sometimes multiple times. Also, more than once, Sophie Okonedo stumbled on words; these mistakes should have been edited out. One or two errors can be overlooked, but, over time, the many errors became a big distraction, causing aggravation. There really is no excuse for this.

Don't listen to that other review! It was made by a Caddy Old Sod! (sorry american) but in all honesty the review does not give it justice and feels more like an act to be able to return the book. I think it is absolutely beautiful! Tennant does a phenomenal job and in no way is it monotone or robotic. A large percentage of the book is inner monologue and he does have his accent out full bore which may have been too much for "some" listeners but it is NOT dull.

David Tennant was especially good narrating The War of the Worlds as was Jason Issacs doing The Island of Dr Moreau.

the biggest drawback of this collection is the intro. I recommend skipping it and enjoying the book. I've never had an audiobook I didn't finish, but the intro on this one just about caused me to delete it before it got to the 1st story.

all of the works contained in this bundle were amazing, im ashamed to say i have never been much of a reader so i havent had much of an appreciation for the works of men such as HG Wells outside of hollywood adaptation, but im happy to say audible has changed that, i listened to each of these strait through and every single narrator captured the emotion and had the vocal range to make you imagine the different characters. if you are concidering HG Wells, this is the one to get, amazing performance plus value, top notch all around

rest of the book was fine, good narrators and bad, some engaging stories, some not

How I wish that you could jump to individual books or at least have a chapter listing available in PDF! I'm having to endure First Men in the Moon to find the beginning of The Time Machine, one of my favorites.

I love this collection. HG Wells is one of my favorite science fiction writers. That being said. The narrator in the beginning makes and error. He says that blade runner was thanks to HG wells. When we all know that Philip k dick’s “do androids dream of electric sheep” was the inspiration for that movie. Other than that. Love it. Love everything about it. Buy it!!

I was really looking forward to listening to this audible book. Unfortunately, the narration was of such low quality that I couldn't listen to any of the stories in full - the worst of the lot was The War Of The Worlds, which in my opinion is the best book by H. G. Wells, was completely ruined by David Tennant who seemed to believe that the narration should be performed like a speak and spell with a Scottish brogue was a good idea. I am returning this book.

Classics! Especially War of the Worlds

I read War of the Worlds when I was a kid. I forgot how wonderful the original story was written and told. So glad I listened to it again! David Tenant was great as narrator. My favorite of his

H.G. Wells passes Aug 13th, 1946. I was born later but that date and Alfred Hitchcock was born that date. I say that's why I love sci-fi and fantasy with a touch of dark.

The First Men on the Moon - As we know more it is probably more fantastical then when originally written but still good.

The Time Machine also a classic but my brain pictures the film version. especially the iconic build of the time machine.

The Invisible Man still a shock at how violent he was. More sinister. Not sure I had ever actually read this one. To me the personality of Griffin is negative already. Could a better soul make things work differently? Different time frame - probably not. The masses would be just as afraid today of that kind of unknown.

The Island of Dr. Moreau - This one is more horrorific too. I hadn't read this one before. Most fast paced story of the group. Harder to believe with modern knowledge but if you put that aside the look at the natural behavior of man and beast is interesting. Animals suffer today because of humans - loss of environment, testing, hunting, and more. So have we really evolved? No.

Hey! Let's have insufferable Eli Roth babble self-promoting nonesense in the foreword! What a shame...