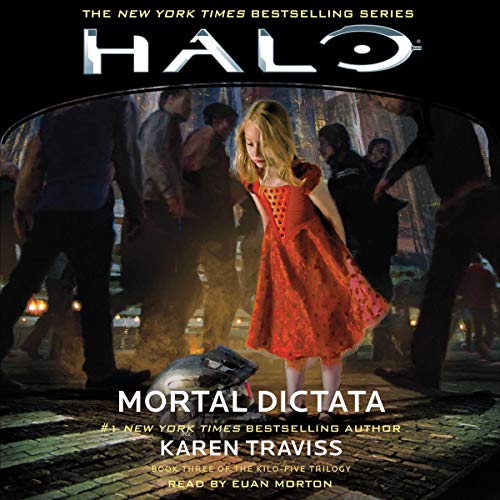 The final novel of the Kilo-Five Trilogy by number-one New York Times best-selling author Karen Traviss - part of the expanded universe based on the award-winning video game series Halo!

It's 2553. With the 30-year-long Covenant War finally over, the Office of Naval Intelligence faces old grievances rising again to threaten Earth. Angry and bitter colonists - still wanting to settle scores from an insurrection put on hold for three decades - crave justice...as does a man whose life was torn apart by ONI when his young daughter was abducted for the SPARTAN-II program. Black-ops squad Kilo-Five now find its collective loyalty tested beyond the breaking point when the father of their Spartan comrade, still searching for the truth about her disappearance, prepares to glass Earth’s cities to get an answer.

How far will Kilo-Five go to stop him? And will he be able to live with the truth when he finds it?

The painful answer lies with someone long dead and a conscience that still survives in the most unlikely, undiscovered place....

The Kilo-5 trilogy is the best of the best when it comes to Halo. The story is gripping, the characters are believable and enjoyable and Euan Morton brings it all together brilliantly. I wish that he would Narrate more books because 343's decision to use Scott Brick as their main narrator has utterly killed any of the books he narrated for me. Bring back Euan!

Amazing Karen Traviss need to get on this again and write more about kilo 5!! Amazing story!!

I truly love this book heart pounding and sensational novel, it sparks something remarkable inside

it's a must read, and I recommend for anyone, but read the first one first.

it makes you sad to see these people go I hope they get another arc!

Kilo Five is to be a SciFi staple.

The Kilo Five trilogy, born out of the Halo universe. Is a gripping thrill ride. A must for any Halo fan. But can and does stand on it's own. A great read for any SciFi fan.

the narrator made this book come to life truly. it fills in so many holes in the imagination from the kilo 5 sub series and will hold you on the edge of your seat till the very last word in the epilogue. THIS BOOK WILL NOT DISAPPOINT!!!!

I only wish there was more about this team to read about . I suppose someone will add to their story in some way but it wont be the same.

What an incredible book. Funny, shocking, and heartbreaking. One of the best of all the Halo novels. I was riveted by the entire trilogy but the conclusion was the best by far. Enjoy

good character interactions and development. the storyline is nice and linear tying together in the end. bit of a love story amongst it and good closure.