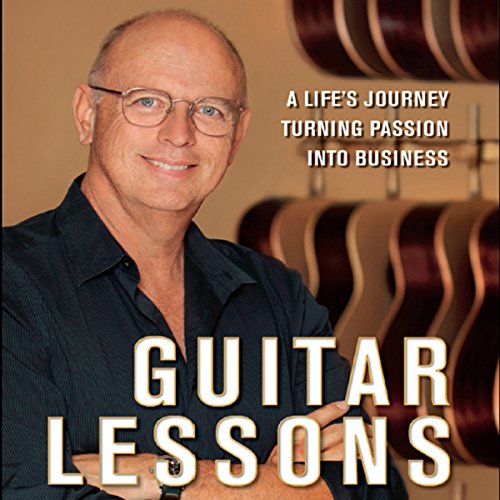 From the "a-ha" moment in junior high school that inspired his very first guitar, Taylor has been living the American dream, crafting quality products with his own hands and building a successful, sustainable business. In Guitar Lessons, he shares the values that he lives by and that have provided the foundation for the company's success.

Be inspired by a story of guts and gumption, an unwavering commitment to quality, and the hard lessons that made Taylor Guitars the company it is today.

If you're interested in guitar making and how to run a business this is a good book. I would have liked it if the author read it but the reader does a fine job. AUDIBLE 20 REVIEW SWEEPSTAKES ENTRY

Bob Taylor has so much to be proud of in building a great guitar business. The story, though, is more about how great is the business. Dull...

Great for anyone starting a manufacturing business

Would you consider the audio edition of Guitar Lessons to be better than the print version?

I purchased the Kindle version which was good. There were a number of things I went back to review easily on my Kindle. I also recently started adding notes to the audiobook in the Audible app (Android) because they sync with my Kindle. The new Whispersync for Voice feature, where you switch between reading on Kindle and listening on the Audible app without losing your place, has increased my listening.

What other book might you compare Guitar Lessons to and why?

Taylor shares his personal journey in detail, but leaves some of the business aspects to more vague generalizations. As someone who's starting an instrument business I would've appreciated his insight on managing cost, sourcing and importing materials, and managing dealer relationships. On the other hand, as a fan of Taylor Guitars and a life long student of guitar, I was impressed with Bob's commitment and passion to the art of guitar making. He's found a balance between hi-quality mass production and exceptional craftsmanship. I suppose a book from one of the popular celebrity chefs (Bobby Flay, Mario Battali) may be of some comparison.

I liked the pace and tone. Some narrators can be too dramatic and focus on performing more than simple clarity and timing. Anthony did I nice job.

Time permitting, I could have listened in one sitting. I was very eager to hear the details of the business. When that seemed less of a priority in the story my reading slowed.

I'd like to see Audible publish more titles related to the music business. I know there are a number of biographies currently available on Kindle that are not on Audible.

Bob Taylor is my new hero!

Where does Guitar Lessons rank among all the audiobooks you’ve listened to so far?

Guitar Lessons is one of my favorite audiobooks ever.

What was one of the most memorable moments of Guitar Lessons?

The entire story was fascinating and inspiring, but "Sticking our Necks Out", about the innovations Taylor made in guitar necks, and "Making our Case", about Bob's decision to have the company start making its own cases, were my favorites.

What does Anthony Gettig bring to the story that you wouldn’t experience if you just read the book?

Gettig captured a lot of Bob's enthusiasm and passion for his business. He mispronounced "La Jolla" though.

I found myself smiling throughout the book and laughed a few times. It was one of those that had me taking the long way and listening in the garage. The hours flew by!

Bob's story is a great testimony to the value of vocational education in our public schools. He's one of the most successful craftsmen of his generation, a man who literally changed the way guitars are made and marketed, and he got his start taking shop classes at his public junior high and high schools in San Diego.

Where does Guitar Lessons rank among all the audiobooks you’ve listened to so far?

This was an easy listen, and very memorable.

I appreciate the fact that he speaks openly about his shortcomings and his successes.

Essential reading; chapter 8 could be textbook!

If you could sum up Guitar Lessons in three words, what would they be?

I am familiar with Bob's story as I have followed his career and even sold his guitars and hosted Taylor workshops for a season in my career. (Full disclosure, I am a professional instrument builder). In my experience, even those who are not fans of his guitars have great respect for the man, what he pulled off in one of the toughest industries to make a profit (I know of), his dogged perseverance, and willingness to improve every step of the way. Beside that, he is genuinely a good guy! My take away is chapter 8 where he gets an aha moment about batching: "Would you rather have one finished guitar or 10 unfinished guitars?" (tying up cash flow, the bane of many serial builders).

Would you listen to another book narrated by Anthony Gettig?

Narration was good, not great. Pronouncing La Jolla as "La-joe-la". (There were a few more that were annoying). Anthony's voice over voice is good and upbeat though! Here is a case where I wish the Author did the actual narration. Bob is a soft spoken shy person, but that may have worked much better here. Too bad! Hope he takes a crack at it for a later "Bob himself" edition!

"Figuring it out" "One guitar at a time" but I propose that he does an expanded textbook seminar of chapter 8 of the same title (Audible chapter 9). In that chapter, he touches on workflow concepts that plague many a guitar builder and even other businesses could learn from it too. (The fallacies of "Batching") If Bob did a workshop/seminar expanding on that chapter, I know I would go!

I have always found the story of Taylor guitars inspiring. People know them as one of the great American guitar manufacturers. What they don't know is the backstory of how they survived, indeed, overcame the trails and vicissitudes most would have quit at. Anybody entering this brutally difficult to profit from business (or any, for that matter) would do well to check this book out!