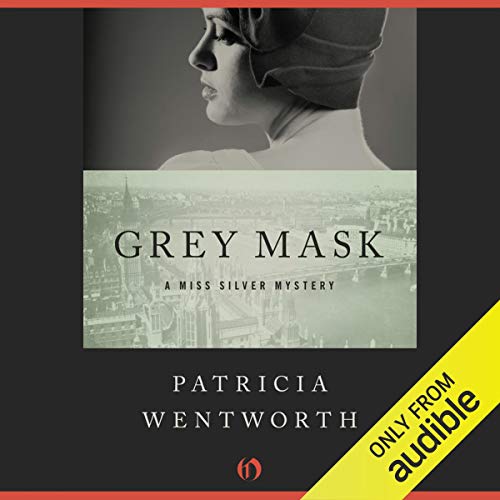 The first of the classic mysteries featuring governess-turned-detective Miss Silver, who investigates a deadly conspiratorial ring.

Charles Moray has come home to England to collect his inheritance. After four years wandering the jungles of India and South America, the hardy young man returns to the manor of his birth, where generations of Morays have lived and died. Strangely, he finds the house unlocked, and sees a light on in one of its abandoned rooms. Eavesdropping, he learns of a conspiracy to commit a fearsome crime.

Never one for the heroic, Charles’ first instinct is to let the police settle it. But then he hears her voice. Margaret, his long lost love, is part of the gang. To unravel their diabolical plot, he contacts Miss Silver, a onetime governess who applies her reason to solve crimes and face the dangers of London’s underworld.

The shaky first of a long, strong series

Grey Mask is not like any of the later Miss Silver mysteries. It's the very first (1929) and is complex and implausible to a degree that isn't forgiven in modern thrillers, but obviously was taken in stride in the '20s. Like another reviewer here, I had to start over to figure out what was going on. Unlike a different reviewer, I don't think Miss Silver was "barely there" --- she came in late, as always, after substantial character development early on, and if anything she had a more active, physical role than in any of the other twelve or so of these I've listened to --- she tracked people on the street, she searched a house! Well, she was younger then.

Remember that Miss Marple is not the model for Miss Silver: it was the other way around. Miss Silver was published first, and pretty annoyed Patricia Wentworth was about the "homage" Agatha Christie paid her. Killer character idea, though, as we can clearly see from the fact that both authors succeeded and are still popular, and many are their descendants, informal female detectives right down to the cozies of present time.

Grey Mask is well worth listening to for anyone who follows these easy-listen mysteries, to see how much more sensible Wentworth's plots became, and how much more charmingly predictable and knitterly Miss Silver became. And because ---------- however absurd the plot, it's GOT something. The story has life, you like the characters, you want to know what happens. Miss Silver has staged a revival and that's a good thing for those of us who want a little relaxation reading about an old friend we know well.

Miss Silver was in this book? Just barely

I thought that Miss Silver was going to be a pivotal part of the plot but she barely plays into it. The story was engaging and the narrator, excellent but for me, the focus should have been more on Miss Silver and her sleuthing.

I loved that Charles tried to save everybody without giving up his true love. However I wish Ms. Silver played a more prominent role in the book. It was great to go back in time when women were dainty and men are gentlemen.

I like this story and it's twists and turns. Unfortunately, I had to restart it 3 times before I could follow the beginning.

What did you love best about Grey Mask?

The story was so good. I didn't want to put it down.

She kept me guessing until the very end.

I would give away a surprise but the best scene is near the end.

If you can only read one of Ms. Wentworth's books, which is a very sad predicament indeed, but if only one, read this one. Her books are all on a high level of story, characters and flow. Someone who can write so many great mysteries of this type is amazing. Not since Christie herself I shouldn't wonder.

I love all Patricia Wentworth’s British mysteries.
I think she is a on a level with Agatha Christie
Her mysteries are colorful, clever and well written.
The characters are interesting.
Miss Silver , the private detective, helps the characters solve the issue. Very Miss Marple.

I was not expecting to enjoy this book as much as I did. I did not want to put it down. The story unfolded at just the right pace, and the revelations about the characters' motivations were not made too soon. As they are first introduced, the reader is led to believe they are one thing and only as the main character who has just returned after a four year absence begins to investigate what happened four years earlier and what has been going on since, does the reader become enlightened. I was so glad NOT to be in the aggravating position of knowing more than the lead. When you find yourself thinking "How can he or she be so stupid?!" The one thing I would caution is that readers understand the period the author knew and wrote about. It would be useless to expect an author who was born more than 100 years ago to write as one who was born 40 years ago. Even with that, the mystery story is great and not one that has been told over and over. As much as I enjoy Miss Marple and Poirot, I don't want to read, listen or watch the same stories over and over and over. Patricia Wentworth, the author, and her style of writing is a treat! And Diana Bishop, the narrator, is wonderful in her ability to voice each character and help the listener become lost in the story.

Miss Silver is apparently Miss Marple taken out of her village and forced to make a living, but there wasn't enough revealed about her to know for sure. However, like Miss Marple, she is able to maintain an unerring penetration of understanding while busily knitting. Also I found the other characters to be either relatively unsympathetic or downright irritating. It isn't a good sign when one winds up wishing the death-threat would actually succeed! I think part of my reaction is owing to the talent of Ms. Bishop in bringing to life a character who talks non-stop drivel. I expect the character was supposed to be charming, but I just wanted the bad guys to cart her off so I wouldn't have to listen to her any more. The mystery itself reminded me of Saturday afternoon matinee movies popular in the 40s and 50s: a rather overwrought idea presented in predictable plot-points and played out on stock sets with uninspired dialog. I couldn't help visualizing the whole thing in black and white.

Would you try another book from Patricia Wentworth and/or Diana Bishop?

I tried 2 more by Wentworth and found all three books to be the same story, just different names. Narrator Diana Bishop is superb.

In this first book, I was mildly surprised. But that's because if you pay attention, each most viable suspect - the poor relation, the jealous lover or competition, the disgruntled retainer - are all eliminated, one by one, until the LEAST LIKELY person is left standing. By the third book, I figured it out right away.

Which character – as performed by Diana Bishop – was your favorite?

Probably not. Mrs. Silver is not as well-developed as a Miss Marple or Hercule Poirot. She's just not very interesting enough to carry a feature film. Maybe a television series.....

There's nothing overall wrong with this series. Just don't fall for the description "like Agatha Christie" as I did. Because Wentworth is not even close. These books are good for their era and as long as you wait 6 months between each in the series. I can read Agatha Christie books one after another, even a second and third time each, and still not figure out the plots. I was looking forward to listening to all of this series. However three is enough for me!

Fun and mindless British mystery. I did guess the culprit quite a bit before the end but I wasn't 100% sure. I agree with others that the main detective doesn't get enough time on stage. I'd at least like some background on her. But since others assure me she plays more of a key role in future books of the series, I'll likely read/listen to more.

I’m sure back in the day the book was groundbreaking and exciting, given the social restrictions of that time. But as a modern woman, it’s really difficult to listen to the story and hear the way women were portrayed, even by their own sex. so, bear that in mind, when deliberating a listen.
Also, story was a bit boring.