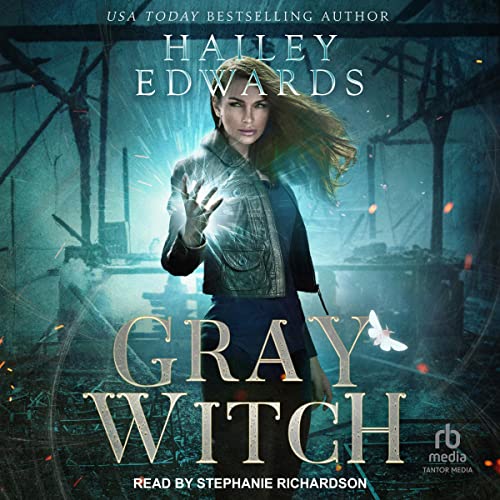 Famous monsters are resurrecting across Mississippi, each one recreating their own gruesome deaths through new victims. Every time Rue pins down one horror legend, another appears with its own bloodthirsty agenda. The summoners raising these vengeful spirits save their best for last, a cruel gift that shatters Rue. But she's not the only one whose heart gets broken.

Once her father realizes what the summoners have done, who they've awakened, there is nowhere they can hide where he can't find them. After this final betrayal, there are no limits on how far he's willing to go to bring down Black Hat, the director, and anyone else who gets in his way.

Including his own daughter.

Nothing Gray about this series!

I listened to all in this series, even buying more credits to do so. Love these characters and storyline. It took a while to get use to the voice of the demon side of Asa, but now can’t hear it any other way. Team Gray Witch & Family!

I loved this series of books. Well-written, filled with action and romance, without unnecessary graphic sexual descriptions.

An excellent continuation of a fantastic series. Absolutely enthralling. The slices of life between cases make the story irresistible.

This book takes us on a new path as Rue and the gang are being sent on the path of several different murders and the cases all of a sudden begin to feel familiar. We have the whole gang of Rue, Clay, Asa and Colby. I LOVE watching the 4 of them working together as a team.

Rue and Asa's relationship is progressing nicely and it is a joy to watch the two of them finding their way forward with each other. In addition to that, Asa's father (the King of Hael) decides to pursue Rue and is becoming extremely forward with his intentions. Rue decides she has had enough and learns certain spells from Asa on how to rebuff his advance's.

Then, it suddenly becomes apparent that something is going on that seems calculated - these events are not random. Without going into spoilers, let's just say that the drama gets pretty intense and we have some crazy appearances of Rue's Father (and Mother) and some crazy, crazy happenings.

Rue has to deal with her feelings of abandonment and how it has impacted her self-worth in the past. She then realizes that having her "gang" surrounding and supporting her gives her the love and confidence that she never knew she needed.

In the end, she makes some decisions that are going to change the total playing field going forward. Is this good or bad?