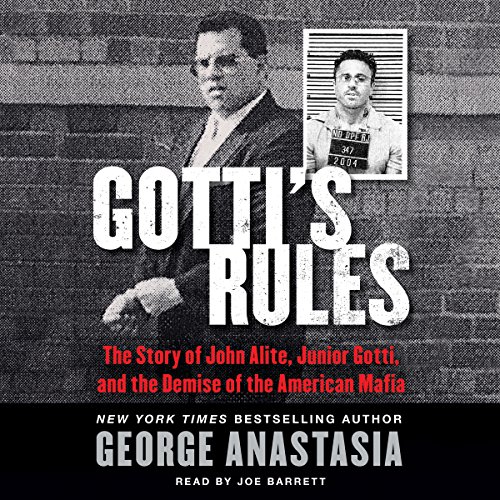 The notorious Gotti family is the stuff of mob legend. The "Dapper Don", John Gotti Sr., and his son John A. "Junior" Gotti ran New York's powerful Gambino crime family and were well known for their flamboyant style and brutal ways, an image perpetuated in popular Mafia mythology.

John Alite, a mob hit man, associate, and close friend of the Gottis, has a very different story to tell. An Albanian-American from Queens, Alite was an unlikely ally to the Gottis and the Italian mob, but with his street smarts he was eventually recruited to be Junior Gotti's protector and muscle. For decades Alite worked as a thug, drug dealer, and murderer for Junior Gotti and his infamous father. Although he reaped the benefits of working under the powerful mob figure, Alite discovered firsthand that the legendary American Mafia - an organization that claimed to be built on honor and loyalty - was nothing more than a facade for the hypocritical, manipulative, and greedy criminals like the Gottis who ran it. Following a harrowing sentence in a Brazilian prison (a system considered among the worst in the world), Alite was extradited to the United States in 2006 and agreed to help the feds put Gotti Jr. and his fearsome crime family behind bars. No one was better placed as an informant than Alite - the man who knew the real truth about the Gotti family.

In Gotti's Rules, veteran true-crime writer and prize-winning reporter George Anastasia gains unprecedented access to the Gotti crime family's stories and secrets, including its fascinating "Gotti Rules" of leadership. Based on extensive FBI files and exclusive interviews with insiders and experts, particularly former insider John Alite, Anastasia's unparalleled access demystifies the infamous Gotti family and its larger-than-life legend and provides irrefutable proof of shocking allegations against Gotti Jr. that have never before been confirmed.

Very powerful book. George Anastasia is fantastic as well. Alite has a way about him that just makes you want to have been there through his journey. I love John Gotti Sr. But this book shows us how different father and son can be. John jr was a pretender. He was not a legit street guy. He traded on his fathers reputation. That is the only reason he did not end up whacked a long time ago.....

Very quick read. Well written and researched. I expected no less from George Anastasia. I ve never been let down by any of his work and this lived up to what I've come to expect. Thank you for another great book.

What did you love best about Gotti's Rules? Exposing John Gotti Jr as a Snitch What did you like best about this story? Exposing John Jr. Have you listened to any of Joe Barrett’s other performances before? How does this one compare? ok. If you could give Gotti's Rules a new subtitle, what would it be? Snitch Son....The truth about John Gotti Jr Any additional comments? Great book, shows that John Jr was a douchebag snitch

Great to listen to easy to understand the story has you hooked It's amazing how much a human can go through and grow.

This was a good long story of real stuff .

This reminds me of the old days in Brooklyn. It was rough growing up in Brooklyn in the 90s.

This book is okay as such books go. The narration is above average and I had no difficulty following the storyline. It's as advertised, no less, no more. But having seen many a fatuous author taken in by these guys I think one should keep in mind that most of them wouldn't know the truth if they met it walking down the street. Exceptions exist of course but in the main these mafioso are degenerate liars. I find it helpful to take anything these professional flimflamers say with a huge bucket of salt.

im glad I didn't pay for it

i usually live gangster books. this one was poorly written and hard to follow. two thumbs down!