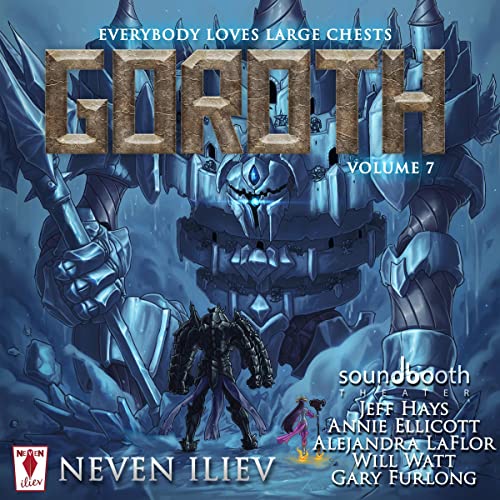 At a glance, the dwarves and gnomes of the Horkensaft Kingdom are two peoples who are worlds apart. The former are seen as hardcore traditionalists hell-bent on maintaining the status quo, while the latter only look ever forward and upward as they grasp at the future with both hands. And yet, these two seemingly opposing cultures serve as a counter-balance to each other, creating a civilization that draws upon the wisdom of the past to face new challenges. Whether that is actually the case or mere propaganda will soon to be put to the test, as they are about to receive a visit from the Hero of Chaos. The enigmatic herald of change has already fostered a well-deserved reputation for setting things in motion by their presence, and only time will tell if the Kingdom of the stout-folk will survive the impending transition.

Though, once again, Boxxy doesn't actually care what ripples it causes. It isn't there to upset society or challenge the stagnant culture of all-work-no-play. Its goal is to track down an errant treasure that escaped its grasp while it was out of commission, and maybe secure some new pieces for its ever-growing collection along the way. Before it has a chance to, however, it must first deal with a significant issue that threatens to undo much of its work since its arrival in Azurvale. It is a challenge unlike any it has faced, and not one that it can hope to solve easily through force and violence. The limits of Boxxy's patience and self-control are about to be tested, as it looks desperately for a way...to leave the house.

Great but Too many spoilers for Fizzy’s book

Honestly I swapped to Fizzy’s book after getting half of it spoiled by this book. Read up until they sort of intersected about a storm. That’s the only detail I’ll say. Then swapped back and finished this one. Should have started with Fizzy I guess then swapped back and forth but it’s impossible to know what will be spoiled. Just swap when the storm comes up. Like immediately. Don’t finish the scene. Just swap. Oh and I really wish Soundbooth as talented and great as they are would get their app in order. It’s kinda horrible. But otherwise excellent job on recording and a cool addition to Boxxy’s story.

There's such a thing as to much background noise.

great story, great continuation of boxie doing ridiculous boxie shenanigans... but unfortunately this particular title at times has a distractingly loud amount of background noise that is hard to not get distracted by sometimes.

The series is starting to get repetitive and dragging on, there's only so many times it can hit the same few jokes on the same plot loop of Boxy getting in trouble, a overtop fight the likes of which never have been seen, then nothing. This one lacked anything really unique, no caramelldansen demon summoning, no question getting punted through the walls, not even multiple nut arrows, it felt, everything was just a joke made in a previous book reiterated. As for the narration it's ok, often times the music drifts on after it stops matching the scene only to randomly stop a few minutes later, the voices from the same person are slowly getting more or less the same.

I think this book is one of those one offs that just isn’t at the same quality as the rest of a series.

First of the boxy books I couldn’t wait for it to be over. Not sure what happened. Also the sound effects were annoying in some places.

Like they just said hmmm let’s throw something random here.

Overall quality of this book compared to the others in the series was subpar.

The book was great, and the story followed the rest of the series as well, but it feels like half a book. I feel a bit jipped paying full price for half a book.

the background noises are far too loud. there's time you can barely focus on the narration over the sounds in the background, especially in dungeon. the story I feel has moved more back towards the boxxy we know and love vs the previous book (though I don't understand the sudden influx of "snack time" when boxxy use to be against doing it too often. the increase in "reward time" with snack just doesn't follow his normal mindset. but honestly, that can just be seen as boxxy subconsciously being grateful for snack helping. my biggest complaint is the background noise volume. really hard to focus on the story while driving, when I have clinging and banging loud enough to rival the speakers.

Look, I know some folks enjoy the "full audio experience" or whatever but I simply cannot stand these sound effects. They're distracting, annoying, and overwhelming. There are times you can't hear the actual words over them. The story and narration remain top notch, as always. I just REALLY wish there were an option for no sound effects.

I love the ambient sound!

man this series is great, I love it, but what I love the most is the quality of this audiobook! with the audio effects I'm able to submerge so much better in to the story. huge success! please do it again!

Seriously. Don’t change a thing- the audiobooks are worth the wait. The writing is amazing, story is great, characters are great, Jeff is great (despite the end of this book)….Please, don’t let anyone tell you to “speed it up,” or “tone it down” in any way.

Thanks for making such a great and entertaining series.

No idea what some people here go on about this being "overproduced" or "annoying underlying sound effect". I love how they did that, it's not too overbearing but still manages to help draw a more vivid picture in my mind on what's happening. Only exception from this is the music, which sometimes is indeed about too loud and unfitting/ distracting against the narrative. Also, great narration cast.

I wish, more audiobooks would go through this effort on their production, because it really elevates the overall quality.

Fantastic job. I only wish the books of this series would be released more frequently because it's just so hard to wait for these.

No doubts the book is fantastic. but the performance does not do it justice. In the earlyer books a genius Jeff Haze read the books.
In this they felt the need to add a full cast, music and soundeffects. this is needlessly distracting from the content. Alste the overly dynamic (meaning loud) soud design makes it a constant struggle to adjust the volume while listening. This might all be ok while listening in the studio or maybe at home, but out and about this book is a nuisance. I can recomend the book but woul caution to chse the audiobook version...

I always enjoy th stories about boxy's proceedings though admittedly I am no friend of soundtracks in audio books finding them to be distracting.
let's move on to the next chapter.

Sound effects are a bit overkill

Apart from the sound effects, which can get a bit annoying, this is a pretty average installment in the series. Nothing unexpected; Boxxy does what Boxxy always does: Kill things.

The quality of narration as well as the sound effects are superb. The story is entertaining, funny and interesting just as in the previous books.
The only thing I regret is the book not being longer.

Constant ambient background sounds started to be a problem for me.

ELLC is a great series and we could see Soundbooth Theatre techniques evolve over the course of the series.
While some of my friends enjoy the improvements in immersion by those extra sounds, i could not.
I'd be glad for a simple narrated version with less voice actors, less sounds and quicker release cycles.

what is there to say, other than - this series is absolutly awesome!!!
Neven is at this point in time my absolut favourite autor and SBT did another flawless job!

really looking forward to the next one!