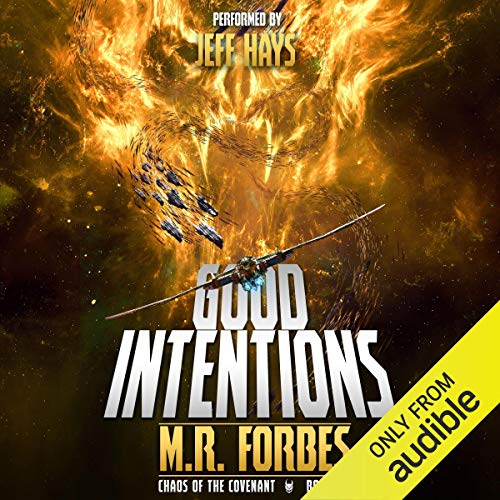 The galaxy is burning, and the Queen of Demons is ready to play with fire.

Queenie and the Rejects have found the Covenant, but it isn't anything they thought it would be. Never to be the one to give in, she has a new plan to fight back against Thraven and his armies, one that depends on beating the Nephilim at their own game. She's got the best of motives and the best of intentions, but, then again, the road to hell is littered with both.

It's time to go big or go home, and the Rejects don't have a home.

They'll just have to kick some ass instead.

Time for book 7. I love the twists and turns. Everytime you think you know where the story is going it takes another right turn. It is very hard to stop listening.

Well that was different

One thing that has proven true since book 01... The authors strong belief in no good deed ever goes unpunished. I can not recall a single case where Queenie hasn't paid in blood for anything good or beneficial. However that does not mean I haven't enjoyed these stories. I already have the last book in cue once I finish typing this.

The story keeps me at the edge of my seat! I can't wait for each chapter, and the final installation of this great series!

The M.R. Forbes and Jeff Hays duo again combine to continue to invigorate an already exciting series. As with prior books in the series, this one adds new tangents to the ever-expanding galactic web that threatens to enslave all of humankind and destroy all sentient life forms in the process.

Oh, did I mention something about dragons?