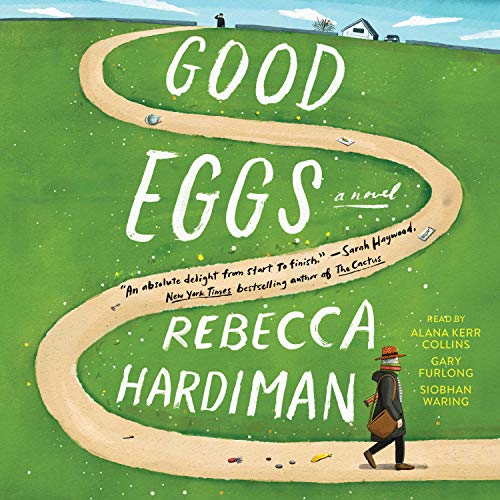 Named a Best Feel-Good Book by The Washington Post

When a home aide arrives to assist a rambunctious family at a crossroads, simmering tensions boil over in this “witty, exuberant debut” (People) that is an “absolute delight from start to finish” (Sarah Haywood, New York Times best-selling author) perfect for fans of Where’d You Go, Bernadette and Evvie Drake Starts Over.

When Kevin Gogarty’s 83-year-old mother is caught shoplifting yet again, he has no choice but to hire a caretaker to keep an eye on her. Kevin, recently unemployed, is already at his wits’ end tending to a full house while his wife travels to exotic locales for work, leaving him solo with his sulky, misbehaved teenaged daughter. Into the Gogarty fray steps Sylvia, the upbeat home aide, who appears at first to be their saving grace - until she catapults the Gogarty clan into their greatest crisis yet.

“Bracing, hilarious, warm” (Judy Blundell, New York Times best-selling author), Good Eggs is an irresistibly charming study in self-determination, the notion that it’s never too late to start living, and the unique redemption that family, despite its maddening flaws, can offer.

"Narrators Alana Kerr Collins, Gary Furlong, and Siobhan Waring each bring a unique range that enhances the heartfelt ties and comedic repartee of the Gogarty family. Kevin cares for a full house while his wife travels for work, so he's looking for some help. A new school for Kevin's angsty teen daughter, Aideen, and a home aide for his mother, Millie, seem like solutions but, instead, spark hilarious misadventures. Collins expresses Aideen's wrath at her family in harsh tones. Furlong is as great at portraying an exasperated father as he is at capturing sniveling children. Portraying Millie, Waring delivers a raspy timbre; when Millie attempts to fake senility, Waring switches to a girlish pitch." (AudioFile Magazine)

This story will lift you up

If you loved "A Man Called Ove," (and, I did) you will truly enjoy this novel. The characters are truly characters and delightfully wonderful. There's the nutter of a grandmother, the dad going through what can best be described as a midlife crisis, and the teenaged daughter who merely wants to fit in. By the end, I wanted to be a part of this family.

This was a fun, clever book that was a refreshing change to the fails and heavyweights out there. It works without trying too hard or mimicking everyone else's work. I didn't want this book to end! I'd love to read/listen to more from this author.

Fun and engaging for the 20 something to the centurion. Giggled aloud a few times as recognized myself in some of the pondering of both the young and old.

I enjoyed the vocabulary immensely. The description of the characters is spot on and very relatable. I frequently laughed out loud. Such a good release on a COVID-19 stress day.
Enjoy your family.

This story is about a complicated family told through the eyes of the matriarch, her son and granddaughter. Their unusual responses to life’s challenges are hilarious and engaging story. Highly recommend.

I almost never quit on a book,
but could not keep interest in this one.
Maybe it gets better, but I had to pull the plug. No one had any redeeming qualities.

A laugh from start to finish

Makes you smile right through. I loved every second of this book and the characters warm your heart

There's lots of reasons a book could be considered "good", even objectively.
This books real strength was the characters, well narrated by multiple individuals.
By the end of the book I felt like I knew the main characters and even identified with them in ways both trivial and profound.
This book (provided you enjoy the genre) is well worth a listen.