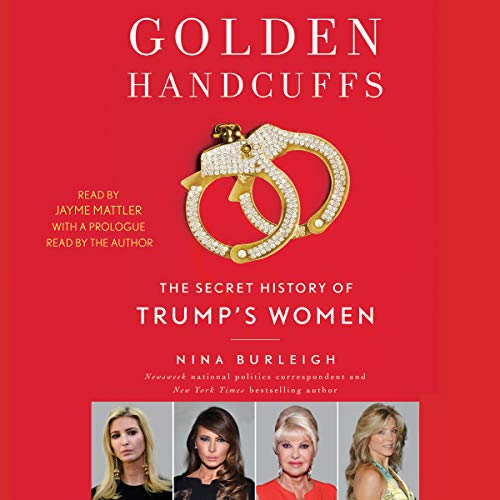 New York Times best-selling author and award-winning journalist Nina Burleigh explores “the stark details of the forces that shaped [Donald] Trump’s thinking about women” (The New York Times) in this comprehensive, provocative, and critical account of the six women who have been closest to Trump.

Golden Handcuffs is a provocative and “comprehensive exposé” (Kirkus Reviews) of Trump’s relationship with the women who have been closest to him - his German-immigrant grandmother, Elizabeth, the uncredited founder of the Trump Organization; his Scottish-immigrant mother, Mary, who acquired a taste for wealth as a maid in the Andrew Carnegie mansion; his wives - Ivana, Marla, and Melania (the first and third of whom are immigrants); and his eldest daughter, Ivanka, groomed to take over the Trump brand from a young age. Also examined are Trump’s two older sisters, one of whom is a prominent federal judge; his often-overlooked younger daughter, Tiffany; his female employees; and those he calls “liars” - the women who have accused him of sexual misconduct.

Pretty interesting but I didn't always love the writing style, and the narration was just average.

Content and story: some of the content is doubtful (e.g., complimentary descriptions of Trump’s mother’s mannerisms and supposedly attentive behavior seriously at variance with other accounts written by journalists and historians more knowledgeable of Trump’s FOG).
Uncompromising analysis of trophy wives and uncompromising acquiescence of misogyny in exchange for extreme wealth is believable, pathetic, and allows why filthy rich men are so horribly chauvinistic.

Predictably, a radically liberal author attributing the Trump presidency to an “uneducated” and “irrational” citizenry as opposed to a conscientious repudiation of the political class by the electorate. What must it be like to feel so intellectually superior to so many?

You should read other books about his family and compare. It's an ok read just not sure about some facts. Keep an open mind and remember it is possible some things are not quite right.

This is not a novel written atmospherically!
You should re-record this with a man. Sorry to be sexist. But the book is information not pensive discovery. Nothing wrong with the reader. But annoying for this material

The reality of it all.

A great deal of research was done with this topic. Giving details on all "these women", causes a pause for a reality check. Life continues, and not much will change. Moving onward.

Very well written book about Donald Trump's womanizing & cheating on all of his three wives.