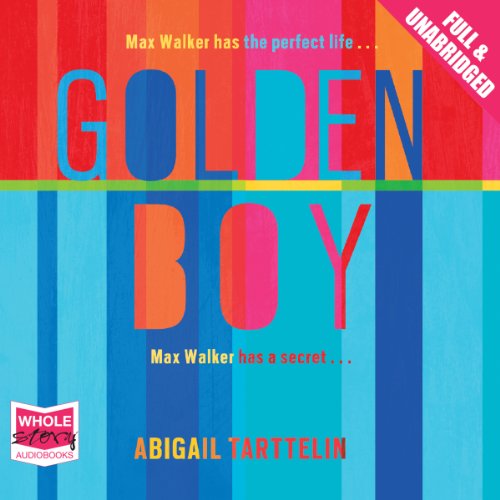 Max Walker is the golden boy. He's attractive, intelligent, athletic. He's even nice to his little brother. Max is going to pass his exams with flying colours; he’s going to make his parents proud.

Max Walker has a terrible secret that could blow his perfect life apart. But someone knows his secret, someone close to him who could do great damage to Max. In fact he's already started…

Where does Golden Boy rank among all the audiobooks you’ve listened to so far?

The BEST. A story so beautifully told and compelling, I couldn't put it down.

The story told from various points-of-view gave significant depth to the thought processes of each character.
Max's story-line will always remain with me.

What disappointed you about Golden Boy?

Max is a teenager who, on the surface is the golden boy at school, but lurking behind his Y-fronts is a secret to all but his immediate family: Max is intersex, an hermaphrodite.

I don’t know where I heard this book being highly praised but I had many problems with it and can't believe all the plaudits and five stars.

- There’s a rape in the opening pages of this book. But the author refuses to mention the word rape once throughout the whole book. This seemed like a major cop out to me. I got the impression she was afraid to get into the “blurred lines” and call a rape a rape.

- There’s a 10-year-old boy in this book. And the author clearly knows no ten year olds and didn’t bother to check any out. The ten year old acts like a five year old throughout the book. There’s even a line where he’s whinging about "story time" in school. Story time! Ten year olds do not have story time. They read full novels on their own. This was so sloppy that it made me lose all confidence in the author. And then later on this 10 year old, who acts like a 5 year old, has these small bursts of intelligence that are way above his station. Wildly inconsistent.

And I have to say the whingey/whiney/childish narration of the 10 year old really sealed the deal for this character to ruin the book.

- There’s a part where a doctor suggests to Max that when he talks to himself in his head, it might actually be a unborn twin talking to him. I repeat, this was said by a doctor, a specialist. This is the kind of badly researched nonsense that popped up now and then.

- This really came across to me as a YA book. I’m constantly annoyed at hearing of a book getting really high praise, without mentioning the context of YA. In my experience YA books often lack depth, maturity, authenticity, and intelligence.

- I couldn’t help comparing this book to Middlesex. Which is such a better book in every way. Golden Boy is Middlesex-Lite. If you’re curious about the subject matter, do yourself a favour and read Middlesex instead.


What reaction did this book spark in you? Anger, sadness, disappointment?

Having said all that, even though I was often very frustrated, and driven demented by the 5-year-old 10-year-old, I was never bored, and at times I even found it to be a bit of a page turner. But this definitely doesn’t deserve the 5 stars everyone else is giving it. Abigail Tarttelin definitely has potential but she will be cringing at this book when she has a bit more experience under her belt.