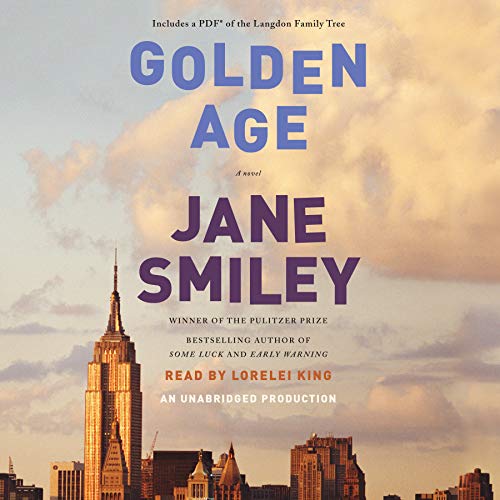 From the winner of the Pulitzer Prize: the much-anticipated final volume, following Some Luck and Early Warning, of her acclaimed American trilogy - a richly absorbing new novel that brings the remarkable Langdon family into our present times and beyond.

A lot can happen in 100 years, as Jane Smiley shows to dazzling effect in her Last Hundred Years trilogy. But as Golden Age, its final installment, opens in 1987, the next generation of Langdons face economic, social, political - and personal - challenges unlike anything their ancestors encountered before.

Michael and Richie, the rivalrous twin sons of World War II hero Frank, work in the high-stakes world of government and finance in Washington and New York, but they soon realize that one's fiercest enemies can be closest to home; Charlie, the charming, recently found scion, struggles with whether he wishes to make a mark on the world; and Guthrie, once poised to take over the Langdons' Iowa farm, is instead deployed to Iraq, leaving the land - ever the heart of this compelling saga - in the capable hands of his younger sister.

Determined to evade disaster for the planet and her family, Felicity worries that the farm's once-bountiful soil may be permanently imperiled by more than the extremes of climate change. And as they enter deeper into the 21st century, all the Langdon women - wives, mothers, daughters - find themselves charged with carrying their storied past into an uncertain future.

Combining intimate drama, emotional suspense, and a full command of history, Golden Age brings to a magnificent conclusion the century-spanning portrait of this unforgettable family - and the dynamic times in which they've loved, lived, and died: a crowning literary achievement from a beloved master of American storytelling.

"Smiley's cantering, far-reaching, yet intimate trilogy is both timely in the issues it so astutely raises (especially as Iowa is once again in the presidential election spotlight), and timeless in the rapture of its storytelling and the humanness of its insights into family, self, and our connection to the land. Readers will be reading, and rereading, Smiley's Last Hundred Years far into the next." (Donna Seaman, Booklist)

"Smiley moves into the future to complete the trilogy's century span.... What lingers with readers is her detailed depiction of the kaleidoscopic geometries of family, as the Langdons spiral out from Iowa into the larger world, endlessly fracturing and coming back together." (Publishers Weekly)

"Warmly affecting.... Smiley is a skilled storyteller. The story progresses year by year from 1987 through an imagined 2019.... Newly introduced characters are welcome additions to Smiley's vibrant gallery of fully fleshed characters, with Henry and Claire remaining the most ruefully appealing of the siblings we first met in Some Luck.... Despite dire events, the narrative energy of masterfully interwoven plotlines always conveys a sense of life as an adventure worth pursuing." (Kirkus)

The whole trilogy gives a brilliant, incisive, sympathetic, unflinching, and amazingly complex picture of white middle class America from 1920 to 2020. The characters are fully drawn and engaging. The personal lives and varied journeys of four generations of a family starting on an Iowa farm present a panoramic and developmental account of social, economic, political, and cultural history. The story ends just a little farther down the road than we are now, brilliantly detailing how we arrived at our current economic, political, and environmental peril. At the same time the exquisitely sensitive descriptions of life stages -- infancy, adolescence, marriage, work, and old age -- are deeply moving. This is trilogy makes me wish I was still a teacher. I would love to teach a full-year course on the history of the last 100 years using this as the main text with student reports on what she left out (mainly the experiences of people of color and working class, also a little of conventional "history" thrown in). I can't remember reading anything I thought was this great, at least not for a long time

Excellent read from Jane Smiley. Finishes her trilogy. You do need to read/listen to the first two volumes. The cast of characters is very large in this volume. We listened to the audio book for all three volumes. The reader was excellent.

Where does Golden Age rank among all the audiobooks you’ve listened to so far?

I would rank it near the middle 50%. Perhaps if I had listened to the earlier works, it would have been easier to follow.

Would you recommend Golden Age to your friends? Why or why not?

I would recommend reading the book, rather than just listening to it. There are so many characters, I needed to draw up my own family chart.

No, this is a really long saga. I listened to it over about 10 days.

I binge-listened to Jane Smiley's trilogy, beginning with "Some Luck." I feel as if I lived with her finely wrought characters and will miss them very much. What an accomplishment, to write a family saga that is both vast and intimate.

What disappointed you about Golden Age?

I really did try to like this book because I did like the first two in the series. However, after listening to it for over 2 hours, I could take it no more. The story was disjointed, boring, tedious.

What could Jane Smiley have done to make this a more enjoyable book for you?

Learn how to pronounce cities (Peshtigo), names (Alicia) etc. Stop reading the book and give some life to the performance. Be spontaneous. Add some life to your voice.

Would like my money back. Very disappointing. I've only returned 1 book in many years of listenership. This is the 2nd one.