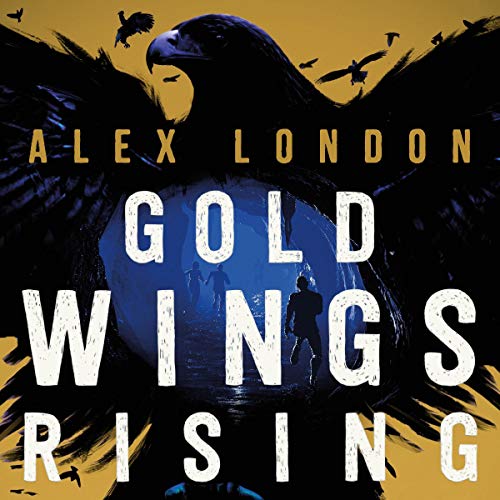 "In the final book of the Skybound Saga trilogy, narrators Michael Crouch and Brittany Pressley bring the necessary intensity to main characters Brysen and Kylee.... Crouch and Pressley's pacing complements the action of the story in this last installment, and they present different energies in their narration, strengthening the character development that has been building in the plot." (AudioFile magazine)

In Gold Wings Rising, the final installment of Alex London's Skybound Saga, Kylee and Brysen must fight for their lives and their humanity. Book 1 was a Today Show Book Club Pick!

The war on the ground has ended, but the war with the sky has just begun. After the Siege of the Six Villages, the ghost eagles have trapped Uztaris on both sides of the conflict. The villagers and Kartami alike hide in caves, huddled in terror as they await nightly attacks. Kylee aims to plunge her arrows into each and every ghost eagle; in her mind, killing the birds is the only way to unshackle the city’s chains. But Brysen has other plans.

While the humans fly familiar circles around each other, the ghost eagles create schemes far greater and more terrible than either Kylee or Brysen could have imagined. Now, the tug-of-war between love and power begins to fray, threatening bonds of siblinghood and humanity alike.