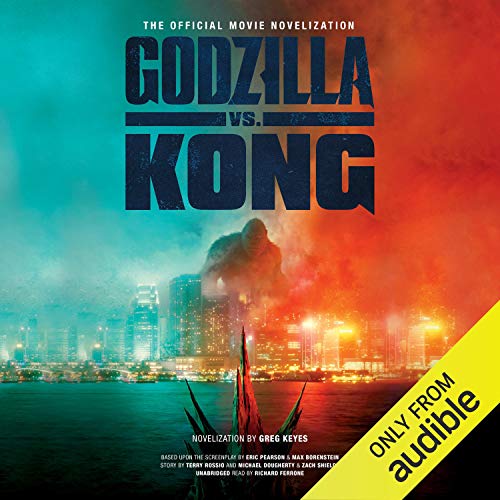 The official novelization of the biggest battle in movie history, Godzilla vs. Kong, the latest film in the Monsterverse franchise

Humanity fights for its future as Godzilla and Kong embark on a path of destruction that will see the two most powerful forces of nature on the planet collide in an all-out war!

Writer Greg Keyes returns once again to the Monsterverse and takes listeners deeper into the worlds of Monarch, the Titans, and so much more.

too much focous on humans, not enough gaint monsters. The handling of the human characters was rather poor. ShinGodzilla had better human scenes.

I love how they added a short story in there about Godzilla saving another Titan this was actually from Godzilla Dominion, one of the prequel graphic novels for Godzilla vs Kong. My only complaint is that I wish they chose Michael Braun to narrate the novel as he did a great job in King of The Monsters not that Richard Ferrone is bad I just don't think he can convey excitement especially during the monster battles as much as other narrators... Other than that great book for anyone that wants to expand their knowledge of the Mythology of the Monsterverse

Should've been the film but that's okay

Godzilla vs Kong the Official Novelization is what the film SHOULD'VE been but that's okay, as the film is being received with praise and recognition by critics and audiences, box office earnings are excellent.. I loved how the novel brought more context to the human storyline, such as Dr. Nathan Lind, Bernie Hayes, Mark Russell, Ren Serizawa, Maia Simmons etc.

The story is more fleshed out, and feels more of a sequel to KOTM, Skull Island, Godzilla 2014 than never acknowledging those films so much in the finished product like Outpost 23 (King Ghidorah resting place) in Antarctica and what happened after he came free.

The narrator is great, no problems with him.

I fully recommend this Novelization from a person who doesn't really read novelizations, as a huge MonsterVerse fan myself, I would pick up this book and audio for fuller context into the film if you felt disappointed or confused about the plot of the film if you care about the human characters.

Great Novelization of the Film with Extras

I enjoyed the prior novelization Keyes did of the prior film. This book is just as good. With extra scenes that give insight and explain things that were glossed over or left out of the film, (which I loved). Characterization is great and the novel is fast paced. The fight scenes are exciting and you learn more about Hollow Earth and what happened to the other titans after the last film. You also learn more about several of the scientists and Monarchs efforts prior to the start of this film. I read this book using immersion reading while listening to the audiobook. Richard Ferrone gave a great reading in a throaty story tellers voice.

butter than the movie

Wow, this story is so much richer than the tripe they put out on the movie.

More details than the movie

You need this book to appreciate what’s missing from the movie. More backstory on the human characters actually helps with filling most of the plot holes. Fun listen. Better than the previous book adaptation.

Great adaptation honestly enjoyed every minute of it! Definately would recommend getting it to anyone that comes across it!

The story was well worded. The narrator was on point I will listen to this one a few times thanks want more!!!

While the movie glosses over or omits the details altogether, this novel explains background and motives that drive the actions of some of the characters - humans and Titans alike. You connect a little better with some of the characters. I also finally understood some of the plotholes surrounding the Hollow Earth thanks to this book (even if they make literally no scientific sense, but this is a Kaiju story after all). However, the novel doesn't really describe settings and fast-pace events (I.e. fights scenes) that well. If it wasn't for the fact that I have seen the movie, I'd have a hard time picturing how the fights played out. Also Richard Ferrone does an okay job narrating. His performance her isn't as good as Michael Braun in KOTM. Braun was better at conveying emotion and striking awe in mentioning the titans. Ferrone's darker tone really only fits when he is narrating from Godzilla's perspective. Overall, this is a decent novelization, but I still think KOTM is the superior movie and audiobook.