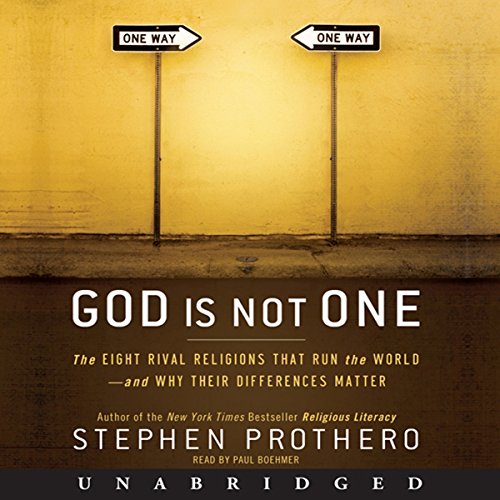 God Is Not One

At the dawn of the 21st century, dizzying scientific and technological advancements, interconnected globalized economies, and even the so-called New Atheists have done nothing to change one thing: our world remains furiously religious.

For good and for evil, religion is the single greatest influence in the world. We accept as self-evident that competing economic systems (capitalist or communist) or clashing political parties (Republican or Democratic) propose very different solutions to our planet's problems. So why do we pretend that the world's religious traditions are different paths to the same God? We blur the sharp distinctions between religions at our own peril, argues religion scholar Stephen Prothero, and it is time to replace naive hopes of interreligious unity with deeper knowledge of religious differences.

In Religious Literacy, Prothero demonstrated how little Americans know about their own religious traditions and why the world's religions should be taught in public schools. Now, in God Is Not One, Prothero provides listeners with this much-needed content about each of the eight great religions.

To claim that all religions are the same is to misunderstand that each attempts to solve a different human problem. For example:

Prothero reveals each of these traditions on its own terms to create an indispensable guide for anyone who wants to better understand the big questions human beings have asked for millennia and the disparate paths we are taking to answer them today.

“Provocative, thoughtful, fiercely intelligent and, for both believing and nonbelieving, formal and informal students of religion, a must-read.” ( Booklist)
“This book could well be the most highly readable, accurate, and up-to-date introduction to the world’s major religions.” (Harvey Cox, Hollis Research Professor of Divinity, Harvard University)

Ce que les auditeurs disent de God Is Not One

Useful, but doesn't live up to its introduction

I want to expand on the previous reviewer's comments, which I essentially agree with. The introduction to this book is a blast against both the regressive fallacy that one religion can be better than others and the progressive fallacy that all religions are in a lovey-lovey way all the same. This is not the case, he declares; instead, each religion has its own independent character and instincts, appeals to different needs and desires, and aims to take you to different mental places -- this is what he means by calling them "rivals". It's a bracing call for a full-frontal tolerant plurality without wincing away from points of contention. It's a promising thesis to begin a book with.

Unfortunately, that's as far as it goes. The rest of the book consists of eight essays concerned separately with a "major" world religion (sorry Sikhs, Jains, Shintoists, and Scientologists... nothing here for you) that, while pleasant to read/listen to, are ultimately nothing more than pedestrian glosses. This book is, in fact, a direct sequel to Prothero's previous book, "Religious Literacy: What Every American Needs to Know" which called for Americans to learn more about the religions of the world. As he say towards the end of the introduction, people were writing to him asking for a book to GIVE them that literacy. This is that book, and if that is what you want then this is the book for you. Each essay starts from basic facts, breezes through some history and contemporary issues, and ends there. Without a rhetorical connection between them the original thesis is nowhere to be seen. I was hoping for more depth.

There is still much of value here, particularly in the surprising choice of Yoruba as one of the major world religions. I like to think that I'm slightly more literate than most Americans when it comes to world religions, but was frankly ignorant about this West African religion and its many New World descendants. Touche, Mr. Prothero; consider me educated.

Little enlightenment to be found here

This is generally an interesting book, reviewing as it does aspects of the beliefs for eight major religions. However, it has significant flaws. It fails to tell us why the specific differences among these religions matters. Why are faith-based conflicts so pervasive and hard to resolve? No answer. What can we do to reduce the conflicts? Again, no answer.

Anyone who has read other books on religion will quickly realize that Prothero is presenting an incomplete picture. With the exception of a few remarks on Islamist violence, we learn nothing about the negative side of faith, in spite of the fact that this is apparent to anyone who reads a newspaper. Neither are we given a good historical review of the often violent conflicts among the faithful and shown how those conflicts originate in their different beliefs and practises.

The only group that comes in for criticism are the New Atheists, whom Prothero singles out for snide and dismissive treatment. I conclude that Prothero is in favor of faith in general and wants to reassure his readers that they should be comfortable with whatever faith-based beliefs they happen to hold. How will this kind of thinking will help humanity rise above faith-based conflict? How will this book will help us deal with the impact of these contending religions on the world? Prothero has no answer, except, it seems, that we should all keep believing.

To be fair, I bought this book to gain a better understanding of the world's major religions. I did NOT want anything biased, preachy or opinionated. This book delivered on all accounts.

That being said, it really was more like a textbook. There weren't many anecdotes to keep things moving and interesting. Listening to it was not what I would call entertaining, It is so informative and fact filled that it would probably be better to read the print version, as it would be easier to re-read parts. I think I missed a lot by listening to this book rather than buying the print version.

loved prothero's audio course Religions of the East. i listen to it repeatedly. but this book is mostly a rehash of that course and his writing is not as interesting as his teaching.

Outstanding book about the creation

And the creativity of man (and the lack thereof when he gets to the French enlightenment and all the utterly convinced atheists pounding tables with their shoes all over the world these days).

Remember that comparative religion course you always wanted to take as an undergraduate but never got around to because you had so many other core curriculum requirements?

This is it, only no exams.

I've listened to this book 4 times already. it's my favorite bedtime story, set timer to 30 minutes.

If you could sum up God Is Not One in three words, what would they be?

What other book might you compare God Is Not One to and why?

I don't know... It's a very good book if you want to learn about different religions.

Wow, this form is not really suited to this book...

No, anything with this much intimation must be taken topic by topic.

At first I was very underwhelmed by this book, but as it went on I changed my mind. I think that it is a book that all people should listen to because it is so educational. The author is a very good educator and I recommended this book to many people.

The only problem with this book is that the author made the choice to exclude one of the religions that I most wanted to learn about. The exclusion of Sikhism is forgivable but disappointing; at a time when many Americans assume that anybody with a turban is Islamic I think it is important for more people to learn about Sikhism.

In the introduction, Prothero makes the point that it is well intended, but ultimately disrespectful (at best) to speak of all religions as essentially the same; a different path up the same mountain. Despite his success at pinpointing the different goals for each religion, and the processes for achieving those goals, Prothero fails to adequately explain why the "different paths up the same mountain" metaphor is wrong, harmful, or otherwise misguided. Is it wrong to conceptualize nirvana as the "buddhist's version of heaven?" If so, why?

If the ultimate presription is understanding, why not use the mountain metaphor as a rallying point for all people, regardless of belief? Understanding can only occur if we can identify with each other's plight.

The author takes takes excerpts from the religious books out of context, thus falsely describing the text. It's hard to know when the author is accurately depicting the words drawn out of the religious text. Otherwise, it is a nice general overview of the religions.

Good but not excellent

The book did share a lot of good insights on world religions.

But it was a bit too long and could have made the same points in a shorter and more interesting way.

In general, I learned a lot from this book but the author's treatment of New Atheism is deeply hypocritical, uncharitable, and quite strawman-ish. Given his open-hearted approach to the other ideologies presented in the book, this is also incredibly unfair. If he took the same tone with even a marginal fundamentalist faction of any of the other discussed religions, there would be an uproar, but after mentioning how hated Atheists are, he joins in the hatred. Mean, bro.

Further, speaking from the perspective of a practicing Buddhist, I'd characterize his treatment of Buddhism to be more "not wrong" than actually completely correct, but it's a daunting task to undertake and not a bad start in general.