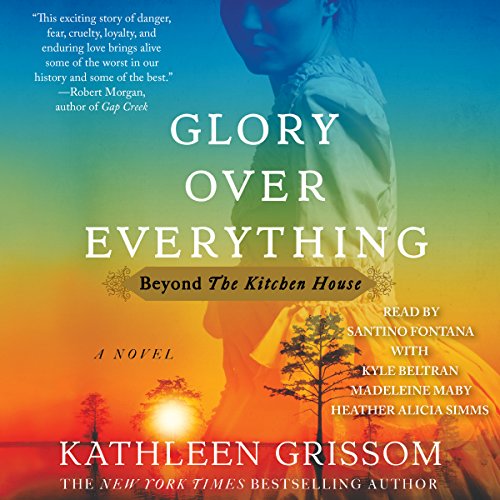 The author of the New York Times best seller and beloved book club favorite The Kitchen House continues the story of Jamie Pyke, son of both a slave and master of Tall Oakes, whose deadly secret compels him to take a treacherous journey through the Underground Railroad.

Published in 2010, The Kitchen House became a grassroots best seller. Fans connected so deeply to the book's characters that the author, Kathleen Grissom, found herself being asked over and over, "What happens next?" The wait is finally over.

This new standalone novel opens in 1830, and Jamie, who fled from the Virginian plantation he once called home, is passing in Philadelphia society as a wealthy white silversmith. After many years of striving, Jamie has achieved acclaim and security, only to discover that his aristocratic lover, Caroline, is pregnant. Before he can reveal his real identity to her, he learns that his beloved servant, Pan, has been captured and sold into slavery in the South. Pan's father, to whom Jamie owes a great debt, pleads for Jamie's help, and Jamie agrees, knowing the journey will take him perilously close to Tall Oakes and the ruthless slave hunter who is still searching for him. Meanwhile Caroline's father learns and exposes Jamie's secret, and Jamie loses his home, his business, and finally Caroline.

Heartbroken and with nothing to lose, Jamie embarks on a trip to a North Carolina plantation where Pan is being held with a former Tall Oakes slave named Sukey, who is intent on getting Pan to the Underground Railroad. Soon the three of them are running through the Great Dismal Swamp, the notoriously deadly hiding place for escaped slaves. Though they have help from those in the Underground Railroad, not all of them will make it out alive.

I loved "The Kitchen House," so I did not hesitate in the least to buy this book. What struck me first was the poor narration. But I really wanted to like this book, to give it a chance, so I continued. But as I continued I noticed that the dialogue was horribly stiff and unnatural, further giving me doubt. I persevered, But our hero was just so boring, and then the plot became more and more juvenile. I took a break. When I came back to it, I couldn't take another word. What a disappointment. Don't waste a credit.

Would you try another book from Kathleen Grissom and/or the narrators?

The kitchen house was a fairly good book. This book was horrible. It's all over the place no storyline. The narrators were dry. Save yourself a credit and buy it from a thrift store.

The same ones from the kitchen house

What character would you cut from Glory over Everything?

Cannot believe this was written by the same author that wrote Kitchen House! Couldn't make myself finish it.

Worth Reading But Kitchen House Is Better

Love historical fiction, and had hoped that this book was just as good as the Kitchen House but sadly, it does not come close! Did not find the characters to have that much depth, and thestory was missing something. Surprisingly, did not feel that the story drew me in, to the point where I was emotionally invested andtherefore,never shed a tear. However, still stuck with the story because thought it would improve. With regard to narration, I was less than impressed, especially with S.F's. performance of James. Yet, S.F. did a terrific job as portraying the character Joe in the book entitled You. Makes me wonder if the narration had been better, would I have enjoyed the book that much more?

A compelling continuation of "The Kitchen House," but it did not leave me with the same feeling of caring and concern that I had for the original characters.The ending is open enough that another sequel can be written.

Kathleen does it again

My heart is s full, so many emotions! It's something I haven't experienced before except with the Kitchen House, I'm feeling the horror, love, fear and so much more..but somewhere underneath that, way down there is even more emotion that I don't have words for. What a journey, I have listened to the Kitchen House twice and know I will do the same with Glory over Everything!! I don't think this has anything to do with the book itself...but I have to say that I love the artwork of both covers! Another awesome surprise was that one of the performers is Santino Fontana, how I love him!!! All the performers are great. There are so many works of literature out there that I cherish...but there are a few that just make me EXHALE at the end!!!! Major kudos to Kathleen Grissom, I will be looking for her future books impatiently!!!!

Sequel is just as great!

Sometimes, writers can stretch a story too far and end up weakening it. When I realized the main character would be Jamie Pyke, I was worried that this would be the case. It's not.

This a great story! I was often upset with Jamie's selfishness, but that was set up well in The Kitchen House, and though he grew (like anyone), he was still himself. Grissom kept this character true. What I love most is how well this full cast interacts and has their own voice.

There is so much more I can say, but most importantly, I really loved this series and highly recommend.

Loved everything about it! A must read (or listen) for everyone. It's a prime example as to why I love historical fiction

If you can get past the narrators voice as well as all of the 'he said, she said', it end up being an enjoyable way to spend time while walking.

Great story. Wish I had read it instead

The narrator Santino was very distracting in his attempt to sound like a female during conversation between Jamie and any female in the story. Even Timing was off. I've never had a narrator stop me from enjoying a book in this way. Very disappointed.

Kitchen house was better in both story and narration.