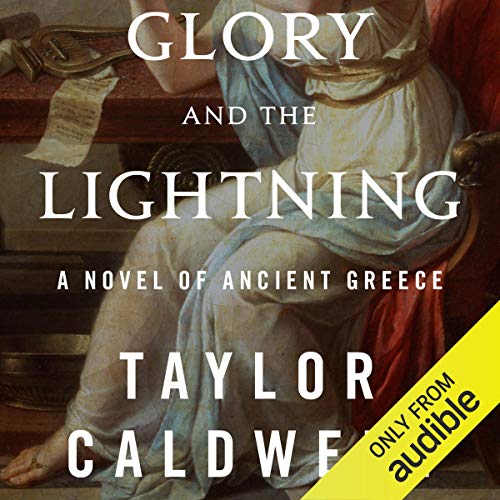 Glory and the Lightning

Glory and the Lightning

A breathtaking saga of ancient Greece and one of history’s most influential political couples, Aspasia and Pericles

Born in the Greek city of Miletus, Aspasia was destined for a life of tragedy. Her wealthy father vowed to abandon any female child, so Aspasia was secreted away, educated independently of her family, and raised as a courtesan. She discovered at an early age how to use her powers of intellect as ingeniously as those of the flesh.

Ensconced in the Persian harems of Al Taliph, she meets the man who will change her fate: Pericles, the formidable political leader, statesman, ruler of Athens, and Aspasia’s most cherished lover. She becomes his trusted confidante, his equal through scandal, war, and revolt.

From the eruption of the Peloponnesian War to violent political and family rivalries to a devastating plague, author Taylor Caldwell plunges the listener into the heart of ancient Athens. In bringing to life the tumultuous love affairs and gripping power struggles of one of history’s most complicated and fascinating women, Glory and the Lightning is thrilling proof that "Caldwell never falters when it comes to storytelling" (Publishers Weekly).

If you know anything about Ancient Greece this is

This is the first book review I've ever written which is a pity because there are so many great books out there. THIS is not one of them. Right from the first it is screamingly homophobic which if you know the first thing about Ancient Greece it would put you off. Also there seems to be some confusion in the authors mind between ancient Persia and maybe the the Ottoman Empire??....I'm not sure and I really don't want to find out but I've read enough real history about the Persian of the time period this is supposedly set in to know that a Satrap.....a governor of a district of the Persian Empire would have no time much less inclination to be what seems mostly to be a merchant. The author also seems to be trying to bend the Aspasia towards a Christian mindset and considering this is several hundred years before the birth of Christ it is jarring and nonsensical. The narrator also seems more fitting to be reading a news cast or a sporting event. If the main character is female maybe choose a female narrator. I'm returning this book before the nausea it induces overcomes me..

Not Sure I liked the Ending

I can't believe I have never read Taylor Caldwell books but I will remedy that over the next six month. The plot is so apropos tp current times. I posted on my Facebook page that you could switch Trump for Pericles and the whole story fits. Just goes to show you that we never learn from our mistakes and history continues to repeat itself. The story is sad in parts but the plot moves along at a steady pace. I am so glad I read the book.