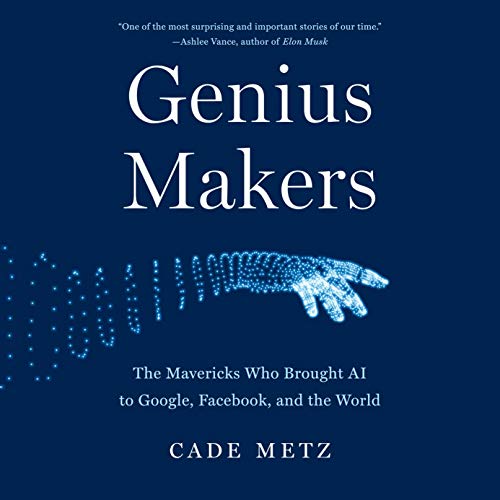 "This colorful page-turner puts artificial intelligence into a human perspective. Through the lives of Geoff Hinton and other major players, Metz explains this transformative technology and makes the quest thrilling." (Walter Isaacson, author of The Code Breaker)

Recipient of starred reviews in both Kirkus and Library Journal

The Untold Tech Story of Our Time

What does it mean to be smart? To be human? What do we really want from life and the intelligence we have, or might create?

With deep and exclusive reporting, across hundreds of interviews, New York Times Silicon Valley journalist Cade Metz brings you into the rooms where these questions are being answered. Where an extraordinarily powerful new artificial intelligence has been built into our biggest companies, our social discourse, and our daily lives, with few of us even noticing.

Long dismissed as a technology of the distant future, artificial intelligence was a project consigned to the fringes of the scientific community. Then two researchers changed everything. One was a 64-year-old computer science professor who didn’t drive and didn’t fly because he could no longer sit down - but still made his way across North America for the moment that would define a new age of technology. The other was a 36-year-old neuroscientist and chess prodigy who laid claim to being the greatest game player of all time before vowing to build a machine that could do anything the human brain could do.

They took two very different paths to that lofty goal, and they disagreed on how quickly it would arrive. But both were soon drawn into the heart of the tech industry. Their ideas drove a new kind of arms race, spanning Google, Microsoft, Facebook, and OpenAI, a new lab founded by Silicon Valley kingpin Elon Musk. But some believed that China would beat them all to the finish line.

Genius Makers dramatically presents the fierce conflict among national interests, shareholder value, the pursuit of scientific knowledge, and the very human concerns about privacy, security, bias, and prejudice. Like a great Victorian novel, this world of eccentric, brilliant, often unimaginably yet suddenly wealthy characters draws you into the most profound moral questions we can ask. And like a great mystery, it presents the story and facts that lead to a core, vital question:

How far will we let it go?

"A ringside seat at what may turn out to be the pivotal episode in human history.... Metz has a breezy style that is easy and fun to read.... Undeniably charming." (Forbes)

"Unlike many of the books written about AI, you don’t need a science or engineering degree to learn from and enjoy this one. Anyone with an enthusiastic curiosity about science, technology and the future of human culture will find this clear-eyed, snappily written book both entertaining and valuable. You could even call it essential for any policymakers, politicians, police, lawyers, judges and decision-makers who will be contending with the social forces unleashed by artificial intelligence. Which, soon, will mean all of them." (The Los Angeles Times)

"[An] engaging new book.... [Metz’s] straightforward writing perfectly translates industry jargon for technologically un-savvy readers (like me) who might be unfamiliar with what it means for a machine to engage in “deep learning” or master tasks through its own experiences." (Christian Science Monitor)

"Carving a narrative out of a complex and ever-changing cast of characters...the book is filled with enlightening anecdotes that add texture and drama to the story. Genius Makers opens with Geoffrey Hinton, the Brit turned Canadian who is widely recognized as having played the most critical role in developing deep learning, the branch of AI that is changing the world today." (Washington Post)

The theme is to explain to non-experts what artificial intelligence is in 2021. Metz tells a stories about the "AI Movement," each chapter a standalone citing notable people and detailing the systems they've been building. Narration is an exemplar of pacing, really moves you forward.

Chapters range in length from 16 to 40 minutes, each a separate narrative. I advise to treat each chapter as a formal lecture. With the partial exception of Geoffrey Hinton, you're not getting much background on any of the geniuses. I didn't feel strong emotion connection to anybody cited so this clearly doesn't fall into the same category as a Michael Lewis book.

I believe we the listening public are waiting for visceral books having to do with AI that'll make us feel goosebumps and even cry. But this is essentially a survey course. Metz makes aspects of AI more accessible and you can take what he says to the bank. If you were looking for a memoir or biography, I think you'd be at peril of wanting your credit back.

Contrary to some of the other reviews, I thought the narration was fine. I found that the contents of the book were extremely interesting and enjoyable!

All story, no technical details

It's a well-told and entertaining history of AI, but not comprehensive or technical in any way.

If you are anything like me, you also prefer books with more meat; but this one will partially satiate that insatiable desire for such rare finds.

The narration was great.

If you love the history and stories of people involving AI, then this is the best book you could read.

It was nice to know a bit more about the history of the characters and their interraltions on academia and industry.

This is a great read for anyone who loves computer science and is curious about AI and its current place in society. It jumps around a bit but overall I couldn't stop listening.

This book is great to understand the story behind AI. But sadly the narrator style didn’t match the narrative and book style. Is so awkward that it was hard to follow the story.

The story is really informative and gives you a good idea of the major players and their background in the AI field. However, the narration is so annoying it makes you want to pull your hair out. The narrator starts every sentence very strong and then trails off the last word, to the point where you can never hear the last word of each sentence. I just couldn't ignore the speech pattern, similar to how you notice every time a person says "um" or "like".

This is an interesting discussion of some of the AI academic leaders, and leading companies especially Google, Deep Mind, Open AI, etc. I liked how the author talked about the BERT open language processing software from Google, the tensor flow processors and graphics chips machines.

The author also describes the excessive bragging and "one- ups-man-ship" of some of the AI competitors. With deep mind co-founder Demis Hasabbis even claiming, in developing an AI company, "it's not for the money." ? This, right before they sold their 10 person company to Google for $500 million.

While the author does a good job of outlining the braggadocios careers of these guys, over several chapters it occurred to me, what do Sam Altman, Mark Zuckerberg, Ilya Sutzkever, Larry Page and Sergei Brin all have in common? They are all jewish computer science entrepreneurs, some immigrants, who at an unbelievably young age, around 26 or 30, become mega-millionaires, some even billionaires, according to the book. Altman is classed as a "dropout" who became a "master" at fund raising, all within the first 2 years of leaving school. While Sutzkever and others are pegged as the prototypical "complete computer scientist genius". However, it is with out question that the young entrepreneurs had help from others within their ethnic group - such as wealthy Jewish billionaires, people who they may be related to, or mega banks such as Goldman Sachs, in obtaining seed money (in a similar fashion that African American basketball millionaires fund black startups, the Chinese fund Asian seed money groups, etc.) They were simply pigeon-holed by them to become super role models and "hero" examples. No doubt there are many, many others with similar skills as these fellows who have tried to raise capital to fund machine learning startups and have been blanked because of no wealthy connections. Still, the book provokes one into more serious discussions of the field and the IT industry in general.

An important story that is not well known.

AI is either going to make us or break us. I’m not so sure people are ready to play God.