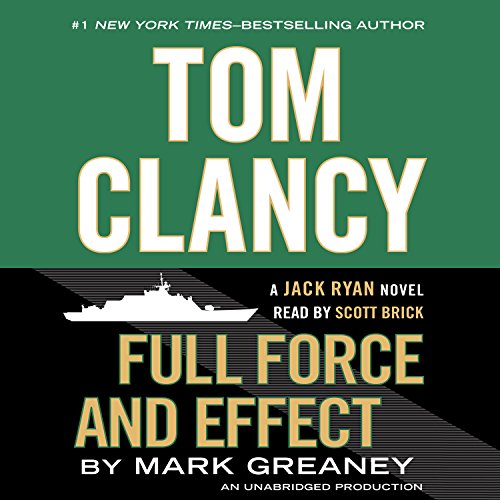 A North Korean ICBM crashes into the Sea of Japan. A veteran CIA officer is murdered in Ho Chi Minh City, and a package of forged documents goes missing. The pieces are there, but assembling the puzzle will cost Jack Ryan, Jr., and his fellow Campus agents precious time. Time they don't have.

The challenge facing President Jack Ryan is an old one with a terrifying new twist. The international stalemate with North Korea continues into its seventh decade. A young, untested dictator is determined to prove his strength by breaking the deadlock. Like his father before him, he hangs his plans on the country's nuclear ambitions. Until now, that program was impeded by a lack of resources. However, there has been a dramatic change in the nation's economic fortune. A rich deposit of valuable minerals have been found in the Hermit Kingdom. Coupled with their nuclear capabilities, the money from this find will make North Korea a dangerous force on the world stage.

There's just one more step needed to complete this perfect plan... the elimination of the president of the United States.

If you could sum up Full Force and Effect in three words, what would they be?

The familiar characters in Tom Clancy's world pull us in every time. Oh sure, its a cloak and dagger thrill ride, but it's the characters and their relationships with one another that keep us wanting more. We actually see that even the bad guys are human beings with motives and stakes of their own instead of being simple antagonist tropes so familiar in modern literature. Some you feel sorry far and others you feel a twisted sense of relief when the finally get what they deserve. The interplay of the plots and numerous subplots keep the story from becoming stale and predictable. Mark Greaney even manages to make the political intrigue aspects of the story well...intriguing and engaging.

I gotta say that Scott Brick did a wonderful job. I've heard his narration on several other books and as always he did a great job of making each character as distinct as possible. However, I've become so accustomed to Lou Diamond Phillips as the go to Tom Clancy narrator that it is really hard for me to adjust to someone else. Again, Scott Brick is awesome, but I wish Lou would reprise his narrator role.

In the shadow of a insane regime, the Campus will face one of its greatest challenges yet both foreign and domestic .

I often discussed Tom Clancy's novels with my uncle who was an avid reader. He passed away nearly ten years ago, but every time I read or listen to the newest Tom Clancy novels it is like he is right there experiencing them with me. He was very critical of literature, but he always found Clancy's novels to be captivating and thought provoking as well as a lot of fun. Thank you Mark Greaney for keeping the franchise alive and providing me with more opportunities to enjoy another good read within the world of Tom Clancy. Tom and Danny would both be proud.

Unfortunately, this audiobook falls on its face due to the poor narration.

Let's get this out of the way up front: Lou Diamond Phillips has been a fantastic narrator of this series for the 4 books preceding this one: Dead or Alive, Locked On, Threat Vector and Command Authority. Through his voice he brought a range and depth to the characters that fully immersed the listener in the storyline. I was really looking forward to another narration from him on this book, but sadly, it was not to be.

Now for the bad news. In my humble opinion, Scott Brick was the wrong choice for this audiobook. His narration is dull, narrow and melancholy. He sounds so sad as he's narrating this book, like his dog just died or something. There's little inflection in his voice, and his cadence is slow and overly drawn out. He puts emphasis on all the wrong words. It was kind of like listening to an inebriated William Shatner.

Scott's accents are terrible, as are his character voices. For example, there was no discernible difference between his impression of Ding Chavez and Mary Pat Foley. There was no change in tone, timbre or intonation between these characters, even when they were having a conversation with one another. The only indication that Scott had switched to voicing another character was by hearing the words "...said Chavez" or "Mary Pat then said...". Come on! Talk about disappointing.

Adding insult to injury, he mispronounced several names as well. For example, who is Gavin "Beerie"?

Contrast this with Lou Diamond Phillips' narrations of these iconic characters. Each voice was unique and instantly recognizable. The listener grew to know and care about their characters by the subtleties of inflection Lou brought. President Ryan sounded presidential. John Clark sounded tough and stoic. Center sounded menacing. Every voice he delivered was unique and perfectly matched to the character in the story. I can't imagine a better narrator for the Jack Ryan series that Lou Diamond Phillips.

Does that make me biased? You bet! But that doesn't mean my review is any less valid.

PLEASE bring back Lou Diamond Phillips for the next book!

If the next audiobook in the Jack Ryan series is not narrated by Lou Diamond Phillips, I'm not buying it!

The Narration did not suit.

What disappointed you about Full Force and Effect?

I hated the narration. You can listen to the sample but the dialogue may not be as troublesome as action scenes. The cadence never changes for action scenes or dialogue. I bought this pre-release, and i never imagined that such a popular series would have a poorly suited narrator (yes that is my opinion. Your opinion may differ.) I listen at 1.25 speed but i still hear those over dramatic pauses and downbeats at the end of each sentence.

Greaney isn't as good about developing characters, or getting you to believe in the science of the weapons as Clancy was, but he sure writes action well. Things move so fast that i dont question the contrived good luck and miraculous timing. While not the same as Clancy i can enjoy listening to the action.

I will never get a book from Scott Brick again. I can do without different voices for each character, but the reading has much more to dislike. I think he would do well at soap operas or romantic novels, where the listener wants the narrator to add drama in an other wise boring book. But his cadence over emphasizes every period as being meaningfull and significant.

Isn't there some editor that makes narrators audition for parts? This book was ruined for me by the reader, and i hate to think a real editor would have actually selected Scott Brick as appropriate for this book. Maybe Greany should give his opinions on possible readers ( and listen to more than a sentence before approving a narrator.)

If you like Jack Ryan, keep going with this one.

This series is so popular the only reason for reviewing this installment is to assure you its worthy of your time.

always makes the listener love it.
the whole series has been a complete treat from first to last sentence.

Glad the characters are still around

I really hesitated in writing this review. First of all, I am THRILLED that Mark Greaney is continuing the late great Tom Clancy's storytelling and I ALMOST gave the story a five star. Almost. I have been reading these stories for decades and, although I know the last few were co-written, I have remained loyal to the series. Mr. Greaney did a wonderful job as far as he went.

My critique of Scott Brick is not new. I realize he is everyone's favorite narrator. He is not mine. I would have preferred that Lou Diamond Phillips remain my storyteller. Scott Brick's voice irritates me -- not AS much in this book as in some others. However, I have never listened to someone who is more in love with his own voice. Every word is drawn out and too emotional. I think three stars is probably the highest rating I have given to Mr. Brick in quite some time so that's actually a positive rating from me.

My SOLE critique of this novel is the virtual lack of existence of Cathy Ryan and the other Ryan kids. I realize that, several years ago, a decision was made to follow Jack Junior's escapades (and I love Jack Jr. !!). I was hopeful that with quite a bit of focus back onto President Jack Ryan, that more attention would come back to Dr. Cathy and the other kids. Maybe in the next book, the whole Ryan family can be better represented. It's the all-American family who become major political figures that truly made the Jack Ryan series so wonderful. I can (and do) read hundreds of thrillers, but there is something about THIS First Family that makes me want to know all the details of their lives. My favorite book to date is still "Executive Orders" because it explores the relationships and isn't just about the thriller/action portion.

Other than those very minor comments, "Full Force and Effect" is spectacular. I wouldn't change anything about the story -- not a single detail -- I would just have added a little more. I love the story and the premise and the characters. I love the "ripped from the headlines" feeling with North Korea acting like the criminals that they are and the subtext of Russia getting frisky. I love that President Ryan was again a player in this story. It's a great novel. Both my overall rating and story rating are actually 4.5 stars.

If you could sum up Full Force and Effect in three words, what would they be?

What other book might you compare Full Force and Effect to and why?

All of the campus novels are great books.

Would you be willing to try another one of Scott Brick’s performances?

Absolutely not. Scott Brick almost made it impossible to finish this book. If I were to summarize his performance in two words it would be "over dramatization"

The only reaction I come away with is despair over the fact that Scott Brick seems to read 50% of all the books in this genre.

I love this series especially the books by Greaney. I just wish Lou Diamond Phillips would take back his rightful place as narrator.

Jack Ryan written by Mark Greaney and narrated by Scott Brick: it does not get better!

Tom Clancy's death is sad, but Mark Greaney is a more talented writer. The Jack Ryan franchise lives on with no loss in quality.

Scott Brick's narration is flawless, as always. There are none better.

If you liked any or all of the prior Jack Ryan novels, you will love this one.

Can't get enough of Jack Ryan

This book is a long one. However, that is one of the things that I liked about it. It did not rush through the different ups and downs, or ins and outs of each scene. You were brought along the adventures and given a front row seat. Well worth the time and credit.