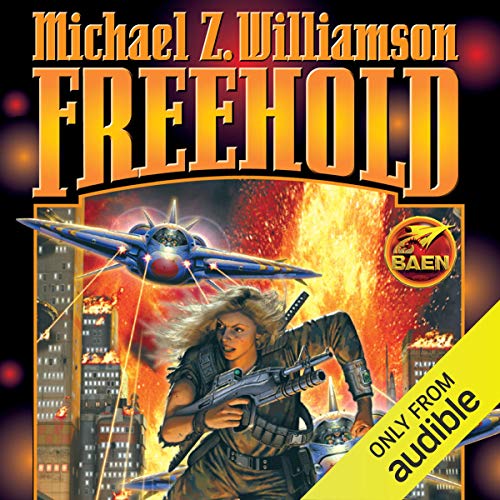 Sergeant Kendra Pacelli is innocent, but that doesn't matter to the repressive government pursuing her. Mistakes might be made, but they are never acknowledged, especially when billions of embezzled dollars earned from illegal weapons sales are at stake. But where does one run when all Earth and most settled planets are under the aegis of one government? Answer: The Freehold of Grainne. There, one may seek asylum and build a new life in a society that doesn't track its residents every move, which is just what Pacelli has done. But now things are about to go royally to hell. Because Earth's government has found out where she is, and they want her back. Or dead.

the first half of the booked had too much sex and basic day to day for my tastes. Way too involved in detailing their daily lives and sexual activities. felt like science fiction for bored hoisewives. howevee, the later parts of the books were very good, mode war and combat oriented, although sex repeatedly rears it's head throughout. Not badly, just too much for my tastes. All in all, very good read, well written. just depends on what you are looking for.

This was overtly political, which usually turns me off. However, I found the open and intelligent portrayal to be so persuasive on both an economical and a moral basis, that my own viewpoint must forever be altered. I felt as though the essence of Heinlien was animating the story. The book has brought forth much thought as it challenged me to remember myself. Very pursuasive with strong emtional triggers!

Heinlein with a hammer

This book was entertaining, especially the battle and fight scenes. The performance was well done. Now, the complaints: I'm not a prude, but the continual, over the top sex scenes were an annoyance...I get it, this place is more libertine than earth, but I kept wondering if I'd accidentally downloaded a bodice ripper romance novel. Also, while I agree with the political philosophy of this book, even I found it a little heavy handed, at times. Heinlein did it better and with more subtlety in Starship Troopers.

More than latent racism in a libertarian fantasy

I'm guessing the author would be difficult to talk politics with... I'm also guessing his political sensibilities are on full display here with no effort at subtlety. Fantastical and unrealistic but isn't that why we love science fiction? What is most off-putting is the hard to overlook racism.. Britishy (read: White) freedom-loving 'Freeholders' vs the Rape-y , vulgar UN troops with an urban idiom (read: Black)

Williamson is not a bad Sci-Fi author , but it seems like his personal biases took the fore in this book and the result is not great.

I was hoping for Military Sci-Fi, not 50 Shades.

Another book by this same author is one of my favorites ("A Long Time Until Now"). I was excited to enjoy a long series by the same author, unfortunately there was far more explicit sex than I care for.

If you enjoy L. Neil Smith

I wanted to keep listening, finding excuses to do more chores

It reminded a lot of Pallas, similar idea with character suddenly freed from a repressive society that says they are free but is actually very fascist and severely limits rights causing it to be very uncivilized in actuality; the main character is very shocked but eventually sees how civilized and better freedom actually is.

A little preachy for the libertarian cause

decent characters and plot. could have used some trimming. Her Libertarian perfect paradise was too perfect and I found myself unable to suspend belief, I kept thinking "that would never work".

What struck me was the relevance this science fiction book has to what is happening in the world today. I picked up on many things throughout the book but it hit me between the eyes when I got to chapter 21. After that, I was looking for all the similarities of human behavior today [actually through time] and what was happening between the two worlds.

The world building was awesome. I loved the spin the author put on the society of Freehold of Grainne in comparison to Earth.

I was highly entertained and can't wait to get to the next book in the series. Whispersync's $1.99 deal & free Kindle book once again has put me onto a series I wouldn't normally choose and have thoroughly enjoyed. Oh the hours of enjoyment and yet the credits I will be spending....

A fun addition to the Conserve-a-porn genre

Freehold is a fun addition to the niche Conserve-a-porn sub-genre. For those unfamiliar, Conserve-a-porn is sci-fi stories where the heroes use libertarian, conservative values to overcome alien and/or liberal overlords, usually while engaging in a great deal of sex. "Liberlas" are universally presented as cartoonishly stupid. To those who this growing sub-genre might appeal are suggested to explore the works of John Ringo, the master of the art.

You don't necessarily need to be conservative to enjoy conserve-a-porn, although I imagine it helps. If your poilitcal leanings lie elsewhere the book presents an interesting perspective into the conservative mindset, and to that extent is socially relevant.

Politics aside, Freehold is rather well written. If the the feasibility of the Libertarian Utopia requires some suspension of disbelief and refusal to apply common sense I would point out that this is science-fiction, and that you the listener have already signed on to do that.

Once you accept the premise of the story the characters are interesting and the evil liberals buffoonish enough that their inevitable demise is enjoyable. The narration by Molly Elston is truly excellent, and clocking in at 21 hours its not a bad use of a credit, especially if you listen to audiobooks as part of a long commute.

I've read this book before, but the reader really added a new dimension to it.