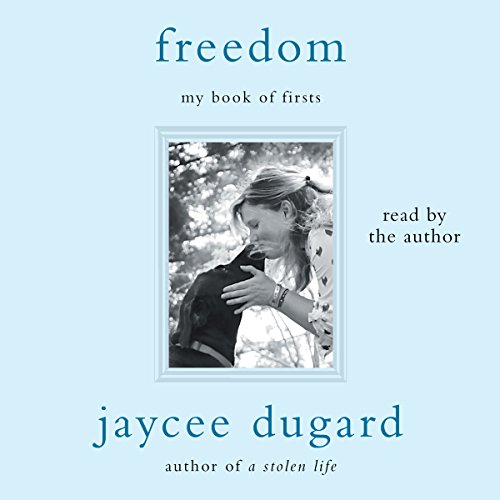 In the follow-up to her number-one best-selling memoir, A Stolen Life, Jaycee Dugard tells the story of her first experiences after years in captivity: the joys that accompanied her newfound freedom and the challenges of adjusting to life on her own.

When Jaycee Dugard was 11 years old, she was abducted from a school bus stop within sight of her home in South Lake Tahoe, California. She was missing for more than 18 years, held captive by Philip and Nancy Garrido, and gave birth to two daughters during her imprisonment.

A Stolen Life, which sold nearly two million copies, told the story of Jaycee's life from her abduction in 1991 through her reappearance in 2009. Freedom: My Book of Firsts is about everything that happened next.

"How do you rebuild a life?" Jaycee asks.

This raw and inspiring book will remind listeners that there is, as Jaycee writes, "life after something tragic happens.... Somehow, I still believe that we each hold the key to our own happiness, and you have to grab it where you can in whatever form it might take."

Started out boring and didn't get past the fifth chapter, Her first book was great but this one didn't hold my interest.

Only for real Jaycee fans, no juicy details here

I have always found the story of Jaycee Dugard fascinating, and as soon as I heard that she had written this I wanted to read it. I wanted to hear all about the adjustment to freedom and all the juicy details those dramatic changes must have involved. I did not however find those things here. I enjoyed listening to her book and I am not bothered by her narration. She still sounds like a little girl reading, especially at the beginning. She does tell stories of some of her therapy (and she seems amazingly well adjusted) and she tells of flying alone on a plane, doing her first horse show, going on vacation to Ireland, working in a remote village with a church group etc. She has certainly done more interesting things than I have, but I would have been even more interested in hearing about her daughters adjustment to the new family structure and a free life. She does not however say anything but the vaguest things about her unnamed daughters. I totally understand this - she is leaving it as their story to tell not hers - but still I felt disappointed not to get more info on that.

This book was wonderful. She shares what it was like for her, her daughters and mother. Learning to trust again and learning to love the goodness after such pain. Thank you for allowing us to love you, Jaycee. I wish you love and happiness and I thank you for your honesty. Your book made me cry, smile, laugh and appreciate my life and freedom. :)

I realize that this is not a fictional book and Jaycee is not a trained writer but I was expecting more in this book. it was a little like reading a child's dairy. No disrespect intended at all and I don't claim to understand what she went through because I don't but for some reason I felt something was missing. I'm sure my critique won't hurt her feelings though...she's a tough girl....and an inspiration.

One of those books its hard to finish.

Lack luster. It should of been titled a journal. I was hoping to a follow up to how her daughters and herself are doing without the cringe worthy ten year old voice.

Not at all what I thought it was going to be. It sounds like a seven-year-old is reading the book. Very boring.

not what I expected. she sounds like a little gir

I could not finish , did not like. would not recommend to friends or family.

one amazing young lady. stories of happiness and sadness. finding joy in everything she does

Thank you Jaycee for surviving!

Awesome continuance, I hope you continue to inspire. I am looking forward to your next writing, I know you love to write.

just a rehashing of her previous book. same stuff said over and over. I bought the book more to support her than for an ongoing interest.