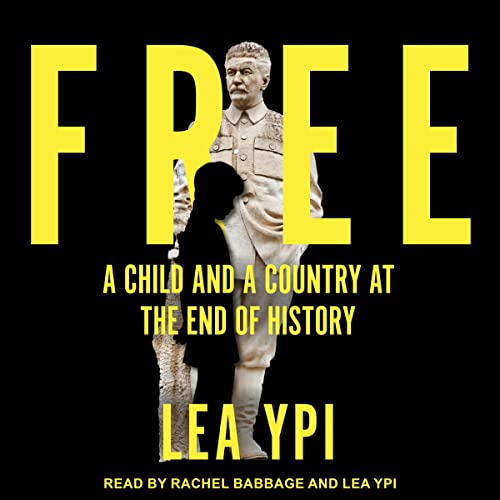 Longlisted for the 2021 Baillie Gifford Prize for Non-Fiction

A reflection on "freedom" in a dramatic, beautifully written memoir of the end of Communism in the Balkans.

Lea Ypi grew up in the last Stalinist country in Europe: Albania, a place of queuing and scarcity, of political executions and secret police. While family members disappeared to what she was told were "universities" from which few "graduated," she swore loyalty to the Party. In her eyes, people were equal, neighbors helped each other, and children were expected to build a better world.

Then the statues of Stalin and Hoxha were toppled. Almost overnight, people could vote and worship freely, and invest in hopes of striking it rich. But factories shut, jobs disappeared, and thousands fled to Italy, only to be sent back. Pyramid schemes bankrupted the country, leading to violence. One generation's dreams became another's disillusionment. As her own family's secrets were revealed, Ypi found herself questioning what "freedom" really means. With acute insight and wit, Ypi traces the perils of ideology, and what people need to flourish.

This is a gripping, “page-turning” drama of intrigue and mystery, doubling as a subtle work is social history and political philosophy, all told through the sly observations of an 11-year-old girl trying to make sense of the topsy-turvy world outside the small flat she shares with 3 generations of her Albanian family. Exquisitely written by the woman who would grow up to become the youngest-ever professor of philosophy at the London School of Economics, and engagingly performed by the narrator. (Works well at x1.3 — you’ll be too impatient to hear what happens next at any slower speed!)

A Book About People, Not Ideology

I first encountered Albania as a teenager, listening to the over-the- top ultra Communist propaganda blasted my way by the 500kw transmitters of Radio Tirana. It was kind of a joke, hearing about tractor production goals met and constant bashing of "US imperialists and Soviet Socialist/imperialists." I wanted to learn about how people actually lived in that mysterious land, but it was as opaque as a brick wall. Radio Tirana wouldn't even respond to my letters.
But then, the regime fell, Radio Tirana was gone, and Albania faded from my consciousness. US media had no interest in it, and the BBC only covered the most tragic events, which seemed a piece of the horrors taking place in Bosnia, Kosova, etc.
This book, by a philosopher, provides the insight into the humans of Albania in that era in a way that is not ideological, but insightful and often funny, albeit sardonically. As the author states in her epilog, philosophy is empty without the stories of the people it affects. Ypi tells those stories in a captivating manner. The reader's use of accents is spot on and helps to convey the Albanian sense of irony.
I highly recommend this Audiobook.

great as both a story and a time capsule

This book is incredible. If you're interested in cold war history and open to political conversation from a wide amount of angles, it's a book for you. Its a story of a past society united both in faith and fear of the party that led it, and that society crumbling as the vacuum left by the party was filled by a weak central authority and blatant opportunists in post-communist Albania. And the story told is through the eyes of a formerly-enthusiastic participant in the old society, from age 11 watching that society change into the far more divided and confused Albania that -it can be argued- still is today.

Beyond the larger-scale politics, the book covers Lea Ypi's family life: a family frequently engaging in small-scale political debates about the changing political landscape. She learns that she came from a family who's properties were expropriated during the revolution and the resentment of her mother lingered throughout her life and would become a platform for which her mother would launch a political campaign in the emerging centre-right party post-1992. Meanwhile on the other side of the family, her father at one point truly believed in the possibilities of revolutionary warfare to change societies and thus lived in (somewhat) quiet disagreement with his wife's politics.

The book is a fantastically in-depth look into political discourse as a whole, from the wide array of examples shown of these political ideas in practice: from the transition of communism to liberalism, and then into tragic civil war. Highly reccommend this book.

Captivating memoir & I learned a lot

Knowing nothing about Albania, yet intrigued at learning of a personal story of place and generations, I waded in. The reading and story I found captivating. The context and time in history relevant not only as history but to our present day issues of displacement, economic theory in practice, culture, family. I appreciate the authors views on socialism and at the end the specificity of actual experience as contrasted to the imagining of what it would be like. Thank you

Gently amusing, eye-opening, and deeply moving. A story of a girl’s early years that’s also a history of Albania’s transition from one quasi-religion to another, from communism of a unique kind - claustrophobic in a way all too apparent to the listener, but lost on the little girl who knows no different - to catastrophic neoliberalism, the gospel of the market that surrendered the nation to criminal gangs, leading to civil war. And throughout, tender, observant portraits of her parents and grandmother, deepened by revelations of family history. A very, very good book.

I enjoyed this book. Given the rising inequality in the world today, this book addressed the socialism and even capitalism in a way I hadn't heard before. Highly recommend!

Moving and humorous account of the final years of the one-party Socialist regime of Albania, and of the first years of democracy. Narrator: really good.

Educational, interesting, thought provoking. Hard to put down and left me wanting to know more.

This book is speaking about the challenges of our times as much as it describes the challenges of past times. A child growing in between two systems/ideologies and the consequences of each. There is no freedom in either, just the forms it manifested was different. Loved the peculiar way that each character represents a set of ideas and failures. It's a book describing the disappointment of a system that promised The freedom that never realized. That freedom that lead to war...