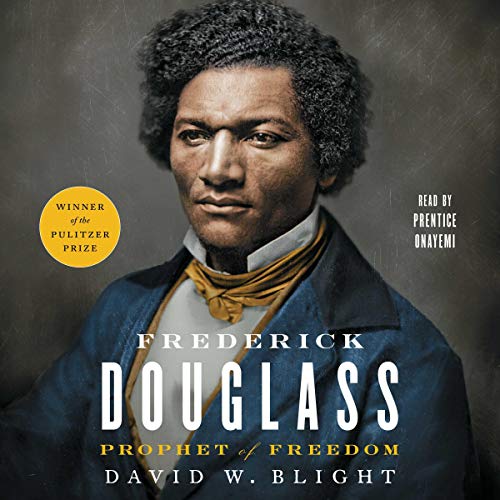 The definitive, dramatic biography of the most important African American of the 19th century: Frederick Douglass, the escaped slave who became the greatest orator of his day and one of the leading abolitionists and writers of the era.

As a young man, Frederick Douglass (1818-1895) escaped from slavery in Baltimore, Maryland. He was fortunate to have been taught to read by his slave owner mistress, and he would go on to become one of the major literary figures of his time. He wrote three versions of his autobiography over the course of his lifetime and published his own newspaper. His very existence gave the lie to slave owners: with dignity and great intelligence, he bore witness to the brutality of slavery.

Initially mentored by William Lloyd Garrison, Douglass spoke widely, often to large crowds, using his own story to condemn slavery. He broke with Garrison to become a political abolitionist, a Republican, and eventually a Lincoln supporter. By the Civil War and during Reconstruction, Douglass became the most famed and widely traveled orator in the nation. He denounced the premature end of Reconstruction and the emerging Jim Crow era. In his unique and eloquent voice, written and spoken, Douglass was a fierce critic of the US as well as a radical patriot. He sometimes argued politically with younger African Americans, but he never forsook either the Republican party or the cause of Black civil and political rights.

In this remarkable biography, David Blight has drawn on new information held in a private collection that few other historian have consulted, as well as recently discovered issues of Douglass’ newspapers. Blight tells the fascinating story of Douglass’ two marriages and his complex extended family. Douglass was not only an astonishing man of words, but a thinker steeped in Biblical story and theology. There has not been a major biography of Douglass in a quarter century. David Blight’s Frederick Douglass affords this important American the distinguished biography he deserves.

The sound of rollerskating in sand

It got a real good review in the Wall Street Journal so I bought it. Now I can only listen to about 15 or 20 minutes at a time. This reader sounds like James Earl Jones on qualudes.

I am still really interested in this biography but - DUDE!!! - speed up the delivery. Not EVERY sentence is sententious.

Given the importance of the topic, the size of the book, and the prestige of the publisher, Audible could have gotten Samuel L. Jackson or Wesley Snipes or who ever. Someone to give it some LIFE!

I have not previously read any biographies of Frederick Douglass. I was aware of him from other history books or biographies. But this is an excellent biography.

I was aware of David Blight from the podcast of one of his Yale history courses but I have not read another one of his books. This was very well written and well researched. I am looking forward to reading it again in a couple years after I read some of Douglass' autobiographies directly.

Douglass is a fascinating figure.

A well written, detailed, and informative biography of Frederick Douglass. Prentice Onayemi's narration is tedious. He has a soft, soothing voice, but was overly "dramatic" in his reading. Perhaps he didn't realize that the words themselves were dramatic. He often ended sentences in a whisper which were unintelligible unless the sound level was high, which made it too loud in other places. The presentation is plodding, slow, and disappointing. Playing the book at 1.25 speed helped and made it a worthwhile listen.

The Best of Everything Audible

Let’s face it, some history doesn’t fit the audio format well. FD’s story is tailor made for it. When told by a great author like Mr. Blight and so wonderfully narrated, the combination is sublime.

The content of this book presents unparalleled insights into a character of unappreciated historical importance. However, the listen is laboriously ponderous. The reader attempts to impart profound importance to every sentence by overemphasizing each word with unduly prolonged spacing, reminiscent of those who seek the same effect by placing a Period. After. Every. Word. This book would have been much more enjoyable, and a much shorter listen, had the performer read at a normal pace.

WHAT YOU DO NOT KNOW

David Blight offers a nuanced biography of Fredrick Douglass, a great 19th century American leader. Blight shows Douglass to rival the intelligence and charisma of the best known 20th and 21st century black Americans. Like Malcolm Little (aka Malcolm X), Martin Luther King, and Barrack Obama, Douglass faces down poverty and demonstrates the equality of all human beings. Malcolm Little, King, and Obama never face the lash of slavery, but Blight shows how Douglass pushes aside physical and cultural cruelty to demand freedom and equality of all.

Though shown to begin in peace, Blight shows how Douglass grows to understand peace will not only come from words alone but must come from action. Douglass came to revere the anti-slavery violence of John Brown. John Brown is neither lionized or vindicated by Blight but is shown as a turning point; a turning from moral suasion to action by people of color against slavery. Courageously, Douglass attacks the institution of slavery before, during, and after the American Civil War. Douglass becomes the conscience of white and black America.

Blight shows Douglass, like all human beings, is imperfect. He has blind spots when speaking of freedom and equality. Douglass discounts American decimation of native Americans and denial of womens rights by arguing neither compares to slavery, subjugation, and murder of blacks.

The laws of human nature require equal treatment of all. That is the essence of what Blight is writing about in the life of Frederick Douglass.

David Blight's masterful biography of an icon of the American struggle against slavery is all but ruined by stilted narration. Onayemi seems to believe that he can lend gravitas to Blight's words by delivering them in a hyper-staccato cadence with a sing-song pitch. Gravitas.....not. Annoying......extremely.

I've put off reviewing this because I feel like I want to find the right quote, the perfect words, the right path to unpacking my thoughts about this piece. It was a lot to digest. My main information about Douglass comes from his popular Narrative of the Life of Frederick Douglass. This book expands on all of Douglass' narratives and serves as both a biography of Douglass and a BLACK history of his time, but also as an analysis of those autobiographies. There are multiple themes Blight is working on in this book and he nails almost all of them. I walked away from this biography fed, nourished, and given a better perspective of Douglass the man AND Douglass the myth. I feel like both the REAL man was expanded by the biography (I loved the last years of Douglass' biography just as much as the action-packed first years) as much as his myth and reputation. I especially loved the careful analysis of the Lincoln/Douglass relationship and the chapters that dealt with Douglass' relationship with the early suffragists. Nervous isn't the right word, but I was a bit hesitant to read the chapters about Blight and his wives/women and children. What major figure can be SO BIG and also have all their family shit together? But the frailties of his family and the way Blight paints his relationship with women seems to plant him firmly in the earth and in his time. He wasn't abstract. He was a man. But GOD, imagine living under THAT man's shadow.

Gotta Love this Reader and the Story of Frederick Douglass. I could mot put it down, falling asleep a few times and rewinding to the last page I could remember. I will surely keep this top of list to read every now and then. Amen.