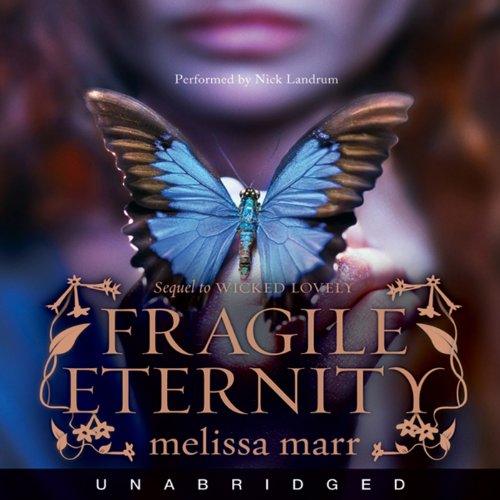 Aislinn is the new faerie Summer Queen, but she loves the mortal human Seth. Since all of faerie is on the brink of a cataclysmic war, the Summer Queen's infatuation is distracting her and endangering her subjects, not to mention the entire world. Narrator Nick Landrum uses a gentle, whispery voice, and he reads at a leisurely yet deliberate pace. His delivery suits the story, which does not have much action; instead, characters spend a great deal of time intensely conversing. Landrum's lack of vocal variation makes it occasionally difficult to tell which character is speaking. But if listeners enjoy the romance and intrigue, they'll gladly do what it takes to sort out the characters.

Seth never expected he would want to settle down with anyone - but that was before Aislinn. She is everything he'd ever dreamed of, and he wants to be with her forever. Forever takes on new meaning, though, when your girlfriend is an immortal faery queen.

Aislinn never expected to rule the very creatures who'd always terrified her - but that was before Keenan. He stole her mortality to make her a monarch, and now she faces challenges and enticements beyond any she'd ever imagined.

In Melissa Marr's third mesmerizing tale of Faerie, Seth and Aislinn struggle to stay true to themselves and each other in a milieu of shadowy rules and shifting allegiances, where old friends become new enemies and one wrong move could plunge the Earth into chaos.

Could have been so much better

I personally loved the book Wicked Lovely, and I didn't hate Ink Exchange(though it was rather slow). I bought Fragile Eternity expecting the return of Aslinn to be entertaining, or at least a book that would bring the series forward. All I read was the constant complaining Aslinn who cries for months and a Seth who is weak and tempermental and who seems so uncaring while in Farier, even once he learned the difference in time he still expected her to understand without asking anyone to ask her to just wait for him and he will explain when his time is done..but no..he says nothing, even knowing she has to be hurting. Unfortunately it doesn't even keep the series going, except creating more problems and burning more bridges. Every moment with the high queen who becomes a mother made me feel like the book couldn't end fast enough, they drove me crazy, Seth just seemed to change so much of who he was/is.

reader is slow, monotonous- or maybe its the book?

I have listened to the first 2 books in the series mostly enjoying both of them. The narrators could have both been better, but the plot kept me listening to them. I liked the reader much better when he read the last book.

That leads me to believe it is merely the book that is bad. I have had it in my library for the last 2 months and have only been able to stand about half of it. Every time I start it up again I think "Oh yeah, now I remember why I turned this off!"

Halfway through the book it still appears to be going in no particular direction, it is slow, and they keep revisiting characters I have had no interest in learning more about from the first 2 books.

I had to write a review for this to spare others the regret. Even if you enjoyed the first two books like I did you will probably find this one a lost cause.

I absolutely love these books. I'm so looking forward to the next book. 3 down 2 to go.

I adore this story line and LOVE the Author.... I would most definitely recommend this series to anyone who likes gritty mythological characters that are seeded in the true legends of these creatures. . not the fluffy sparkle fairytale's of the present

Seth lost his morals he completely changed who he was he lost his sense of right and wrong which is kind of ironic seeing how he is now of the high court and should have more morals. he doesn't care about anything and is not the boy I fell in love with in wicked lovely. I would change seth and make him be who he actually is instead of some wimp obsessed with staying with his girl who doesn't react when he finds out that he was mislead by the high queen.

Would you be willing to try another book from Melissa Marr? Why or why not?

yes I've come this far I have to finish the series. I hope the next book is better.

I didn't like the switch from the girl narrator to nick for the second but overall nick isnt bad but I liked the girl better.

Best of both worlds, indeed

Would you try another book from Melissa Marr and/or Nick Landrum?

Yes, and I have. I miss the female narrator from the first story.

If you’ve listened to books by Melissa Marr before, how does this one compare?

About the same. At least I sort of cared about Seth.

What does Nick Landrum bring to the story that you wouldn’t experience if you just read the book?

I keep saying this: pronunciations.

Did Fragile Eternity inspire you to do anything?

Nah. Just to get it over with already.

Everybody wins and it's annoying.

What did you love best about Fragile Eternity?

I enjoyed learning more about other characters from the previous books.

What was one of the most memorable moments of Fragile Eternity?

The entire book was memorable.

What does Nick Landrum bring to the story that you wouldn’t experience if you just read the book?

He did a good job, but I still would prefer the 1st books narrator.

This 3rd book was kind of a building block for the next 2 books.

The author had trouble keeping it up to par with the first 2 books.

This book is just primarily a filler.

But it didn't really disappoint me and I enjoyed it.

Would you listen to Fragile Eternity again? Why?

This was an OK book kinda slow.. It was better than the previous one though.

Which character – as performed by Nick Landrum – was your favorite?

Excellent third in a series. This book is building the suspense in the story so that you are looking forward to the next one and can't wait. It continues the story from the first two in a way that you kind of come up with your own scenarios which as you read on you find that you were wrong but you keep on doing it any way yet you cant stop reading and when you get to the end you do not expect it, you want more.

I enjoyed listening to Wicked Lovely. I thought it had a good storyline and stuck to it. When I started Fragile Eternity I felt as if I had missed two books in this series. A lot happened in between the first and second book but the reader doesn't get a summary or flashback to catch them up. New characters get roughly introduced and the plot doesnt become apparent until halfway through the book. Not the best sequel. Oh yea, the narrator is now a guy? That threw me too. It would be alright with me if he actally tried to make the characters sound different. Alas, everyone sounds alike which makes this book even harder to follow.