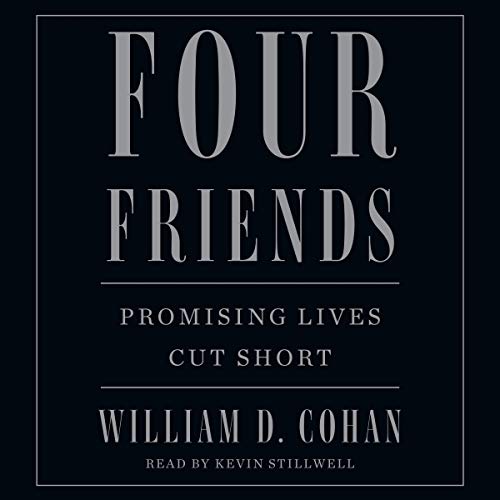 In his masterful pieces for Vanity Fair and in his best-selling books, William D. Cohan has proven to be one of the most meticulous and intrepid journalists covering the world of Wall Street and high finance. In his utterly original new audiobook, Four Friends, he brings all of his brilliant reportorial skills to a subject much closer to home: four friends of his who died young. All four attended Andover, the most elite of American boarding schools, before spinning out into very different orbits. Indelibly, using copious interviews from wives, girlfriends, colleagues, and friends, Cohan brings these men to life. Jack Berman, the child of impoverished Holocaust survivors, uses his unlikely Andover pedigree to achieve the American dream, only to be cut down in an unimaginable act of violence. Will Daniel, Harry Truman’s grandson and the son of the managing editor of The New York Times, does everything possible to escape the burdens of a family legacy he’s ultimately trapped by. Harry Bull builds the life of a careful, successful Chicago lawyer and heir to his family’s fortune...before taking an inexplicable and devastating risk on a beautiful summer day. And the life and death of John F. Kennedy, Jr. - a story we think we know - is told here with surprising new details that cast it in an entirely different light.

Four Friends is an immersive, wide-ranging, tragic, and ultimately inspiring account of promising lives cut short, written with compassion, honesty, and insight. It not only captures the fragility of life but also its poignant, magisterial, and pivotal moments.

“William Cohan has written a beautiful and heartbreaking book about friendship and privilege, in a corner of American life that suddenly feels very far away.” (Malcolm Gladwell, New York Times bestselling author of The Tipping Point and Blink)

“Four Friends is a tender, bracing meditation on ends and beginnings, large dreams and larger misfortunes, outsized promise and unfathomable loss. It is also an indelible portrait of a time and place, at once masterfully researched and deeply personal.” (Stacy Schiff, Pultizer Prize-winning author of A Great Improvisation)

“Deeply moving, Four Friends explores the idea of fate and shattered promise with intelligence and heart. It will haunt you and make you think.” (Susan Orlean, New York Times best-selling author of The Library Book)

I love the way this author tells a story. So beautifully and intimately told in a manner that honors each without sugar coating their flaws.The narrator was terrific. I forgot that the author was not narrating. More please!!

It shows how life stories of so many individual people,well-known and unknown, can be presented and appreciated. In any group of friends, each has his or her own qualities and experiences of love, family, career, accomplishment, tragedy, failure, compromise... and this author has captured 4 lives touching on all these.
I like the boarding school framework as I had a great experience at a peer school but had a grandfather, father and brother, all Andover men. I knew stories of many of their schoolmates: my grandfather’s lifelong friends, business associates and neighbors going back to Andover and Yale in the 1880’s! My father’s 60 freshman classmates at Yale from Andover and his long friendship with the 41st President, were legends I learned. Most moving were the occasions I visited Andover and Yale with him and, through tears, he pointed out the names of his many friends killed in the war. I wish he or his contemporaries had been able to capture their brief lives equally as well as Cohan has.

Over time we all lose old friends from that phase and one wishes more fine biographies of this depth could be created for many!

It was a wonderful book. I loved it. How sad to have lost 4 friends so tragically. But what a great tribute.

This book is staying with me days after. Incredible stories of lives cut too short. The incredible way they lost their lives, and the families left behind 🙏🏽