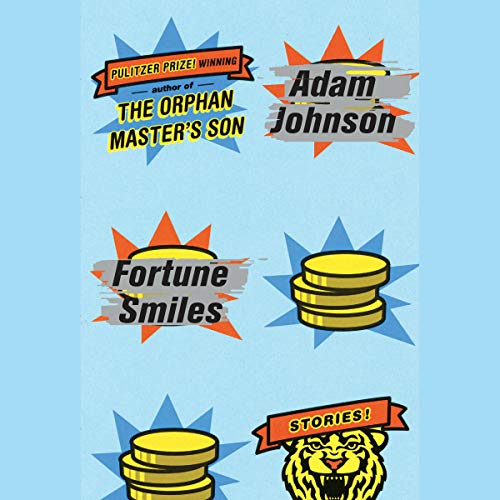 Winner of the Pulitzer Prize for his acclaimed novel about North Korea, The Orphan Master's Son, Adam Johnson is one of America's most provocative and powerful authors. Critics have compared him to Kurt Vonnegut, David Mitchell, and George Saunders, but Johnson's new book will only further his reputation as one of our most original writers. Subtly surreal, darkly comic, both hilarious and heartbreaking, Fortune Smiles is a major collection of stories that gives voice to the perspectives we don't often hear while offering something rare in fiction: a new way of looking at the world.

In six masterful stories, Johnson delves deep into love and loss, natural disasters, the influence of technology, and how the political shapes the personal. "Nirvana", which won the prestigious Sunday Times short story prize, portrays a programmer, whose wife has a rare disease, finding solace in a digital simulacrum of the president of the United States. In "Hurricanes Anonymous" - first included in the Best American Short Stories anthology - a young man searches for the mother of his son in a Louisiana devastated by Hurricanes Katrina and Rita. "George Orwell Was a Friend of Mine" follows a former warden of a Stasi prison in East Germany who vehemently denies his past, even as pieces of it are delivered in packages to his door. And in the unforgettable title story, Johnson returns to his signature subject, North Korea, depicting two defectors from Pyongyang who are trying to adapt to their new lives in Seoul, while one cannot forget the woman he left behind.

Unnerving, riveting, and written with a timeless quality, these stories confirm Johnson as one of America's greatest writers and an indispensable guide to our new century.

"How do you follow a Pulitzer Prize-winning novel? For Johnson, the answer is a story collection, and the tales are hefty and memorable...." ( Publishers Weekly starred review)
"Tragedy is always close to the surface in Johnson's work - with tragicomic layerings.... Bittersweet, elegant, full of hard-won wisdom: this is no ordinary book, either." ( Kirkus Reviews starred review)

Half Full or Half Empty


How can you explain why something resonated in you and bounced off someone else? Just look at the two reviews that appear here for this book right now, 5:30 p.m. MST 10/28/15 "Darwin" and "Unhappy Sirius Camper". A 5* and a1*; it couldn't be more disparate. I am aligned completely with Darwin's opinion of this book (and have to thank him for a glowing review that compelled me to get this) . It MUST be a case of how you see the glass. For the Unhappy guy/gal this is a half empty, for me it is absolutely overflowing. Author Adam Johnson captures the fragility of *us*, and shows that we are, as Whitman wrote, "Multitudes."

Johnson gives us a collection of 6 stories, the final "Fortune Smiles," a return to his 2013 Pulitzer Prize winning novel The Orphan Master's Son. In these few stories (far too few IMO) Johnson reaches deep into the situations and lives of People, pushes illness, death, jealousy, mourning, hope, even pornography and pedophilia, into the background and lets these wretched aching souls speak beyond words and judgements. I imagine each person will read them subjective to their own lives, but Johnson has a talent for slipping you into the story just barely ahead of your own biases or experience. The unrolling facts of each story, written so fluidly concise, take turns with you on an emotional and intellectual level -- a battle of the mind and the heart. Though not for every reader, others may find themselves in new frontiers of humanity -- seeing the child that was, in the monster; the other side of the coin; walking a mile in someone else's shoes; understanding how love and hatred can occupy simultaneously one feeling.

I remember for just a second feeling a thought skitter across my mind, formed somewhere beneath my consciousness (I can't even recall which story it was I was listening to). It whispered, this must be how God sees us. It may be hard to read, the human condition seems so raw, but it is at the same time reaffirming. Collectively we struggle, we fail, we carry on. There is a beauty in our ability to do so. I loved this read and hope it is read and loved by others. If I knew the sound your heart makes when it is pierced and wrung out, I would type those letters here, or if there was only an emoji -- it would be so much easier, because sometimes words just aren't enough. So I'll say it with 5 little stars.

The mixed narration is done beautifully, turning the stories into soliloquys unaware of an audience. How many times do we get to listen to a voice that conveys such emotion? Even in the gruff voice of the narrator on "George Orwell is a Friend of Mine" you hear the struggle of conscience overtake pride and position.

To those that think they will (or those that did) hear Betrayal, Danger, Denial, Selfishness, and Smashed Hopes, I heard my own conventionalities shatter their confines and expand. For me, the stories spoke gently that the glass, no matter how much it contains, has capacity. We are "Multitudes," and for a few brief stories, Adam Johnson was "the poet of the soul."

Blown away by every single page and every story

These stories BREAK me. Johnson pulls each story's string to the point of breaking and then plays them beautifully with precision and dexterity. 'Interesting Facts' about crushed me -- so good. Blown away by every single page and every story. Seriously, I might just have to put back on my white shirt and name badge from my 19 yo missionary days and go door-to-door evangelizing about Adam Johnson's book. "Have you read Adam Johnson?" "I know Adam Johnson is True." "A man get nearer to God by reading Adam Johnson's short-stories than any other fiction writer, save perhaps McCarthy". Oh, fine. That is probably an exaggeration, but still, GOD, these stories were amazing. Scary even. Like being transported to a foreign land and buried alive. He captures the language of the other and once you get on his train there is no getting off. OK. Perhaps again I am exaggerating. Perhaps, I am caught up in a convert's euphoria. But I'm not new to Adam Johnson. I've read The Orphan Master's Son and loved that too.

The narrations were perfect too. Each one balanced the art of reading with the dance of drama. They never crowded the stories with their voices, but supported the stories and made them each unique.

Here We Are, Now Entertain Us


Adam Johnson, winner of the 2013 Pulitzer for The Orphanmaster's Son, just won the National Book Award for FORTUNE SMILES, in which his 6 stories are insightful, inventive, at times humorous, and always "prosefully" potent.

Adam Johnson seems to me the writer's equivalent to Disney's best imagineer. In the Wonderful World of his Wizardry, Adam Johnson was able to move me in ways that seem counterintuitive and for characters that I'd never have thought possible: by the plight of a North Korean recently immigrated (unwittingly) to South Korea desperately longing to return home; a former warden of an East German prison wherein the Stasi committed atrocities who appears to be suffering dementia (with psychological undertones); cringing while feeling sympathy for a pedophile who was abused as a child; being frustrated by a Louisiana alcoholic/addict a few months after Hurricanes Katrina and Rita searching for his toddler's ne'er do well mom while being afflicted by a Bathsheba wanting to abandon the boy to go to Cali.

In the story "Nirvana," set in the near future, the husband tries to cope with his suicidal wife's paralysis and her desire to get pregnant. His wife is a big fan of Kurt Cobain and Nirvana. In trying to understand his wife's obsession with KC/Nirvana, the husband listens to some of their music and quips that he doesn't understand the song, "All Apologies," in which Cobain "never apologizes and doesn't even say what he did wrong." And, jokes to his wife, "Here we are, now entertain us," from "Smells Like Teen Spirit."

Finally, the story "Interesting Facts" is narrated by a wife and mother who had a double mastectomy for breast cancer. The story is one of the most crushing I've read in a while (and it's neither mawkish nor manipulative).

While some have written that the National Book Award committee shies from bestowing the prize upon a book of short stories, the purported reason being that the buying public does not buy many short story collections. I think such book are slow sellers because the public wants a nice Hollywood beginning-middle-end. And so, they miss out on some of the most moving stories, packing an emotional punch in a more compact frame. And yet, this is the second collection of short stories awarded the NBA in the past 3 years.

Imagine going to a gallery and seeing a painting of poo. It's artist's skill is unquestionable, the brush strokes are laid down with care and skill. From the details you can tell that a lot of research went into this painting.
From the length of the text on the plaque you can tell that someone clearly thought there is a lot of meaning to this painting.
But you're still just looking at poo.

All the stories are well written an well performed and very original. A few of them resonated with me more than others.

Read about the book in the NYT book reviews, but was blown away by the audio performance!!
Incredible writing, gripping plots, you will love this book even if you don't love all the characters

AN ECLECTIC MIX OF STORIES

This is an eclectic mix of stories told in disparate voices but convergent themes. Adam Johnson’s world is not a nice place and some times his heroes aren’t very heroic; but each voice rings clearly and truthfully and compels you to continue.

A new twist to storytelling. All of the stories stay with you long after you have finished listening to them. I am still left wondering about what happened next in each of the stories. very thought provoking.