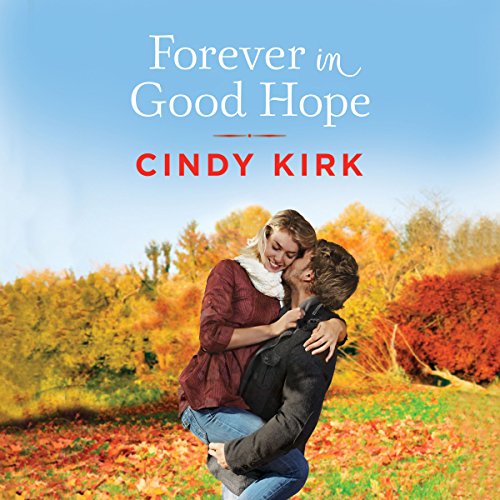 In the fourth installment of Cindy Kirk's beloved Good Hope series, a ruse with an old flame grows into romance.

Delphinium "Fin" Bloom returns to her hometown with one goal: get the mayor - her former flame - to approve a location shoot in Good Hope. But business turns personal when the two become entangled in a fake engagement to comfort his ailing grandmother.

For Jeremy, the romantic façade hits close to his heart. Still reeling from the way things ended between Fin and him all those years ago, he sees the fake engagement as an opportunity to get her out of his system once and for all. But instead of laying the past to rest, Jeremy quickly discovers he can't envision a life without her.

Now engaged to another man, Fin had long ago given up on the dream of a life with Jeremy. Why is it, then, that her fake engagement feels more genuine than her real one? As the sleepy days of summer come to a close in Good Hope, will Fin and Jeremy give love a second chance? Or will the revelation of a devastating secret put an end to the fairy tale?

A fake engagement that leads to love

Delphinium ‘Finn’ Bloom is back in Good Hope to try to convince the town leaders to approve filming a movie in December. The catch...the town will not be able to decorate for Christmas. Finn’s on/off boyfriend wants her to use her connection to the town’s mayor to reopen the discussion of the filming.
Why Finn? Well, she used to be high school sweethearts with the mayor, Jeremy Rakes. When Mayor Rakes’ beloved grandmother, Ruby, mistakenly believes that Finn and Jeremy are engaged and agrees to a life saving surgery...Finn’s new fiancé, and film exec, Xander, seizes the opportunity. He wants Finn to use her new status to sway the town’s council members. But as the weeks go by and grandma Ruby begins planning a wedding, can Finn resist the chemistry between her and Jeremy? Will she really go back to Hollywood and leave him and her family behind? Then there’s the secret that she’s been hiding for years...will she be forgiven when it’s revealed.
Another good story in the series, although it takes a while to warm up to Finn.

another hit from Cindy Kirk!

Another home run from Cindy Kirk her Good Hope Series has been one of my favorites, I find myself zooming through these books because I can't wait for the next chapter! That's when you know you're in a good book when you crave to know what happens next, and you have to pull yourself away from the book!! she has a way of doing that with all of her books you get addicted thanks for another Amazing Story can't wait for the next one

I have read all of the "Good Hope" books. Great stories of characters you can call in love with

Love all the "In Good Hope" stories!

Another Bloom family romance. Was an easy and entertaining read.....nothing heavy just easy and light.

Worst book in the series of 5.

I hate to give a bad review, but this was the worst book in the series! The story lines was all over the place and characters bouncing in and out of the story. The plot had potential that was never achieved.