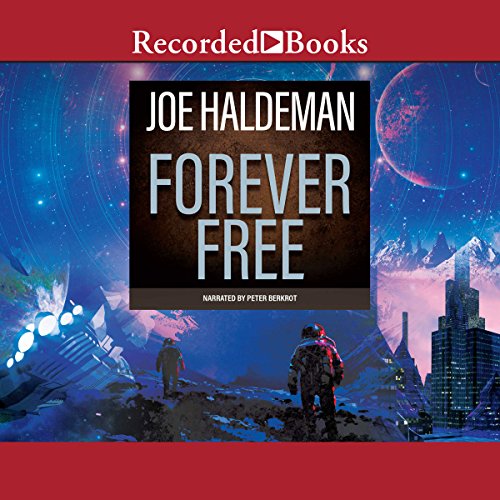 From Joe Haldeman, the all-time master of military science fiction, comes the new novel set in the universe of his Hugo and Nebula Award-winning classic The Forever War.

An epic story about war, peace, and the price of freedom, Forever Free reintroduces listeners to William Mandella - who has been living peacefully on the planet called Middle Finger, a refuge for humans who refuse to become part of the group mind known as Man. But after decades of this peace, Mandella and others are tired of living like zoo animals. So they steal a starship - and embark upon a voyage that will forever change their understanding of the universe, and themselves.

This is a VERY slow and &quot;stupid&quot; book. None of the events (except for the opening setting) make sense. Even though the book continues the story of same characters, it is a HIGH contrast to Forever War. There is NO ACTION. Whole book is set around boring family relations / human colony community relations. The ending makes no sense at all. It seem that the author wanted a cashout / ride to success solely on the coattails of Forever War.

Would you ever listen to anything by Joe Haldeman again?

Not ever going to listen to anything by Joe Haldeman again if i have to pay for it. There too many way better books already lined up for me.

Who would you have cast as narrator instead of Peter Berkrot?

Narrator doesn't make a difference because i couldn't wait for the book to finish. I had to endure it because i had paid for it.

My reaction was of a complete let down and disappointment.

Seriously, don't bother with it.

The conclusion to the story started in the first two books is far fetched to say the least. Incoherent and diffuse storytelling, leaving me far from engaged. I feel cheated to have such a cheap conclusion to a trilogy that seemed worth my time.
And what does the title even have to do with the book? It has no relevance or anchor. It is like Joe felt like he had to complete the trilogy for trilogies sake, not because he had a story to finish.

To compound the disappointment the narrator fails to read punctuations right, ending sentences at commas with downward inflection, then reading the second part of the sentence as sort of an afterthought. I can not understand why he would do that. Did not the writer compose his sentences to flow in a certain way? Does the narrator not understand what the function of punctuations is? Highly unprofessional.
Besides that he sucks at voices in dialogue. Often leaving me guessing as to who is speaking, not even sure of the sex of the character.
His voice might have a good tone but he has not mastered narration at all.

Wrong Narrator for the Job

I found the narrator off putting for this story, especially after getting used to the one in the Forever war. The voice was too hillbilly and lacked the appropriate gravitas required of the main characters. The story, which is good, was ruined by the unsettling voice of the narrator.

made up as he went along

just a deeply boring book with no sense of meaningful development. bland characters and stupidity.

Not as good as the Forever War or Forever Peace.

The narrator was different than the Forever War and that took quite a while for me to get over, although he wasn't bad. The story was strange and left me missing the ending of the Forever War.

Definitely wasn't the same caliber of scifi as Forever War. Frankly, this story and its prequel are only related in name, as very little, if any, of the Forever War was necessary to tell this story. Also, the narrator had some odd inflections and - whether it was his choice or someone else's - made some poor decisions on distinct character voices. Overall pretty disappointing. Now for Forever Peace...

Most I know who have read Forever War hopes for a sequel. This book should have stayed a dream. Slow in the beginning, confusing in the middle and down right unbelievable in the end. Sci-fi should have some sense of believability. This had none at the end. F.W. Is my all time favorite book and F.F. Is my all time worse. Too bad I wasted a credit for it.

huh. not sure what to make of that. definitely not a fan of the super macho voice actor. I think it jumped the shark at the end and then gravity failed and it never came down again.

What IS this guy’s voice?

Seriously this dude sounds like the rejected member of Alvin and the Chipmunks.. his narration sounds like the most annoying person you’ve ever met sucked helium and tried to act. Wtf Audible. You effed this series right in the a. Hope my money was worth it.

A Literal Deus ex Machina - interesting premise, but author undermines it through lazy plot devices. A very far cry from the genius of the Forever War.

Please note that there's no Spoiler Alert since hardly anything happens anyhow although it takes a whole book to tell you that. I think Douglas Adams once mentioned that this kind of literature exists.

So: As we leaned in the fantastic first novel Mr Mandela settled down on a planet with his sweetheart and other veterans of the forever war after both cloned mankind and cloned Taurans made peace .

now we learn that it's all bad. It's peace allright, but the planet MF sucks- it's as cold and as boring as Alaska. and cloned men/Taurans and the old human-the Vets- don't get along. it's like: what have the Clones ever done to us?

So some Vets peacefully hijack a ship to "hibernate" for the next 40.000 years and escape into the future.

Right after the start something goes wrong and the Vets have to return to the planet, only to find out that the entire population of the whole galaxy has vanished without a trace!

So they go to earth to find some answers.
they go to Disneyland where for some reason we now have to meet Shape Changers that apparently have lived among Taurans and Humans since ever in all necessary forms- from toasters, Angels, to scientist like Newton- but have also no clue what has happened.

Then something like GOD(s) appear(s) to tell that this vanishing act was HER/HIS/THEIR doing in some kind of moody experiment. The whole mass of people are stashed away somewhere in a cave, nude but piled to a cubic form and just about to feel chilly.

The Vets go back to MF without complaining. End