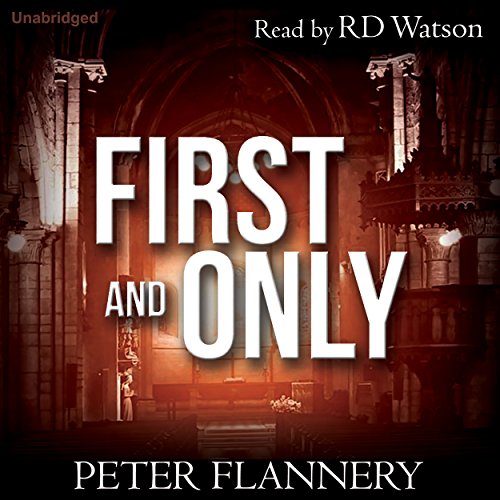 Do you believe in psychics? What if there really was someone who could see into the future, read people's thoughts, and move things with their mind? What kind of person would they be, and how would they reveal themselves to the world? Psimon is just such a man, a real and genuine psychic. But Psimon has a problem. In five days' time he is going to die at the hands of a serial killer known only as Lucifer. His only hope is to enlist the services of former SAS soldier Steve Brennus, a man whose family life and business have just collapsed in ruins. Psimon knows he is going to die. He has seen it. But could a former SAS soldier have the strength to overcome the visions of the world's first psychic?

From the intensity of the first scene to the dramatic climax, First and Only pauses just enough for listeners to catch their breath. Do not take this book to bed if you fancy an early night. You have been warned.

Slow developing, but the story comes around

British story and it takes me a while to get myself tuned in which accounts for me to restart 6 tomes to adjust to the accent.
Is this the best book i have read...no, but it is interesting because it comes with some new and novel ideas about psychics and religiosity fervor . I enjoyed the listening to the development of a bond between the two main characters. I listened straight through the entire book without stopping, because the events in the book were quite well described and I enjoyed the authors ability to describe the development of frustrating situations and keep the story moving at the same time

A very interesting concept that is fairly well developed. There are certainly some cracks in the logic. Rarely does a book need to be longer but a little more would have probably patched them. Not a bad easy listen.

Note: The American accents are so bad they are awesome.

I cannot express how much I enjoyed this book! It pulled me in, and would not let go.

1st time listened to this author, would recommend to others. interesting storyline. would read future books from this author.

Narration was superbly done. One of the best books I have listened to in a long while.

The mama a genius

Combines Silence of the lambs ,psychic powers, and a Tom Clancy novel. Incredible driven story from probably the most underrated author out there

Very interesting listen. The story kept me engaged and I found myself not wanting to pause it, unfortunately life demanded it. I will definitely listen to more of his books. T he narrator did a wonderful job relaying the story and giving a reality type feeling.

The story is a dark murder mystery that spans almost 20 years all centering around stopping a serial murderer. The story held together fairly well until the author decided to have the protagonist, Simon, inflate the importance of additional characters to include UK and US admirals and generals to play crucial roles in the hunt for the murderer who had, while still heinous, killed less than a dozen people over the many years.

Still, it was a good read and the narrator was quite good.

Worth the Credit. Enjoyed seeing the friendship

... grow as they bonded during a crisis. I was frustrated as the plot was a clumsily moved forward thru a couple of bottlenecks using conveniant miscommunications (ex: with steve's wife and daughter). Overall a good job on first book.

Husband and I thoroughly enjoyed listening to this performance as we drove from the west to the east coast in our motorhome. Unusual subject matter for author, but SO good. I have read other works previously and chose this one for our entertainment based solely on the author... did not know anything about book. Very good. No need for politically-correct epilogue. Much thanks to narrator and author for keeping us happy on the road.