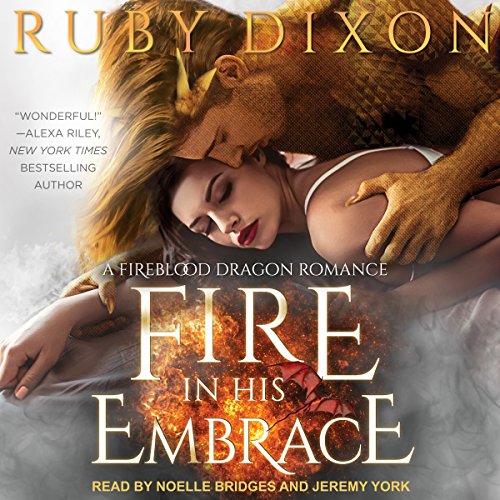 Fire in His Embrace

There's only one way to tame a dragon.

Emma Arroyo knows this. She also knows that the big golden dragon captured by her brother's biker gang is in trouble, and it's all her fault. He followed her scent, and now his life is in danger.

She has to fix this, somehow. If she could talk to the dragon, they could form a plan to escape, both of them. But the dragon's mind is wild and full of uncontrollable, killing rage. There's no reasoning with him.

There's certainly no freeing him, not when he's like this. But Emma can't leave without him. There's only one way to solve this problem - a mating. When Emma approaches Zohr to claim him as hers, she realizes just what it means to be a dragon's mate, and how much she's in over her head.... And she learns how fiercely possessive a drakoni male can be.

Fave story in series so far

The main character is string and independant and not needy like previous main characters. I like her alot. Im going to skip over Amy’s story because she is too timid and weak for me and the few times she was in previous stories she annoyed me with her delicateness. But I look forward to seeing if the doctor gets a dragon.

I am enjoying these cute storys. can't wait for the next one . I hate that there not all here to listen to.

All men are bad, and now some dragons are too

I love Ruby Dixon’s Ice Planet Barbarian series, and the first three books in the Fire Blood Dragon series are free as part of Audible Escapes, so even though the first was good and the second was okay, I got this one and hoped to reverse the course of diminishing returns. Sadly, this book put the nail in the coffin for me on this series.

What I liked were fun, sexy good times with fierce, protective, alpha dragons. What I didn’t like was the constant air of hopelessness, where all human men are predatory scumbags and all women (except the lead in each romance, or the future lead for the next books) are desperate, spineless slaves who trade sex for survival. This book continues that theme, where even Emma’s brother is an abusive jerk. The only good man is long dead, and only referenced by Emma. You mean to tell me there isn’t one gang of survivors where women are strong, respected, or protected? In three books, there couldn’t be a few warrior females among the towns? Apparently not.

Worse, this book expands the Drakoni world, explaining their backstory a bit but also showing that Earth isn’t the only world filled with both good and bad. Because 99% of Earth’s conditions/humans being crappy wasn’t enough of a downer.

I did like that with Emma, we finally got a woman who is strong and willing to take the initiative. This got past the dragon/human language barrier faster, which was a more prolonged annoyance in the first two books. There’s also a growing number of dragon/human pairs, which gives us more action and positive interactions with greater groups when these pairs get together. But, future books promise many more stories of scumbag men, desperate women, and deranged dragons without any promise of a cohesive story arc to get us to a better world or funner stories. If I’m going to pay for fantasy romance books, I’ll stick with the author’s Ice Planet Barbarian series (although that series also continues her affinity for primitive & dirty living conditions) or Anna Carven’s Dark Star Mercenary series, that has alpha male alien warriors, allowing the bonus of technology to offer showers. I’m down for dirty nooky with dragons and aliens... not so down for dirty worlds and people.

I love this book series and performance. I highly anticipate the next one in the series.

I stopped 2 hours into the book and I couldn’t go on. Don’t get me wrong, I really like the idea of the story, but the flow made me confused.

In the beginning, Emma is pulled into a gang by her brother who is a member and made to be the cook (“because [she’s] a chick”) for the leader. It was a good pace at first, but then all of a sudden there’s a dragon attack and then it was done. It was just a casual mention before going on with the story. The only details I got about the attack was that half of the gang were killed, including her brother, and the attack was actually a rescue because her friend was suddenly with the gang and her dragon came to get her back. Then, her friend was gone along with her dragon mate and his companion he brought with him. It was an abrupt mention. Later, Emma suddenly had a gash on her head and it was explained later that she had her friend hit her to make it seem like Emma was loyal to the gang or something like that.

What I like about this is Noelle Bridges and the idea of the story. That’s it. Bridges narrates smoothly and gives emotion to certain dialogue, like Emma actually sounded nervous when she spoke to the gang leader after she had mated. Jeremy York was good, but he narrates a tad slow for me and his low voice sounded forced. I’ve heard him narrate better. Maybe this wasn’t the book for him.

Another excellent addition to the series. I was initially worried that the beginning of the story would get mired in backstory of the character Emma but Ruby does a great job of quickly bringing the audience up to speed on where the last volume left off without sacrificing the background you want to develop the character who will be the protagonist for the whole story.

In the same style as the others in the Fireblood series there is a pairing where a male dragon (in this one Zohr) is attracted to a female he decides is his mate and their contact and connection help clear the madness the dragons experience in this realm. Again we see a large focus by the male on wanting their partner to be pleasured and consenting to whatever they do as well as feeling very possessive and protective and a desire to impregnate their mate.

However, I feel like this pairing stands out the most so far in the series in the way they seem to hold equal amounts of power. Emma is a very independent, strong, survival focused female character who expresses a great deal more dominance in the relationship than either of the previous females. There is also an interesting expression of Emma knowing how to armor herself emotionally and mentally and in essence at times blocking Zohr out. Zohr for his part also defers to Emma quite a bit and instead of the way other dragons behave does not try to convince or overpower her. This story is the first glimpse of an equal partnership in this story universe and it is really satisfying.

There is also a deeper dive into the politics and history of the dragons and the lives they lived before the rift. I love how with each volume Ruby reveals more of this dragon world and how it is leaking into this dystopian world. Zohr also remembers a bit more than the other dragons and we begin to see these different couples we have come to know organize together.

I will say I was disappointed with the final confrontation at the end of the story, it felt rushed and anticlimactic and not satisfying for all that was developed in the rest of the narrative. And again as Ruby has done with each of the other volumes in the series she creates the beginning of a bridge setting up a character that will serve as the new protagonist in the next story. I don't take this as a cliffhanger but something that creates an easy transition and allows the audience to get a taste of what the new pairing will be like. I actually really enjoy this.

Overall this is an excellent addition to a well written series, there is scattered sex scenes but a deepening story that draws the audience in and makes me curious to learn more about the world.

Fits right in with the series, so if you are this far you will like it. Heroine is a bit more blood thirsty which I liked. Again, lots and lots of steamy sex. This time around the background world is a bit more explained. It is good to have more information on where the dragons come from. Don’t read this if you are into serious post-apocalyptic details, because this one has holes. But if you in for a sexy romance, this one is it. Narrators do a good job.

I love this series. I can't wait for the next one. addictive, blood fire and sex.

A Dick and Jane Book

I really tried to listen to the entire book, I really really did, but I just couldn't make. If you remember your Dick and Jane Books you may have read in the first grade, well this book is written much the same way. I found the book could not hold my interest, my mind kept wondering causing me to do a great deal of rewinding, which flustered me to no end. I found it to be boring, elementary and hard to follow the story due to its lack of background development, leaving many questions unexplained. I found the characters to be juvenile, weak and just plane disappointing. The narrators left much to be desired....the voice for the Dragon when narrated by Noelle Bridges sounded like a teenager, not the rumbling growl you would expect from a very large warrior.

I wish I could give a more favorable review, but....try as I mite, I could not.

This was the first time I have read this author, but....I will try another one of her books before I place her at the bottom of my favorite authors list.

Fire in his Embrace" is the third book in a 8 book series... "Fire blood Dragons" by Ruby Dixon... apocalyptic Dragon shifter Romance ...Ruby Dixon is my top favorite in Alien romance novels... Jeremy York is one of the best narrated voices for romantic books... this series of books will draw you in with its love and laughter ...the character interact with  other characters in each book... start with book 1... "Fire in his blood"... promise you will enjoy