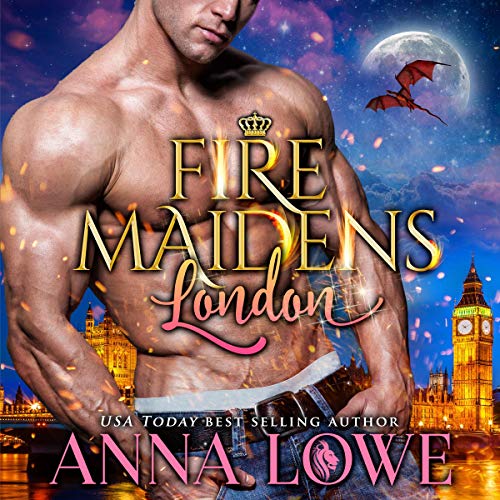 “Rebel with a cause” Gemma Archer flees Boston, one step ahead of a creepy stalker. Now she’s in London, trying to build a new normal and absolutely, positively not getting involved with any men. That is, until an irresistible stranger prowls into her life. Liam is a sweet, sexy modern-day knight who sparks her sizzling desires. The problem? He’s as loony as some of her relatives. Dragons? Lion shifters? Werewolves? The poor man really seems to believe the tales he spins.

Liam Bennett is fresh out of the military and doing his best to adjust to civilian life. But fitting in was never his forte as a shifter of mixed blood. He’s part lion - a member of London’s most noble family - and part rogue, with “undesirable” dragon blood. When the Guardians of London hire him to help maintain law and order, Liam jumps at the chance to prove himself.

Soon, he discovers nothing is as it seems - not among his allies, enemies, or even his own family. The only thing he can be sure of is the danger Gemma is in. A deadly foe has stalked Gemma for thousands of miles, and Liam has no choice but to spirit away his destined mate to his ancestral dragon home - the remote castle in Wales he’s been avoiding for years. But hiding out is not enough. Can Liam and Gemma survive cunning enemies and the deceptions of the past?

Anna Lowe’s Fire Maidens: Billionaires & Bodyguards series: Danger lurks over Europe, where a ruthless dragon clan plots to seize power in the grandest, most glamorous cities. The guardians of old have summoned a new generation of shifter heroes to protect the castles, cathedrals, and cobblestoned streets of their ancestral homes and to seek out the last of the Fire Maidens, women coveted by the dark lords for their royal blood. Those women are absolutely off-limits to the young warriors tasked with protecting them. But destiny, of course, has other ideas....

What a beautiful romantic story. I was left feeling all warm and fuzzy. Mind you there was lots of drama, plotting and  sneaking about as well.
I enjoyed the london sights and  the paranormals that blended into the very structure.
Another satifying book by an author that has become one of my favourites. RECOMMENDED and  please read in order for best enjoyment.
The narrator did a perfect job as usual , so all l heard was the story unfolding.

Gemma fled to London to escape a stalker in the US. She's settled in well, is house-sitting on a long-boat on the canal and has a job she enjoys in a bookstore. But her main driving force seems to be good causes of all kinds and whilst traveling on the tube to a rally she sees a man very similar to her stalker. Just when it looks like he's going to attempt to get too close a tall attractive man gets on the tube and stands between them. This is Liam, a lion shifter working for The Guardians of London.

She's decided to avoid men, but that is impossible to do when she instantly feels a connection to Liam her rescuer. But when he starts talking about her being in danger from dragons and tells her about other shifter species she believes him to be suffering from some form of mental disorder just like her father.

Liam is a shifter of mixed blood, his father was a dragon and his mother was a lion. He's an anomaly and looked down upon by his pureblood lion relatives. So when he's offered a job with the Guardians, he accepts hoping to prove his worth to them. The same day he met Gemma on the tube he was given a new task by them, meet, seduce and mate the newly found Fire Madien who just happens to be Gemma. His skills will be put to the test as he attempts to keep Gemma, his mate, safe not only from their enemies but also from the Guardians themselves.

There is lots more I could tell you but that would involve more spoilers than I want to give so I will just say that I loved this book, I loved Liam who was so loving and strong, I loved Gemma who was such a strong and good person and I really liked the main supporting characters, Garath a raven shifter and Sergio Liam's friend and one sexy wolf shifter!

The narrator of this book is the super talented Kelsey Osborne, the voice of Anna Lowe who always delivers a moving and exciting performance which always brings all the characters to life. I love the way this author and narrator work together to deliver books of such quality. The research of the locations for this book carried out by Anna Lowe was very thorough, I know well the areas in both London and Wales featured in this story and her descriptions are bang on! I am really looking forward to the next book in this series.

I was given this audiobook as a gift and am voluntarily writing my review.

I don’t know how Ms. Lowe does it. This book was so good! There were times when I was on the edge of my seat wondering what would happen next. If you like paranormal romance, you will love this book. She is an outstanding author!

The next Fire Maiden has been identified—Gemma. Liam and Gemma first meet on the Tube (London Underground) when she is being stalked and their connection is almost immediate. She fled to London because she was being stalked in Boston.

The Guardians of London tasked Liam, a mixed-blood lion shifter, with mating Gemma (she really is his mate), producing a child and then turn that child over to the Guardians to be raised. If he refuses, one of the others will be more than happy to step in and handle the task. Liam is surprised that the Fire Maiden is Gemma.

Liam talks to her about shifters, dragons and other supernaturals and she thinks he has PTSD and a little crazy. Her father had been telling her about dragons and she never really believed him but eventually puts two and two together. Her father spoke of the same things that Liam spoke of. When a dragon is after her, circling the boat she is housesitting, Liam rescues her and she witnesses his shift. The pace of this book is great! As with Ms. Lowe's other books, I got lost in the story. I couldn’t believe it when I was listening to the epilogue because I didn't want it to end!

Gemma turns out to be a very strong person when eventually confronting the Guardians, specifically Elektra, who was a b!tch. This book has a lot of drama and suspense and very good fight scenes with the villains.

Liam’s friend Sergio has a large role in this book and he was awesome! He had Liam and Gemma’s backs throughout the book. The ending was a good set up for Sergio to have his own book and I hope he does.

Kelsey Osborne did a great job, as usual, with the narration. I was given this free copy audiobook at my request and I have voluntarily left this review.

BOOK REVIEW......
I loved it and couldn't wait to finish, of course now I'm eagerly anticipating the next book. A great paranormal book that will keep you engrossed in this amazing world

NARRATOR REVIEW.......
Narrator did a great job of bring the characters voices to life

This is Liam and Gemma's story. Gemma is fleeing to London to escape a stalker back home in the US. Little does she know all her father has told her about over the years is going to catch up to her in London. Liam, a lion shifter, took a job with the Guardians. After all his bloodline dictates he has to prove his worth. Secrets are reveled and a budding romance that begins at a rally. The Fire Maiden series is moving along nicely. We get courageous females and to die for protectors, this series is a must, especially for any pnr fans. I voluntarily reviewed Fire Maidens from the author.

This is another well-crafted story by Ms. Lowe. I really enjoyed the chemistry between Gemma and Liam. He was sweet, charming, and funny. Gemma was smart and sweet. Loved the side characters of Gareth, Sergio, and Gemma's slightly addled father. I even found Electra amusing. She was the perfect semi-villian.

The narration was well done. Ms. Osborne certainly has grown as a narrator since I first heard her.

I'm looking forward to book 3. I bet it's going to be just as lovely!

Just like the first book in this series, I absolutely loved this book! So much action and love as well as attempted deception and an awesome surprise with our lovely shifter this time. I don’t want to give anything away but will tell you that you will love this book!

I have been a long time fan of Anna Lowe's work, and this book lives up to the expectations i have had for her.

You start the book with a young woman, Gemma, who is heading out to a protest in London for a cause she feels is right. During the first scene of the book you find out a bit of her backstory that she is in London to escape from a stalker, while a different stalker appears to advance on her.

The enters Liam, a lovable lion shifter from her Paris book featuring in his own story. He interferes with the guy on the subway saving Gemma from the guy cornering her on the subway. They seem to fall into an intense attraction until they have to go separate ways, her to the rally, and he to a call from the Council.

Liam then learns that Gemma is a Fire Maiden and the council orders him to seduce her. Which goes against everything both Liam and his lion believes in. Liam heads to guard Gemma, while trying to convince himself that he will win his mate legitly and not by order of the Council. When Liam comes to Gemma with a story about dragons out to hunt her, she feels like he must be suffering from PTSD, even though her father goes on about the same thing. Even though she doesn't believe him she can't seem to tell him no, thus starting his position to guard her.

Will these two be able to work everything out? Will Gemma be able to stand up not only to the Lombardi's but also to the shifter council? Read the book to find out more I don't think you will regret it.

I love her series. I love the romance and the plot. I also like how she just doesn’t end it without not know what happens after.

Anna does it again with this amazing story, it is another must read and/or listen to.