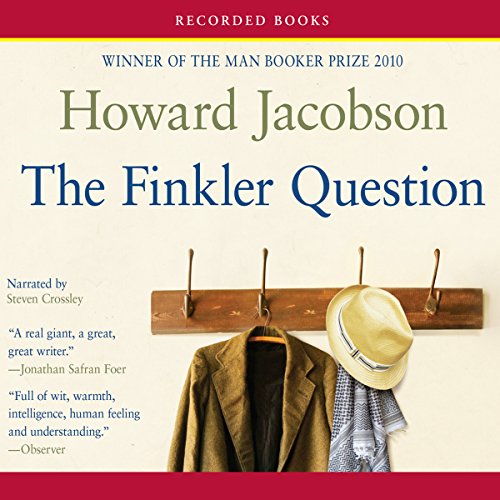 This Booker Prize-winning novel doesn’t cover a lot of thematic ground; like Jane Austen, Howard Jacobson likes to explore a narrow field of study. In his case, it is the UK’s Jewish population especially as focussed around north London. But also like Austen, Jacobson’s miniaturist observations can illuminate and touch on universal questions, and has room for multi-layered comedy.

Julian Treslove is an unspectacular television producer of arts programs and a celebrity impersonator, with two failed marriages behind him and two distant, resentful sons. A gentile convinced that a Jewish identity would offer asylum from his identity crisis, Treslove is acutely envious of his old school friend Sam Finkler, now a highly successful author of glib pop-philosophy best sellers with titles like “The Existentialist in the Kitchen”. For Treslove, Finkler comes to represent Jewish identity: The ‘Jewish question’ (in all its loaded historical ambivalence) becomes the Finkler question, at once sanitized and personalized. Both men regularly meet with their former teacher, Libor Sevcik, a colorful Mittel-European transplant who serves as the book’s heart (as well as narrator Steven Crossley’s finest achievement). He is crotchety, funny, and touching in his devotion to his dead wife, even while on hilariously awkward dates.

Jacobson has great fun in pitting his character’s different approaches to Jewishness against each other, particularly Treslove’s gauche appropriation (“He looked like Topol; that’s how Treslove knew he was a Jew.”). There is a sense that the three male leads are facets of one personality with a schismatic approach to Jewishness: Crossley, however, is able to give each one their own unique voice. In fact, with The Finkler Question, Crossley gives a masterclass in narration. His characterizations are colorful without lapsing into caricature, and he unfailingly gets the intent behind each line, each rhetorical question, each instance of passive-aggressive indignation (and there’s a lot of that). Especially with this book, the narrator has an important task: the physical attack that kicks off Treslove’s identity crisis hinges on a linguistic confusion, and Crossley’s obsessive delivery of each permutation of the attacker’s garbled words is just one very funny moment in an excellent performance. Dafydd Phillips

The Finkler Question is a scorching story of friendship and loss and of the wisdom and humanity of maturity. Funny, furious, unflinching, this extraordinary novel shows one of our finest writers at his brilliant best. Julian Treslove and Sam Finkler are old school friends. Despite a prickly relationship and very different lives, they've never quite lost touch with each other - or with their former teacher, Libor Sevick. Now all three are recently widowed, in their own way, and spend sweetly painful evenings together reminiscing. Until an unexpected violent attack brings everything they thought they knew into question.

Meh. This novel ends with a whimper.

When I started the Finkler Question, I had images of Saul Bellow, Philip Roth, Mel Brooks and Woody Allen floating in my head. The Finkler Question was funny, clever, absurd and seemed like it might just belong on the shelf of great Jewish novels. Unfortunately, this momentum didn't continue. FQ was still amusing, but the characters toward the end seemed a tad too cut-out and caricatured, the novel too formula-driven, and the prose too tired. It was looking for Herzog, but in the end found a book that could have been written by Jonathan Safran Foer (not a high compliment).

That doesn't mean I didn't like swaths of it. It just didn't possess enough sustained energy or original genius to justify the attention it got a couple years ago. A good book, just not a great novel.

This book really wonderfully written and wonderfully narrated. It's a book about ordinary, although very specific, individuals living in an ordinary setting of contemporary life. The main character thinks a lot, is obsessive, and we listen to his mind ruminating for most of the book. It's serious and believable and the characters in the book are really having fun for a while, although it's really a story of isolation, consequences and quite a bit of superstition. I liked it a lot. If you like novels that offer insight on the human condition, you will love this book.

Jacobson is a strong writer but I think, unless you have any great investiture in London's Jewish community and the concepts of guilt and shame, then, like me, you will probably find this is a story that doesn't really go anywhere or do it quickly enough. Jacobson writes with some solid and subtle irony, but the narrator didn't help with consistent child-like interpretations in the speech.
I'm quite amazed it picked up the Booker. I didn't think the main character, Treslove, or the eponymous Finkler, were strong or different enough characters and didn't particularly care what happened to either. It did pick up a little in the final third with the Libor sub-plot but, even so, I found it came as a great relief when it was over.

One of the best reads of the year. I loved it. It's a classic piece, up there with the best English satirists. Timely.

The chapters on this recording are all messed up, goes 5 chapters, then returns to chapter 3 then runs through to 8 then repeats 7 and 8 before going through the epilogue only to return to chapter 11 again.
I had to buy the book and follow a long to make sure I was in the actual chapter I was supposed to be.

Error in recording, story is repeated twice, but not back-to-back

This book isn’t about 22 hours long it’s about 11 because each part (1 and 2) are repeated twice almost completely. Listen to chapter 1-6, then skip to 33. I’d be annoyed if I was the author, the repetition initially made the book infuriating to listen to until I worked out it was repeating. Even so it’s not really my cup of tea, I’m normally a sci-fi fantasy reader (I’m reading it for a book club) and not too much happens but I can see it’s well written so others might like. The narration is excellent, I’ll look him up to see what else he’s read.

Technical difficulty needs to be fixed!

Was unable to download the audiobook, requested help but have not received a solution to the problem, not a happy subscriber!!! Please credit my purchase, will buy from another provider, thanks

Reader did an excellent performance reading multiple characters with skill and ease of audible identification.

Book rambles on far too long with little or no story - just a tedious analysis of its three main characters and their interactions.

What could Howard Jacobson have done to make this a more enjoyable book for you?

Edited out at least half of it.

His skill in presenting the different characters in a pleasing and identifiable way.

Was Finkler Question worth the listening time?