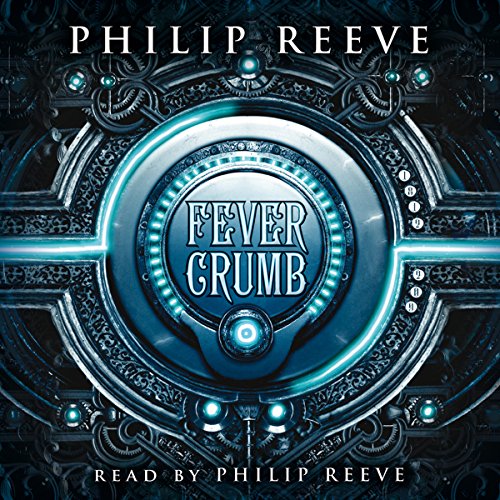 Fever Crumb has been adopted and raised by Dr. Crumb, a member of the Order of Engineers, where she serves as an apprentice. At a time when women are not seen as reasonable creatures, Fever is an anomaly, the only girl to serve in the Order. Soon, though, she must say good-bye to Dr. Crumb to assist archaeologist Kit Solent with a top secret project.

The assignment involves a mysterious room that once belonged to Auric Godshawk, the last of the Scriven overlords, and Fever must help unlock it. The Scriven, not human, ruled the city some years ago but were hunted down and killed in a victorious uprising by the people.

As Fever’s work begins, she is plagued by memories that are not her own, and Kit seems to have a particular interest in finding out what they are. All Fever knows is what she’s been told: She is an orphan. But whose memories does she hold? And why are there people chasing her, intent on eliminating her? Is Fever the key to unlocking the terrible secret of the past?

I'm surprised no one reviewed this yet, I've had this book on my wishlist for a few months (dunno how it got there in the first place) and 2 weeks ago I decided why not and I'm glad I did...

I bought this book after I just finished "Insurgent", the second book of "Divergent", and I must say I liked Fever Crumb alot more than both those books and even Hunger Games, what I like most about it is the no cheesy love scenes and emotional complications that spam half of the book, I grew very fond of Fever and can't wait to read more of her in the second book "A Web of Air" and the yet to be released third.

If you liked young adult books like Maze Runner and Hunger Games, you'll likely enjoy this book too, Reeve has done an awesome job in both writing and narrating this book.

Love it. Great mix of adventure, science and feels

I thought the author did a great job of reading his own work, and I love his stories. there is an intimacy that is created when this occurs. although technically "young adult", this adventure easily held my middle aged attention.

Interesting tale. Entertaining. Rich environment created to explore. We meet Fever Crumb mid-story and the details of the world around are teased out as she comes to terms with who she is, who her parents are, and how she is going to make her way in the world. The details on how the technology works or how the world got to the point it is at are left in an almost impressionistic vagueness at times, which piques my curiosity. Pacing is quick. I enjoyed the tale and look forward to the next installment.

The story and the narration are truly lovely. Philip Reeve delivers magic all around. Wonderful.

Too short, but a great trip back to Mortal Engines

I love Fever, she's a great blank slate type of character that adds some clarity to a very messy world and makes the other characters stand out. Seems like the story is going to some interesting places, and as usual Reeve is great at describing his world.

It is a good book, I like to get some back story of Mortal engines.
But the book do lag or shutter at times and that is super annoying.

A Brilliant Prequel read by the Author

Centuries before Mortal Engines, Fever Crumb is a story about the beginnings of the Traction Era that ends up creating a whole new interesting world of post-post apocalyptic society and the politics and people living in them. Though Reeve is not a trained actor like Barnaby Edwards, he is still able to bring the characters (especially Ted Swiney and Bagman Creech) to life and has included a few pieces of cut content from the original book as well as a short interview. Excellent work all around.

Interesting Premise but a little Convoluted

I enjoyed the premise and the internal visual of cities that move. Also Fever's growing relationship with the engineer revealed to be her father.

Philip Reeve does not disappoint- as always, his characters are well developed and the continuity of the storyline is fantastic. If you’ve read the first four books in the series, you will find yourself connecting the dots throughout the read, which is quite fun. I really enjoyed this book and highly recommend it.