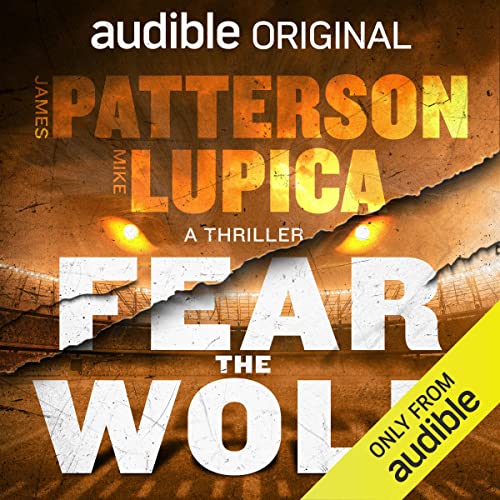 Best-selling author James Patterson and award-winning sportswriter Mike Lupica team up to launch this power-family football thriller, a pre-game for their next blockbuster, The House of Wolves.

Meet the Wolf. Joe Wolf. He’s the head of a multibillion-dollar empire—a newspaper, a holding company, a football team—and the head of a family that puts King Lear to shame.

His empire shows signs of crumbling when he’s approached with an “offer” to sell. It’s clear from the start that Joe is going to pay the ultimate price—and maybe more—if he refuses.

Okay, I have been an audible listener since December of 2006. I’ve listened to 448 titles and periodically I will fill in between books with an audible original. The ones I’ve listened to usually have an entire story. But, I am really really really upset today because the James Patterson original just left me hanging. It is nothing more than an advertisement for the upcoming book which I will not download because I never listen to James Patterson books. I was only looking for a short listen between novels and thought this might be a “fluff”listen. But I did expect a story-not a preview /advertisement. This bit of trickery is damaging to the audible originals brand.

Not the whole book, just a preview.

you're not getting me with the free first chapter nonsense. Make it more clear it's not the whole book. Not impresses

Extremely short cliffhanger novella. An unknown person is going to kill the head of a sports team. That’s it. You have to buy the next book to find out who wants him dead and if he is dead

I just learned about this short book today. What a great partnership between Patterson and Lupica. I’ll definitely be continuing to read the next book in the series.

This thing is short and sweet. Doesn't mess around getting to the point and leaves you on a quite the cliffhanger. Mostly whets the appetite for their next title, but it sure does work! Can't wait to listen to House of Wolves now.

What can I say, this is another short story with James Patterson that I couldn't put down, an excellent listen.

Find beginning to end I just wanted to keep hearing or listening for the next chapter. Enjoyed it looking forward to the next book.

Nice start to a good suspense Thriller. It’s got all the elements You’d like; football Football girls money family etc. it’s very well read. I’m looking forward to the next one.

Story is a little outside my usual, but this definitely made me want to listen to the whole book.

Awesome! Thank you for the intro story

I loved the opportunity to learn more about the story's premise and characters. There's a million ways the next book could be awesome and I'm now excited to find out which!