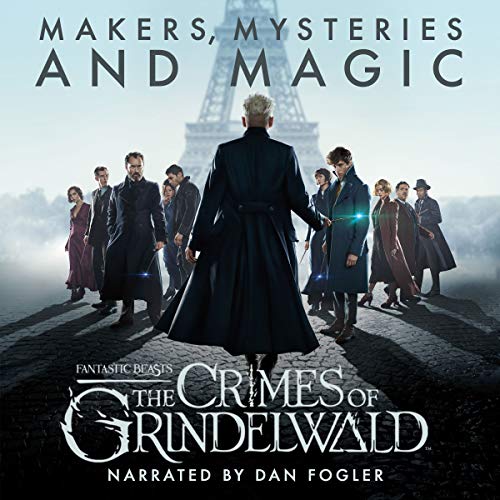 Fantastic Beasts: The Crimes of Grindelwald - Makers, Mysteries and Magic

This is a behind-the-scenes audio documentary, recorded on the set of the movie Fantastic Beasts: The Crimes of Grindelwald.

“This film is a different beast.” (Eddie Redmayne)

Over 100 hours of interviews with the cast and crew have been used to create this unique audio adventure that’s sure to be loved by fans of filmmaking and the Wizarding World. Across its nine chapters, you will explore themes such as what’s next for Newt Scamander, whether we’ve seen every side of Albus Dumbledore, what makes Dark wizard Gellert Grindelwald so dangerous, and what connects the worlds of Harry Potter and Fantastic Beasts.

With unrivalled access to the film’s cast, directors, producers, and makers, hear what it takes to build 1927 Paris on a lot just outside London, discover what influenced the design of the Elder Wand, meet the individuals who constructed iconic wizarding world locations including Hogwarts’ Defence Against the Dark Arts classroom - and mastered the craft and artistry required to fill it with authenticity and excitement.

Give your eyes a rest and your ears a treat. Take a trip behind the scenes of the Wizarding World like never before.

A very good surprise: A must have for nerdy obsessive Potterheads

I've been an obsessive Potterhead for the last 17 years, I only buy films in BluRay for the bonuses; I am completely the audience this audiobook was targeting.

You could imagine that an audio making off would be boring but absolutely not. Dan Fogler not only explains and introduces the people who took part in the making of this film but he also "plays" the narrator and can't help praising the beauty of Jacob. There is a lot of humor in this audiobook which is a thing you usually don't expect in a behind-the-scene documentary.

The quality of the sound is really good. As most of the people are being interviewed on the set or in their workshops, you can sometimes here background noises when people from the Arts department or Construction department. Surprisingly, these sounds are not bothering and make you really feel like you were there, on the set or next to it. Even without the images, it is possible to visualise every detail of the make up, costumes and props. I couldn't have imagined it would be so much fun to listen to.

The music used in between the "cut scenes" fits perfectly the atmosphere of the movies. You can hear the care taken to cater this audiobook.

A must have for Potterheads.

Read the reviews. Know before you buy!💖

I read before purchasing the book. I did, and it saved the day! This is NOT the novel I wanted. This IS an entertaining look behind the scenes. All the complaints were valid, unless you actually wanted an entertaining behind the scenes look. Ok, Mr Foglers’ voice becomes a bit tiresome at times, as is the long wait between chapters. But, I enjoyed it overall! Now where is the Novel??!!

It's Really Not Bad!

I almost didn't get this based on the reviews. Dan Fogler was a little obnoxious, but didn't ruin it, and I thought the music was wonderful. Exactly as the description states, "A Behind the Scenes Documentary". It was informative, and I had to go back and watch the movie again.

The content was mostly interesting! I loved hearing all the background info about the costumes and major props used in the film. I did not like the longer pauses in the audiobook, where there were stretches of music between Dan's commentary. I also did not like the lower toned music used in certain parts, like in ch8 I think it was, when talking about Grindelwald. The lower toned background music is distracting especially since I listen on headphones, so I have it cranked up to hear the voices clearly, and the lower toned background music was overwhelming.

What a disappointment! Maybe I didn't read thoroughly the description; maybe I bought too quickly; maybe I simply assumed too much! Still,explain how one "tours behind the scenes" AUDIBLY??? This MAY WELL BE an amazing VIDEO special about the making of this 2nd 'Fantastic Beasts ' movie... But I found it gravely lacking as an AUDIO presentation. It felt like I was listening to a montage of the 'extras' one gets when purchasing a DVD... Who thought this would retail well as an AUDIBLE???? 1. I was honestly expecting a book version of the story... My mistake! 2. I found the narrator too cheeky, too animated for an audio rendition. His verbal 'schtick' was often hard to track and overplayed. 3. Often, the person speaking was not identified; and while I certainly recognize David Yates' name, his voice is not one I readily recognize without minimal introduction, even repeatedly (sorry, David). 4. Lastly, Ms. Rowling has certainly learned her way around the entertainment industry; so much so, that the very thing that drew us to her writings has been eliminated! The elaborate character development and interpersonal relationships she weaved so well... which thoroughly pulled us into the 'wizarding world' -- has been eliminated for a fast track to the big screen! At least her play, The Cursed Child, was given to us as a screenplay... Yet, that was a verbatim script with some stage direction side notes. 'Beasts' just went straight to the Red Carpet! I enjoy the adaptations, the movies... But I wanted a book! I wanted more of what J.K. Rowling built her repression on: in-depth character development!!! Instead I got ONLY THE AUDIO of a 'behind the scenes' television special and I feel cheated. Counting this month's Audible Credit as wasted. I heartily suggest you listen to a sample before you buy.... I preordered ----- a mistake I'll not soon forget.

There is no story here! It’s just a bunch of people talking about the characters. Complete waste

First - watch the movie- then enjoy this book - then watch the movie again to “see and hear” what you may have missed the first time! Loved the insights to all aspects of the creation of the movie!

This is a documentary on the making of the Movie The Crimes of Grindelwald. If you are looking for the actual book, Good luck.

Fun to learn more about movie

Great to hear actors and more tell their thoughts about their jobs. warning....not a book.