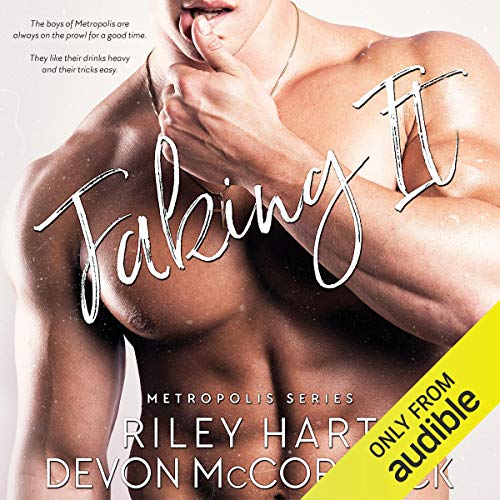 There's never a dull moment at Metropolis...the condominium known for having the hottest openly gay tenants in town. The boys of Metropolis are always on the prowl for a good time. They like their drinks heavy and their tricks easy.

Gary should be living it up in his South Tower unit of Metropolis, but he's having a hard time adjusting to his newly single status. It's not easy to walk away from five years with his ex, who he discovered was cheating on him with some North Tower twink. After a night out partying, licking his wounds, he goes to bed alone. When he wakes the next morning, there's a naked guy in his bed. Not just any guy. A stud from North Tower. But hot as he is, what the hell is he doing in his room?

Travis doesn't get why Gary's freaking out. So he went home with Gary's roommate and accidentally crawled into the wrong bed. It's not the first time he's woken up in a strange place. Maybe Gary would loosen up a little if he gave it a try as well. Travis has more important things to deal with though...like his meeting with an investor who could give him the money to start his massage clinic.

They're both sure that's the last time they'll have to deal with each other until a mix-up leads Gary's ex and Travis's investor to think they're an item, which Gary and Travis use to their benefit by posing as a couple around town. Soon, they discover the chemistry between them is off the charts. Travis brings out a sexual confidence Gary didn't know he had - one Travis enjoys exploring with him. But as the two keep up their boyfriend hoax, Gary realizes Travis isn't as shallow as he thought. Gary's starting to develop feelings for him. But Travis doesn't do relationships, and Gary should know better, considering they're just faking it.

Falling in love never easy that's why it's called falling and not soaring or dancing or any othe positive proclaimation but when you see it even in a book it gives you hope. Hope for your own HEA..and that's what this book does. It doesn't pull it's punches it shows heartache with a side of debilitating doubt and then shows you that despite all the obstacles in our way none are greater than the ones we place in our own way. Overcoming the fear and letting someone see us hoping that they do but fearing that they won't is horrible. But for those moments when the veil parts and you get a glimpse at something so magnificent that you have to try even if it costs you everything even if it starts out on a lark..when you find it your soul flies and you realize that if you fall you won't do it alone..that person that see's you falls too and they catch you just as you catch them. That's what this book does and does so well it makes you smile and believe and hope it's a lot to accomplish bilut good writers manage it and make it look easy Devon and Riley do that here.

I love Riley hart books. This was a great listen! I loved the narrator. Can't wait for more books !

a very good and believable story. the dialog was a little to fast. I thought the narrator could have the same feeling without talking in such a hurried tone of voice.

This was a good story. Loved the characters. The narrator is awesome. Trying to download all of audiobooks by Michael Pauley.

I loved this book and the narrator just helped me enjoy it more.
This is a must read...

Really held my interest. Fully developed characters. The authors capture themes true to the struggles we as gay men have with intimacy. helped by a talented and lively narrator, Michael Pauley, who succeeded in distinguishing voices and expressing real emotion. I ordered all his other books as a result.

What a great audio book.

I really enjoyed the story. It was really well written. I can’t wait to listen to Metropolis Book 2.

The person that read the audio book just brought another dimension of realism to it.
He did different characters voices and it didn’t sound weird. He really made the book real.
Kudos to him.

Really enjoyable book that was meaningful.

Faking it was predictable

I really hate these low self esteem characters. Are people really like this??? I just seems fake.

Great book, not a fan of narrator

This was a great book and I loved the characters. I was not a fan of the narrator. I've listened to other books read by Michael Pauley and he's just really awkward during sex scenes. He makes it sound like he's being chased and is extremely scared. Like I should be preparing for a horror scene instead of a sexy BJ. I've read a lot of other reviewers say they loved him but I am not a fan at all. Great story....weird narrating.

Stunning Start to a Series

I have high hopes for this series. Loved this book! The storyline is interesting, the characters are likable, and the narration is perfect. Highly recommend!