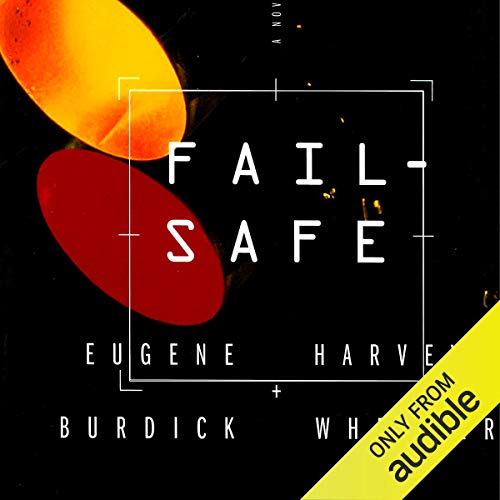 Something has gone wrong. A group of American bombers armed with nuclear weapons is streaking past the fail-safe point, beyond recall, and no one knows why. Their destination - Moscow.

In a bomb shelter beneath the White House, the calm young president turns to his Russian translator and says, "I think we are ready to talk to Premier Kruschchev." Not far away, in the War Room at the Pentagon, the secretary of defense and his aides watch with growing anxiety as the luminous blips crawl across a huge screen map. High over the Bering Strait in a large Vindicator bomber, a colonel stares in disbelief at the attack code number on his fail-safe box and wonders if it could possibly be a mistake.

First published in 1962, when America was still reeling from the Cuban Missile Crisis, Fail-Safe reflects the apocalyptic attitude that pervaded society during the height of the Cold War, when disaster could have struck at any moment. As more countries develop nuclear capabilities and the potential for new enemies lurks on the horizon, Fail-Safe and its powerful issues continue to be relevant.

I love Cold War fiction ever since I read Alas, Babylon. I feel it’s an era I missed out on because I was too young to remember. I’ve taken a chance on lesser known works, some leaving me surprisingly fulfilled, and others that made me actually ask wtf, did the author have to get up and leave the country in the middle of the story?

This book is not great. Not terrible, but not one I’d instantly recommend. It does get my attention at first and I can see the premonition, but further along we are given life history of most characters involved which seems like filler. I began to like the reader’s voice because it had a strange lilt to it.

Until he started speaking in a Russian accent. And when I say Russian, I mean full on French. Not exaggerating at all. I kept waiting for him to say Sacre Bleu! but he never did. Don’t do accents if you can’t. Just don’t.

Otherwise, after the bios are done, we get back to the story and ends in a way that frankly surprised me. Which is good because I hate endings I can see from 1/4 through the book.

All said, it was ok. It wasn’t 13 days or Red October by any stretch, but I held out to the end.

Fail-Safe knocked me for a loop!

If you could sum up Fail-Safe in three words, what would they be?

The president.
I felt a real connection to the character. The way he gathered opinions and used the people he has chosen to make decisions, the readers (or listeners) are privy to knowledge he doesn’t have and yet his actions are bold and startling. I felt at ease with his manners and voice, it exuded confidence and determination.

Have you listened to any of Kevin Kraft’s other performances before? How does this one compare?

Yes. In this instance his reading was more of a performance, not over the top mind you but a steady storytelling and his use of different character voices was great. I listen while driving and I need something interesting to help me stay sharp on the road. It was very enjoyable.

I did laugh out loud when protesters "They burned the book, then apologized to a non-listening public"
But at the end I really wanted MORE, what happens next.

This was the first audio book I listened to that I had not read or seen the movie first, it took me a while to get into the characters with all the set-up required, it was worth it and it may be just the way I am :o)

Would you consider the audio edition of Fail-Safe to be better than the print version?

For me YES. The narrator was terrific and brought the story to 'real' life.

I liked all as they played an important part.

Kevin Kraft has a rich barratone voice with a hint of an accent. One that I loved to listen to.

Would you try another book from Eugene Burdick and Harvey Wheeler and/or Kevin Kraft?

Kevin Kraft took what was an extremely dry topic and infused enthusiasm into the audio presentation.

I was surprised at what the president of the United States did after the unintentional act perpetrated upon Russia.

The ending was my favorite part - really unexpected.

Could you see Fail-Safe being made into a movie or a TV series? Who should the stars be?

No - I think the subject matter may be too dated to be appealing to a contemporary audience.

The narrator did a very good job presenting the different characters. I would definitely listen to another book narrated by Mr. Kraft.

A Peek Into Our Future

During these troubling times in America & Internationally, perhaps it’s best we all revisit this timeless theme of computer error and mutual destruction.

This is the rare case where the movie is far better than the book.

The movie version is a cold war classic. The book has the identical plot details but much more depth of characters. The book allows for discussions of war, accidental war, the abdication of responsibility to machines and other themes. Other than a few anachronistic references the story could be set in modern day. A true gut punch. The narrator does an excellent job bringing to life a wide range of personalities. Highly recommended.

top 5 books of all time, never get tired of it. Great way to enjoy it while driving

What a great book. Harkens back to the times of ethics and values in politics. Well-written. Apocalyptic. Devastating

This is one of my 'keeper' books, the ones I periodically re-read; this was a GREAT audio rendition of the novel ... brought tears to my eyes at the end. Thanks, Kevin Kraft, for a magnificent reading.