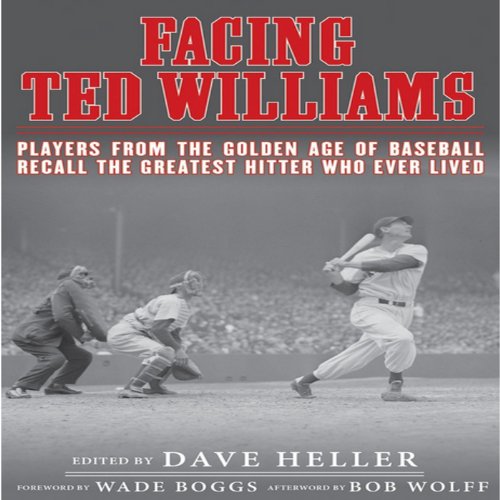 Ted Williams is considered one of the best hitters in baseball history, but no one knows the pressure of facing off against greatness better than the players who shared the field with him. Dave Heller interviews dozens of these players, and cleverly structures his book in four different sections - Pitchers, Catchers, Infielders, and Outfielders - to get varying perspectives, by position, on Williams. The interviews are ably portrayed by Dylan Lynch, who gives each remembrance a personal, conversational quality, as if the stories by the likes of Don Larsen and Bobby Feller are being told directly to the listener.

Relive the mystique of the purest hitter to ever play the game.

"The Splendid Splinter", "Teddy Ballgame", "The Kid" - no matter the nickname, Ted Williams was one of the most accomplished hitters in baseball history. He was the last man to hit .400 in a single season, a 19-time All-Star, a two-time American League MVP, a two-time winner of the Triple Crown, and an inductee into the National Baseball Hall of Fame in 1966...all while serving his country in World War II and the Korean War. Far from a conventional biography, Facing Ted Williams aims to offer a different perspective with testimonials from teammates and opponents alike, on how Williams was regarded among his peers. See Ted Williams through the eyes of pitchers struggling to put a fastball past his bat, the infielders and outfielders adjusting their positions in the hopes that they can fill the hole where a frozen rope might land, and the catchers strategizing a Williams at-bat, pitch-by-pitch.

Whether you’re a Red Sox fanatic, a casual baseball fan, or perhaps just an admirer of the fabled war hero and slugger, this book is sure to be a fresh and compelling look at this classic baseball icon. Much like Williams himself, Facing Ted Williams is sure to be a home run for all walks of baseball fandom.

For fans of Ted Williams

If you are a Ted Williams fan you might rate this higher. The book looks at various pitchers' experiences of pitching to Ted Williams, the self-proclaimed greatest hitter of all time (not without some cause and an infinitely more valid claim than Donald Trump's to be the greatest president since Abe Lincoln). Unfortunately the book is based on recent interviews with William's opponents but, since Williams' career spanned 4 decades, many of the pitchers who faced Williams most frequently were 'unavailable'. Several of the pitchers interviewed faced Williams only a few times and well passed his peak. Why include a pitcher who only faced Williams once? The book is complete in that it includes details of EVERY at bat by Williams vs. the pitcher interviewed and Ted's overall stats against the pitcher in question. This would likely be more interesting in book form. Listening to a list of at bats and statistics read out-loud is hard to follow even for the most avid fan.