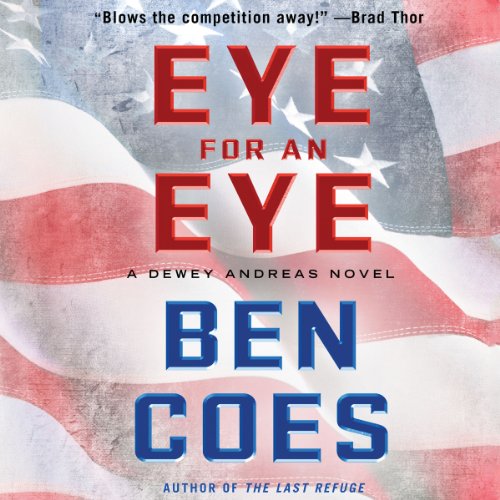 Eye for an Eye

In Ben Coes' latest, Eye for an Eye, Dewey Andreas faces the toughest odds of his life as one of China's most powerful men has decided to do whatever he must to take down Dewey - and inflicts a horrifying loss.

When Dewey uncovers the identity of a mole embedded at a high level in Israel’s Mossad, it triggers a larger, more dangerous plot. The mole was the most important asset of Chinese Intelligence, and Fao Bhang, head of China’s Ministry of State Security (MSS), responds to the discovery and brutal elimination of the mole, by immediately placing a kill order on the man responsible - Dewey Andreas.

Once he learns who is probably behind the attack - and why they are after him - Dewey goes rogue, using all of his assets and skills to launch a counterattack. Andreas must now face the full weight and might of the MSS, Chinese Intelligence, and the formidable Fao Bhang, if he’s to achieve his one last goal: revenge on a biblical scale, no matter the odds or the armies that he will have to fight his way through.

Andreas - former Army Ranger and Delta - is a man of great skills and cunning. His opponent, Fao Bhang, is ruthless, determined, and with no limit to the assets at his disposal. In this conflict, there are only two possible outcomes. And only one Dewey Andreas.

Tops of the Dewey Andreas series so far!

I love thrillers and this one is about as good as it gets. A kill order on Dewey sets in motion a series of events which cause Dewey to go rogue looking for those responsible. This is one of those listens you won't easily be able to put down. Highly recommend.

The Dewey Andreas series follows the same plot line and general tenor of Brad Thor's Scott Harvath series. The hero never gets shot even though he waltzes through a hail of bullets, and everyone else gets killed. I can deal with this; it is not as real as for example Steven Hunter's excellent Bob Lee Swagger series, but it is good for quick entertainment.

Ordinarily I would have given this book a 4 for story as it was predictable and didn't keep me guessing, but was otherwise an enjoyable read. But I had to take it down a notch for the way the novel was resolved. While the approach was indeed novel, it so strained the suspension of disbelief as to be difficult to swallow. Without revealing the ending, I would say it was like having the tooth fairy intervene. It just was not tethered to the way the world really works.

But if you like Harvath, Mitch Rapp, and that kind of super-agent-hero, then you'll be right at home in this book. It is worth your time for the voice characterizations alone. It was a great performance by the reader.

Now this is a Super Hero

What made the experience of listening to Eye for an Eye the most enjoyable?

This is Very fast paced. Somewhat predictable at times but very enjoyable nonetheless.

What was one of the most memorable moments of Eye for an Eye?

*Spoiler*. When Dewey's fiancé is murdered. I was expecting it to happen as the story was building up to this happening. With their wonderful and romantic day together, the listener just knows it's not in the cards for Dewey to live happily ever after.

This is such s good series. Very well written with very detailed plots that are often intricate and complicated. Dewey can be a little unrealistic at times with his consistent narrow escapes. However, this is fiction and should be viewed as such, if the listener wants reality a history book would suffice.

In a recent review of Brad Thor's first Scott Harvath novel I wrote the following: "Since Vince Flynn died, I can no longer select a single favorite living action thriller series writer. The group at the top includes Brad Thor, Daniel Silva, Mark Greaney, Nelson DeMille, Adrian McKinty, Brad Taylor, David Baldacci, Lee Child, Brett Battles, Dalton Fury, and Mark Dawson in no special order." I forgot to include Ben Coes on the list! Coes has written only 5 novels, but each one has been outstanding.

An Eye for an Eye is novel 4 in the great five novel Dewey Andreas series. Every one of Coes' novels deserves more than five stars.

What did you love best about Eye for an Eye?

I've read all the books in the dewey andreas series and absolutely love them. I put this series right up there with mitch rapp. I can't say enough. suspense. action. ex delta operator. its got it all. can't wait for the next one. they get better and better each time, never waivering from the essence of the hero, dewey andreas.

Dewey Andreas might be along the lines of the Harvath or Rapp characters, but if one is going to read these type of characters one expects them to be a larger portion of these books. There is too much talk and not enough action in all of these. Some were hard not to stop listening to, just waiting for Andreas to even show up.

Ben Coes is the top dog in the espionage terrorism genre right now. Dewey Andreas is as bad as they come. If the country is in trouble better call Dewey. Just don't let him care about you. Great books. Every one is fantastic.

Best Coes Yet, Narration was Outstanding

The story was the most intricate and involved of all the Coes books, involving a healthy dose of Brits, Chinese and US characters. The narration was very nuanced and full, bringing the characters to life before your ears, with full personalities and excellent differentiation.

The story? Dewey is a compelling hero, but (like all such heroes) you're going to have to suspend disbelief quite a few times. How many times can you be shot at by machine gun toting pros and not get hit? And the mechanism used near the end to get Dewey close to the protagonist strains credibility; one of the least likely strategies ever formulated.

But somehow, it all works.The characters are personable and likeable, the story serviceable and the narration just top notch. You'll enjoy yourself so much that you'll just shrug off any deficits and you'll be sad (like I was) that the story had to end.

If you're unfamiliar with Dewey, where does he fit in in the action hero continuum? Let's assume Jack Reacher is kind of ground zero, super but not superman. Throw Gabriel Allon a bit to his left; even more realistic. At the far right extreme (no political connotation meant) is Mitch Rapp, gone before his time, enjoyable, but not always believable. Scott Harvath is between Reacher and Rapp,

Dewey is probably on the far side of Harvath, but nowhere close to Rapp. He's more human, more likable, has more personality. No criticism meant, they're all enjoyable, and I've read or listened to every book in all the series. But hopefully, this will help folks unfamiliar with Coes/Dewey understand what they're in for.

If you like this general genre, you'll love the book.

Plots are real, performance is good and the story moves, Great series, set in today's environment of tension and politics. Good guys and bad guys on both sides, one hero.

This episode of superman Dewey Andreas brings Dewey into some terrible experiences that change his life. Can't say more..I don't write spoilers into reviews...just say that some of the well known and, for me, most liked characters in the series don't make it thru this novel.

Ben Coes continue to write Dewey larger than life and more that real. After 4 books I'm ready for a break, even though theres just one more to go.

Peter Hermann continues to voice the characters with excellence and verve.

This is one of the best terrorist vs U.S.Hero series I've listened to. Ranks with Brad Thor, Lee Child, Barry Eisler et al.

You know you'll buy it if you've listened to and enjoyed the earlier books in the series. I'm hoping Ben Coes will write more of his up-to-date style of novels.