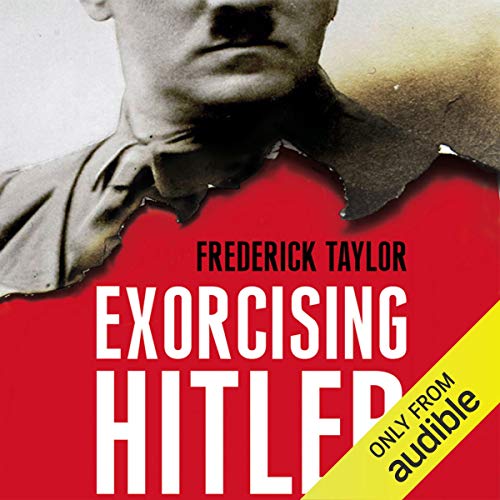 In Exorcising Hitler, Frederick Taylor tells the story of Germany's year zero and what came after. Not since the end of the Roman Empire, almost 1500 years earlier, is there a parallel, in Europe at least, to the fall of the German nation in 1945.

As Taylor describes the final Allied campaign, the hunting down of the Nazi resistance, the vast displacement of peoples in central and eastern Europe, the attitudes of the conquerors, the competition between Soviet Russia and the West, the hunger and near starvation of a once proud people, the initially naive attempt at expunging Nazism from all aspects of German life and the later more pragmatic approach, we begin to understand that despite almost total destruction, a combination of conservatism, enterprise and pragmatism in relation to former Nazis enabled the economic miracle of the 1950s. And we see how it was only when the '60s generation (the children of the Nazi era) began to question their parents with increasing violence that Germany began to awake from its sleep cure.

"Essential reading for anyone who is interested in the Nazis and wants to know what happened next." (Richard Evans, New Statesman)

Into a conquered nation

What are the rights and responsibilities of conquering nations toward a defeated enemy? Are there rules which apply, or does anything go? Do those who supported the former regime by complicity carry a responsibility similar to that of the leaders? Should they be held to account and be punished, and if so, how? How might a victor's actions bear upon the future of vanquished people?

These are some of the vexed questions the Allies faced at the end of World War II.

The problem began with surrender itself: "With the end of the war, Germany was deemed to have ceased to exist." And yet, with or without a state, its people did continue to exist, with a multitude of problems, crises, and divergent opinions. While some considered defeat a "liberation," remnants of guerilla opposition from the Volkssturm and Werwolf organizations held out to the bitter end. With multiple allies invading the former Third Reich, each of whom had their own approaches and agendas, how could sense be made of the situation?

Frederick Taylor attempts, sometimes successfully, sometime less so, to give us a clearer picture of the entangled circumstances of postwar Germany. I found parts of it extremely painful to read, and in my opinion, the book raises as many questions as it answers. It is provocative, compelling, and a great springboard for discussion for those interested in the history of warfare, law, and politics.

It is, as expected, an Allied perspective so anyone looking for a more intensive look at the German people's experience will need additional sources. Overall it is a useful and instructive look at a time which has not been given the attention it deserves, and for that it is worth careful consideration.

Matt Bates was a good choice of narrator as his reading is well-paced, clearly enunciated, and his pronunciation of German more than competent.

Yes, he doesn't simply read quotations; he tries to imitate the person's native accent, making all Americans sound like country bumpkins in the process.

What made the experience of listening to Exorcising Hitler the most enjoyable?

The narration. No matter how well versed you are in the subject area even the best non fiction of this kind can get a little dry at times, but the excellent narration kept things flowing.

What other book might you compare Exorcising Hitler to and why?

Endgame by David Stafford, Germany 1945 by Richard Bessel come immediately to mind. This is easily my favourite.

Have you listened to any of Matt Bates’s other performances before? How does this one compare?

I haven't listened to anything by this narrator before. I did appreciate that unlike a lot of narration for this genre Matt Bates' performance never felt or sounded condescending. For some reason some of the best books of this kind are narrated in a stilted, stuffy way that distracts from the material.

One of the best books of this kind available on audible. Highly recommended.

If you were a war historian, this book is very interesting. Full of details, sometimes too many, but paints the most realistic picture of post-war Germany and how it’s citizens were treated by the allies of any book I’ve read thus far.

Informative, but not a happy story.

This is a good examination of the initial years of the occupation of Germany after WWII, and is best when describing the events and issues faced in that period. I am very glad to have heard it, as it addresses an issue we seldom see addressed. The reader was very good.