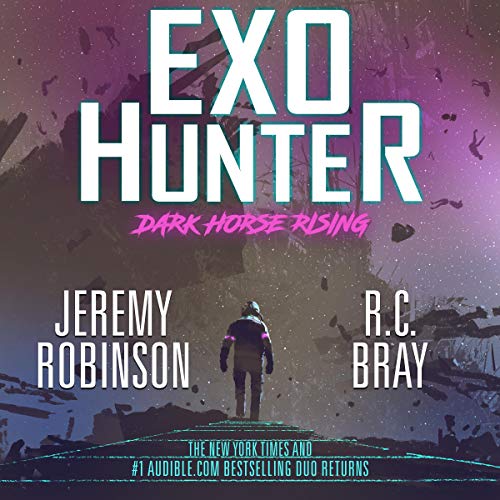 Callsign: Dark Horse and his Marine Rapid Reaction Force team have been sent to recover a strange artifact near Antarctica’s Soviet-controlled Vostok Station. Confronted by a team of Ruskie Spetsnaz, a battle for control of the strange device, frozen in the ice, breaks out. But before anyone can claim victory, or the prize, an explosion of white light knocks the combatants unconscious and whisks them away to...

One thousand years later. Dark Horse, along with his teammate, Chuy, and one of the Soviets, Drago, finds himself in a future that is both impressive and horrifying. Humanity has left Earth behind and is rapidly expanding throughout the galaxy under the banner of The Union, a white supremacist government who racially ‘purified’ the human race hundreds of years in the past.

Living on the fringe of this twisted Fourth Reich society, Dark Horse - the only Black man in the Union - commandeers a vessel and scours the galaxy for his missing teammates under the guise of an Exo-Hunter, seeking out exo-planets to satiate the Union’s need for colonization. His search takes him beyond the edge of the known universe and into an interplanetary war, guided by a vast intelligence that’s been waiting for Dark Horse’s arrival - for a thousand years.

New York Times and number-one Audible.com best-selling author Jeremy Robinson takes readers on a journey to a dark and twisted future…and makes them laugh. Exo-Hunter is a lighthearted homage to 1980s science fiction movies that also looks at the dangers of white supremacy and the core values that makes it dangerous and the butt of the joke. In the audiobook edition, he is joined by number-one Audible best-selling narrator, R.C. Bray, giving listeners the most compelling - and most fun - thing to come out of 2020.

Get this book! just do yourself a favor and pull the trigger now and get it. this is the best story I've listened to in awhile, and I listen to most all of the Robinson/Bray titles. I won't spoil it, I'll just say there's never a dull moment, the characters are full of life, the continuity of the story flows seamlessly without flaw all the way to the end. did I say get this book? get it!

it seems this book is just one long racist rant about how white people ruined the galaxy. I'm done listening to how evil American white people killed off all non white people on the entire planet.

the book had potential but the racist rants ruined it for me.

This book was terrible. I’ll fully admit, I’m one of those that reads the reviews and never leaves a review. Starting with this terrible book, I’m going to start leaving reviews. Maybe others will be saved from wasting their time with this book.

Love R.C. Bray. His performance was great, as always.

This book was lacking in excitement and the story was weak. Character development was non-existent. I felt really duped when I got to the end and even said “are you kidding me” out loud. It felt like environmental propaganda.

Another great series from a master storyteller!

I initially bought this because of the awesome author/narrator combo, as well as the length you get for 1 credit. This did not disappoint! RC Bray was phenomenal per usual, and the story was a great new addition to my library.

Awful. only listened a few minutes

one team member says, "do some keigels to keep warm, princess." need I say more? like reading a story written by a high school football team.

I liked his other books, Infinite, and it’s sequel. I also liked NPC. This book had the sci-fi appeal, but seemed more like a virtue signaling, left leaning narrative intent on further demonizing white people, with the implication that very few white people are genuinely good people. R.C. Bray did a good job, as usual, but the pandering that seemed to form the theme of the entire story detracted from its entertainment value immensely, not to mention the fact that Robinson apparently doesn’t understand how different shades of humans emerge, which kind of nullifies the entire plan his imagined Fourth Reich pulls off.

This was my first audiobook, and it did not disappoint I have read a lot of Jeremy Robinson‘s books my favorite being the last hunter series. The narration by R.C.Bray was excellent as well as the story. Exo-Hunter Was fast paced and at times had me laughing. I can’t wait for the sequel!

I feel like this book was already written and then a panel of people looking to cash in on 2020 headlines came afterwards and added a bunch of key buzzwords to a story that didn't need it.
I mean seriously I just started getting into the story and then... tada... racism, sexism, pandemic pops up and I have to suffer through a paragraph of that before it goes back to them story.
I listen to books to relax, not too get preached too...

should have been epic...

question: someone asks you for directions, you tell them how to get to where they are looking for. later you find out they killed everyone there. who is responsible? you or them?
If you think they are innocent and it's all your fault then you might enjoy this book. that is if you also laugh while your best friend is being eaten alive.
there is a good story here but the author tries so very hard to make it cool it gets trampled.

If you like woke BS, this is for you.

This story started very well and then it slid into woke BS. It would have been a great story and being from the 80's.Turned out to be a sad disappointment.