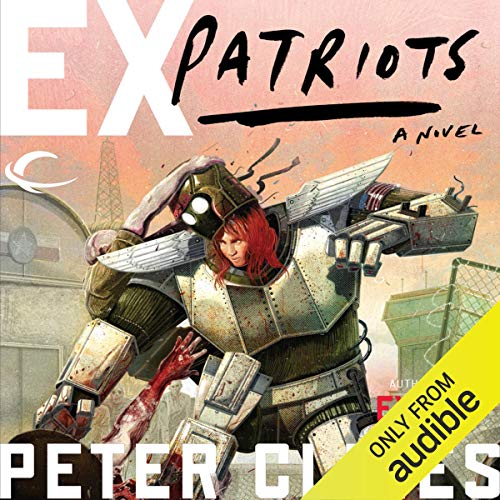 It’s been two years since the world ended. Two years since the dead rose and the plague of ex-humanity decimated mankind. For most of that time, the superhero called St. George, formerly known to the world as the Mighty Dragon, has protected the people of Los Angeles at their film-studio-turned-fortress, The Mount. Together with his fellow heroes - Cerberus, Zzzap, and Stealth - he’s tried to give the survivors hope and something like a real life. But the swollen population of The Mount is becoming harder and harder to sustain, and the heroes are feeling the pressure.

Hope arrives in the form of a United States Army battalion, based in a complex a few hundred miles away in Arizona. This is not just any base, however. The men and women of Project Krypton are super-soldiers, designed and created before the outbreak to be better, stronger, and faster than normal humans. They want the heroes and all the people of The Mount to rejoin America and have normal lives again.

But can the military be trusted? And is there even a country left to rejoin? There is a secret at the heart of Project Krypton, and those behind it have an awesome power that will help them keep that secret hidden. The power of Freedom.

"Anyone who says there's nothing new in the world of zombie fiction hasn't read Peter Clines. Ex-Patriots is even better than its predecessor. This is a series that's going places." (Mira Grant, author of Feed and Deadline)

Better Than The First!!!

Very good continuation... Better than the first book... narration was great I actually enjoyed the multiple narrators... Can not wait to start the next book... If you like zombies and you like Heroes this is definitely the series you need to read...I am a fan of Peter Clines

At one point, Barry says something in this story about the military being evil in any zombie Apocalypse story and he was right. Going into this story, I didn't know what to expect because I felt like it could have ended with first story. But their involvement with the military/ government added an extra dimension to a very complex idea. First it was zombies v. superheros. Now on top of that we have a corrupt "government" and genetically enhanced soldiers to contend with. I'm not going to ruin the ending, but I was definitely caught off guard. Also, the characters are very well written with interesting backstories. It was exciting, surprising, funny, complex.... I could go on, and on about how awesome this series is.

Regarding my recent review of Cline's "Ex-Heroes," the first novel in this on-the-mark series, I state:

"Clines, who's given us his enjoyable and unpredictable '14' and his recent smaller but worthy "Quatrain" audiobook, just keeps giving us good reading and listening, period."

You're going to have to crack open that dusty old wallet, brush away the cobwebs, pull out that precious Audible credit, and get this audiobook!

Look, it's hard enough these days to find a great (or even just good) zombie writer with something to say, and say it well. Clines did it right in "Ex-Heroes,", and in "Ex-Patriots," he's done it again. A great new premise upon an already solid world built by the author, page-turning dialogue goodness, new rich characterization, and an honest-to-god story to tell.

Do the math. Clines has mixed the genres perfectly, and knocked it out of the park yet again. It's an awesome listen.

I'm keeping this one mercifully short. Stop reading this review, and go get "Ex-Patriots."

The superheroes+zombies mashup gets a little bette

This is definitely popcorn entertainment. Superheroes + zombies: it's a novelized comic book, and it reads like one. I thought the first book (Ex-Heroes) was pretty cheesy and mediocre if enjoyable. The second book is also cheesy, maybe just a notch above mediocre. Clines's writing has improved in this sequel, and it particularly shows in the plotting. Instead of a dumb boss fight with a predictable conclusion at the end, there are several fairly clever (if very much conforming to standard superhero tropes) twists, some of which made things that initially had me rolling my eyes suddenly become more credible. The battle at the end is more complex and has more factions and is left a little bit inconclusive (well, in typical genre fashion, you can't ever have a villain decisively killed).

In Ex-Heroes, we were introduced to a gang of superheroes who were defending "The Mount," a fortress inside what was once Paramount Studios in Hollywood, where human survivors have barricaded themselves against the zombie hordes that have overrun the world. In this second book in what is obviously meant to be an ongoing series, we're introduced to a group of "super soldiers" who were engineered by the U.S. Army just before everything went to apocalypse. Led by "Captain Freedom" (yeah, yeah), they discover the Mount when they fly a predator drone overhead. The heroes send out Zzzap, their energy form hero, and soon the superheroes are meeting the super-soldiers, there is the obligatory initial misunderstanding leading to a completely unnecessary hero battle, followed by the two groups deciding to join together, followed by the discovery of sinister secrets, a hidden bad guy, a returning foe, and more "killing dead zombie celebrity" jokes.

I gave the first book 3 stars; I give this one 3.5. I don't think Peter Clines is going to be putting out anything really fantastically well-written or brilliant, but although falling a bit below my usual quality threshold for series I want to keep following, I have enjoyed both books enough that I will probably snap up the next book when it's released. This is very much hardcore zombie-superhero-nerd fantasy, but if that hits your sweet spot, take the time to enjoy the unabashed enthusiastic genre love here.

Very good voice acting here, and with such a large cast, I appreciated having male and female voices to handle different characters.

I actually enjoyed the second book much more than the first. I thought the concept of super heroes and zombies a little different, but somehow this author managed to bring it all together. Not for everyone, however if you are into the zombie genre I would be that you'll at least enjoy that part of the story line.

This sequel is great. Throughout the book they even point out how cliche this plot line is, but that doesn't matter; the character interaction, the witty build up of jokes, and the just freaky nature of ex's, compel you to listen to more. By the end you are rooting for the heroes and drooling for more, hoping Clines makes this into a Trilogy, if not more. The separation of readers, while in most books breaks up the flow, in this book, really helps drive the character development, and I applaud the talent for being able to do so. If you like comic book heroes, buy this, and the first book and take a listen, you wont be disappointed.

Another great book for zombie fans.

Absolutely. Although some of the plot was a little far-fetched with super heros AND a zombie appocolypse but it certainly made for an interesting twist in the story. The character parts are all well narrated. This bookcontains an especially good cast of narrators.

What other book might you compare Ex-Patriots to and why?

It goes along with Ex-Heros which was a great listen as well. I'd compare it to Day by Day Armageddon and Beyond Excile, which is the sequel to Day by Day.

Which character ??? as performed by Jay Snyder and Khristine Hvam ??? was your favorite?

Definetely Stealth, narrated by Khristine Hvam. Stealth is a great character and Khristine absolutely does her justice, along with all the other female parts. But St. George isn't bad either. Jay Snyder has a wonderful story-telling voice. I could listen to him for hours. Let's not forget to mention Khristine's Cerberous character. I loved that a woman actually played an armored warrior, where it's usually the man who fulfills this role.

I was at first but wow... it really kicked off.

Where does Ex-Patriots rank among all the audiobooks you’ve listened to so far?

Right under the first one. Ex Heroes. I don't think the series will ever top that. Super close though.

What other book might you compare Ex-Patriots to and why?

Obviously Ex Heroes. Same series. EXCELLENT establishment of this world while being its own amazing story.

They were all perfect. They got the tone exactly right. I like that it was a team of people instead of one guy. The main narrator was great though.

The part where it all came together. All the flash backs, tension and mystery. They all just hit you all at once. I actually cursed out loud.

I was really worried. The first book felt so complete and perfect as it was. I regretted it right up to when the story kicked off. This enhanced the story because i was apprehensive and then TOTALLY caught off guard. Awesome writing.

I really enjoyed this book. Nice addition to the Ex-Heroes book.
I liked the writing and naration.

2nd better than the first and the first one rocked

I was hoping for a 2nd book after buying "Ex-Heros".

Have to say the second book is better than the first.
Audio production is great and the story takes my loved Heros into what could be a cliche' ridden direction, but instead it takes all I love about heros and zombies and gives them both a great new lease on life. It was awesome.

I may sound like a fool but after hard syfi, history, and bios,... this is all just great fun for me
I have listened to these books several times and keep enjoying them. Give this one a try. It stands alone if you have not read the first but if you hear this on you will have to read the first.