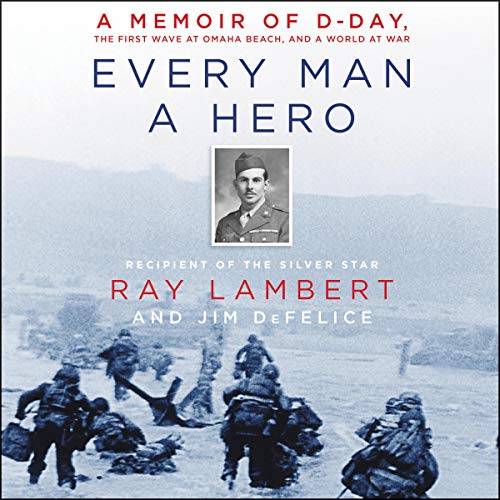 Every Man a Hero

An extraordinary and unforgettable new firsthand account of D-Day.

Seventy-five years ago, he hit Omaha Beach with the first wave. Now, Ray Lambert, 98 years old, delivers one of the most remarkable memoirs of our time, a tour de force of remembrance evoking his role as a decorated World War II medic who risked his life to save the heroes of D-Day.

At five a.m. on June 6, 1944, US Army Staff Sergeant Ray Lambert worked his way through a throng of nervous soldiers to a windswept deck on a troopship off the coast of Normandy, France. A familiar voice cut through the wind and rumble of the ship’s engines. “Ray!” called his brother, Bill. Ray, head of a medical team for the First Division’s famed 16th Infantry Regiment, had already won a silver star in 1943 for running through German lines to rescue trapped men, one of countless rescues he’d made in North Africa and Sicily.

“This is going to be the worst yet,” Ray told his brother, who served alongside him throughout the war.

“I will,” said Ray. He thought about his wife and son - a boy he had yet to see. “Same for me.” The words were barely out of Ray’s mouth when a shout came from below.

To the landing craft!

The brothers parted. Their destinies lay 10 miles away, on the bloodiest shore of Normandy, a plot of Omaha Beach ironically code-named “Easy Red”.

Less than five hours later, after saving dozens of lives and being wounded at least three separate times, Ray would lose consciousness in the shallow water of the beach under heavy fire. He would wake on the deck of a landing ship to find his battered brother clinging to life next to him.

Every Man a Hero is the unforgettable story not only of what happened in the incredible and desperate hours on Omaha Beach, but of the bravery and courage that preceded them, throughout the Second World War - from the sands of Africa, through the treacherous mountain passes of Sicily, and beyond to the greatest military victory the world has ever known.

Brilliant! Only one flaw...

A vivid and exciting memoir! The only thing I didn’t like about it was the way the narrator kept mangling the nickname of the division. It’s the Big-Red-ONE (like the number one). It’s NOT the big Redwhun (like one among many). Narrator prep is important... Annoying quirk of an otherwise compelling read.

Not just a history of Omaha Beach or WW 2

This is an exceptional history of the 1st Infantry Division (Big Red One) from an individual medic's point of view. This is an influential book and story that I hope my sons, daughters, grandsons and granddaughters will read. However, it is much more. One surprise for me in this book was how Ray's description of his family and how he was raised resonated with my recollections of my father. It gave me a fresh look into him and his experiences (USMC Corpsman at Guadalcanal). The experiences that Ray relates here helped me understand my father better. This book is well researched and documented. Because of it, I am reading more history of the Big Red One.

From one author to another, this book is superbly written. A true American hero. God Bless you, Mr. Lambert.

I am always on the lookout for personal accounts of anyone who was in active battles in the European sector in WWII, from any participant from any country involved.
This is as good as any I have found.
I’m not sure how I found it, but am so pleased that I did..

The book is a wonderful story to read anytime but especially powerful to have in my mind just as I was visiting the sites at Normandy. The story is beautiful and the appendix details are worth listening to also.

A Definition of a Hero

A real look into one mans war and every mans war. As a Vietnam Vet I feel he speaks for all that have been in harms way.

WW2 through the eyes of a medic!

This is a fantastic journal of a medic’s experience in WW2.

WARNING: I cried many times as I read Ray Lambert’s inspirational words, as he suffered the death of friends and nearly died himself.

As a veteran, I found many parts of Ray's story deeply moving. As an American, I loved hearing all of it. If more Americans took the time to understand the sacrifices made for their freedoms -- sacrifices like those described in this excellent book -- our nation probably wouldn't be in such a dismal state right now.

Hands down, one of the finest books on WW II and DDay. The reader was off the charts pitch perfect in tone, intonation, emotion, timing. It felt like the author was whispering in my ear for the entire book.

I don't know how the story could have been better or better told.

If you want to transport yourself back in time to realize what life was like back then, this is your book.

Everyone should read this book. Google this man and watch an interview . He is amazing at 98.

Great story and remembrance of life during WW2.

I could only imagine the amount of balls it took to run into Nazi machine gun fire on the beach. I Love our most badass generation!

Thank you to all whom served and who will be serving in the future.