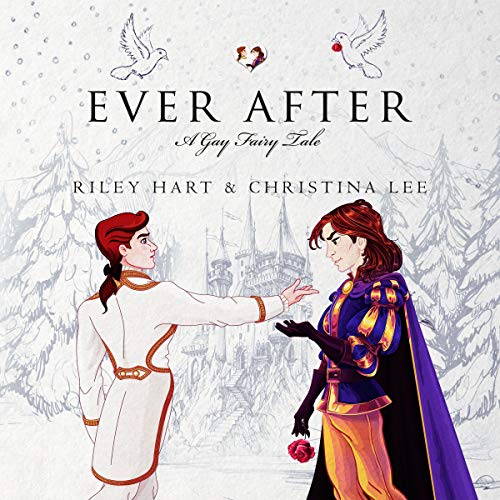 As next in line for the Evergreen crown, Prince Merrick Davendall’s future involves ruling, marriage, and producing an heir of his own. But he’s long been tormented by desires that are far from princely. Especially when the beautiful Cassius is promoted to be his new valet, and Merrick is struck by a longing like never before - a longing to know him far beyond royal and servant.

After his father’s passing, Cassius Havendale’s sole duty is to provide for his family. A promotion to serve a pampered prince is something he endures only for their sake. Surely Prince Merrick has no understanding of the true suffering of the common people, nor could he possibly understand what it’s like to desperately desire something he cannot have.

Except the prince is not at all what Cassius imagined. Kind, humorous, and caring to those in need, he also shares Cassius’s affinity for the arts. In fact, Merrick understands his deepest vulnerabilities in a most remarkable way.

As their affection deepens, the underlying tension between them becomes unbearable and they’re unable to ignore it any longer. But when the queen prepares a lavish ball with all the eligible ladies in the land in attendance, Merrick must fulfill his obligations to his country, and Cassius has the needs of his family to consider. They’ve long known their stolen moments would have to come to an end, but are they ready to give up one another and the idea of a happily-ever-after?

Please note: Ever After is a romantic fairy tale - minus the magic - that features one compassionate prince, one brooding valet, and plenty of angsty, forbidden love. It’s loosely based on a certain treasured fairy tale in a wintery make-believe setting that wouldn’t be considered contemporary but also isn’t based on any specific time period and doesn’t play by any traditional rules.

Ever After: Adorable and Infuriating

EVER AFTER is a story about a prince and heir to a throne who falls in love with a commoner. That's a story that's been told in fiction and in real life many a time. The added difficulty here, of course, is that the commoner is a man, which makes the romance doubly potentially treacherous for both characters.
Cassius, the commoner, and Merrick, the prince, are lovely, kind, good-hearted guys; there's no doubt you'll love them and root for their happiness, and, as performed by the ever-fabulous Joel Leslie, the story is almost an unmitigated delight.
The infuriation came for me about 1/3 into the tale, after the two become romantically involved, and... then there was one chapter after another of torturous angst, thwarted longing, and fatalistic sighs of "this could never be" and "they would have to content themselves with this one perfect night" and "only memories they would cherish forever", for the prince must do his duty and marry someone who can produce an heir. Meanwhile, I'm over here shouting, "Dude! Have you never heard of Edward VIII and Wallis Simpson? Just abdicate already!"
If this story had been pared down to a shorter novel, or even a novella, lost several unnecessary secondary characters, and streamlined the plot, it would have been magical and perfect. As it is, it's mostly lovely, with some real tedium in the middle.

Anyway, Ever After is a fantasy without the magic, a sweet fairytale, slow burn romance about the forbidden love between a prince and his valet that takes place in an interesting amalgam of traditional and modern (with formal language and some modern conveniences like cars).

Joel Leslie uses his best accents to bring the characters and the world to life. His pacing is good, his character voices distinct, and he provides emotional context to Merrick and Cassius’s plight.

I enjoyed the narration, but found myself frustrated with the story’s pace at times. Though, the last couple of hours really grabbed my attention and kept me riveted.

Recommended for those looking for an escape with great character and relationship development, a slow burn, and a very happy ending.

It is a great love story. It made me cry, laugh, and it was amazing

So lovely and sweet!!!

I thought I was too old for fairy tales. I'm so glad to discover I'm not. This was such a lovely story! Rediscover the magic of fairy tales just as I did. You owe it to your heart to read this audiobook. To Riley Hart and Christina Lee, thanks so very much for this wonderful listen.

Delicious food for the romantic in even the most broken of hearted. Joel Leslie is the best narrator ever.

i truly enjoyed this! just the right amount of everything. looking forward to the next work.

This is a great take on the People in impossible social circumstances romance. in this case it's a fairly contemporary take on the LGBT royalty issue and it feels realistic enough without being a truly heartbreaking depiction of who these things always go down irl. great voice acting really gives HEAT and passion. it's a keeper and a good comfort book!

One of the best gay romance novels I’ve listened to here. Love has no boundaries.

This is an enjoyable listen with another outstanding narration from Joel Leslie. Nothing too heavy but a light romance with a few twists and turns.

Great story with only a few hang ups

I want to start off by saying that I loved this story. I loved merrick and Cassius and the tension was very good. My only point of contention was the world building. Now it does say in the beginning that this is a world of the authors own creation and I respect that. But it was rather jarring to have some modern things but then some older things that seemed to clash with one another. But over all I loved this book!