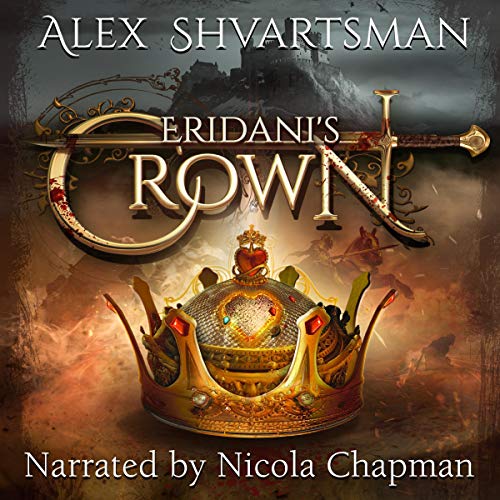 Cursed by Prophecy. Corrupted by Power.

When Eridani's parents are murdered and their kingdom is seized by a traitorous duke, she plans to run. After she suffers yet another unendurable loss, the lure of revenge pulls her back.

Eridani's brilliance as a strategist offers her a path to vengeance and the throne, but success may mean becoming everything she hates. To survive, she must sway religious zealots, outwit ambitious politicians, and confront bloodthirsty warlords, all with few allies and fewer resources. Yet the most menacing obstacle she must overcome is the prophecy uttered by a powerful sorceress:

Everyone you know and trust will come to betray you.

"With a world as intricate as the titular magical artifact and a cast of characters as morally complex as figures from real history, Eridani’s Crown is a nuanced examination of the drive to acquire power and its distorting influence on our ideals. This epic fantasy will have you turning the pages deep into the night and move you in the manner only the grandest of tragedies can." (Ken Liu, Hugo Award-winning author of The Grace of Kings)

"Full of complicated characters and moral ambiguity, Eridani's Crown is a fascinating and haunting exploration of one woman's quest for power. Shvartsman gives us a compelling and nuanced look at the tragedy of Eridani's success that will keep you riveted." (Tina Connolly, Hugo Award-nominated author of Ironskin)

A fantasy coming of age story

“Eridani's Crown” is an epic coming of age fantasy story centered upon revenge and the desire to make things right. The tale is authored by Alex Shvartsman who has a few other audiobooks currently available on Audible. The audiobook edition is rather well narrated by Nicola Chapman even though it appears this is his first audiobook narration. If you are a person who enjoys traditional fantasy stories with a few additional twists and some complex characters, you may want to give this book a listen.

The initial opening to the story was packed with action and intrigue. Right away you are thrown into an action-packed situation and your mind begins asking questions like: Who is this person? Why is this happening to them? Along with others. However, I found the story a bit slow, once this opening scene was complete, as the author used this as an opportunity to build up the various plots and characters. As the world was being built, I found that the author used many of the standard stereotypical fantasy genre tropes. Yet, I found the early lack of magic or magical powers a bit of a surprise. We are presented with the favorite role-playing game (RPG) scenario where the royal parents are murdered by what appears to be a trusted individual and our main character needs to hide away to save not only the title of the crown but her life as well.

What complicates or diverges from traditional fantasy stories is that our main character is a young lady who is not afraid do anything to regain her right to the crown. Her desire throughout the story is to claim her rightful position while seeking revenge against those who killed her parents and would rather see her dead as well. Unlike with princess fairytale stories, the author takes this book in a slightly different direction. The main character attempts to build an army from the common folk, yet none of the men would think of follow the direction of a woman; even less a lady that is so young. So, not giving up, she bands together a group of ladies who willingly to take on this foe even if the men will not. Things start off with minor wins and grows into much more over time as more and more allies are won over to her side.

This really is a coming of age story where revenge is the key motivator of our main character. What I found interesting was seeing her desire and level of revenge grow rapidly as she herself grows. Someone who is rather timid at the beginning of the story grows into someone who is not shy to kill massive numbers of people who get in her way. I liked that the author included a number of flashbacks as the story progressed, giving you a better understanding of what drove our character to who she is now. Even with all of this, I wanted to know more and better understand her action; which at time seemed out of character. I found the many situations she found herself in interesting along with the various ways she had to work getting out of them. Not everything is solved by violence as she will discover.

The audiobook’s narration was overall professionally done. The characters were given unique voices and personalities which were maintained throughout the book. I do not recall any major issues with the audio itself apart from appears to have been a few small edits. I found this narrator reads a bit faster than the common standard of around 150 words per minute. I often listen to audiobooks at an accelerated rate, so I know it is read fast when I have to turn down my audio speed. I had a few issues initially with the narrator’s accent which forced me to slow the book down for better comprehension. Neither of these may be an issue for you, but I did want to mention them based on the numbers of audiobook I have listened too.

For parents and younger readers, note this book does contain sexual content and some mature themes. Nothing that I would say is excessively used, but it is there. Topics involving prostitution are found in this story as well. Also be aware that there is some rather graphic violence and much of it is without mercy but instead for the sake of one’s revenge. If any of this is offensive to you, I would not recommend you give this book a listen.

In summary, the story had a good flow, yet the audiobook edition was read at a faster pace than I would have liked. The characters are well-rounded, yet I would have desired them to be a bit more complex and dimensional. A few seemed flatter then others. I found the female twist along with her use of graphic violence a different aspect from the traditional fantasy story; which is not a bad thing. If you are in the search for a good stand-alone fantasy story, I think you may find yourself liking this tale.

Disclaimer: I was provided this audiobook free of charge from the author, narrator and/or publisher in exchange for a non-bias review.