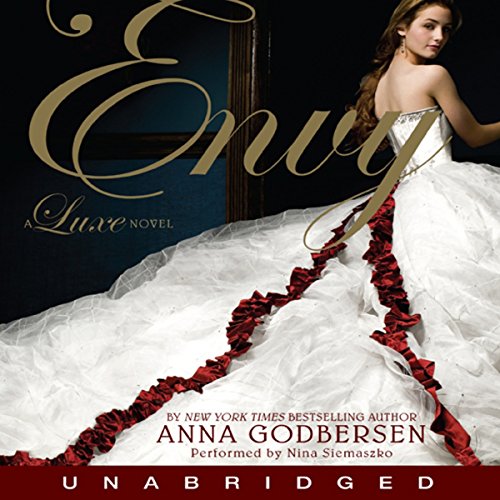 Lace gloves! Jewelry boxes! Horse-drawn carriages! The intricate games of love and attraction played between the mannered upper class and the swarthy servant class below. Is this Jane Austen? No, it’s Envy, the third installment of Anna Godberson’s The Luxe series of young adult novels, set primarily in Manhattan at the turn of the 20th century.

Performed in a sly, crisp tone by actress Nina Siemaszko, Envy continues its saga of the sisters Elizabeth and Diana Holland, two upper class young women who are as wily as they are driven by their passions. Now, scandal attends Diana as her true love catches her with another man, and a well-known socialite’s fortunes are showing cracks. Jane Austen might be amused.

Two months after Elizabeth Holland's dramatic homecoming, Manhattan eagerly awaits her return to the pinnacle of society. When Elizabeth refuses to rejoin her sister Diana's side, however, those watching New York's favorite family begin to suspect that all is not as it seems behind the stately doors of No. 17 Gramercy Park South.

Farther uptown, Henry and Penelope Schoonmaker are the city's most celebrated couple. But despite the glittering diamond ring on Penelope's finger, the newlyweds share little more than scorn for each other. And while the newspapers call Penelope's social-climbing best friend, Carolina Broad, an heiress, her fortune - and her fame - are anything but secure, especially now that one of society's darlings is slipping tales to the eager press.

In this next thrilling installment of Anna Godbersen's bestselling Luxe series, Manhattan's most envied residents appear to have everything they desire: Wealth. Beauty. Happiness. But sometimes the most practiced smiles hide the most scandalous secrets. . .

gosh the story turns and this record is HORRBLE

As for book 4 in the lux series - it is a good tale. However this recording is of the worst quality. It sounds like it was taken from a CD and not well edited.

I’m not going to go on and on about the books; they’re ok, but I will touch on the narrator quickly. I think Nina Siemaszko has a great narrating style, but the mispronounced words were many and extremely cringe-worthy. Her voice was perfect for these books, but some of the mispronunciations made me groan out loud and took a lot of my attention away from the content of the story.

Good but narrator is awful!

The story is fun but the narrator mispronounces many words!!! It’s painful!
Read the book!