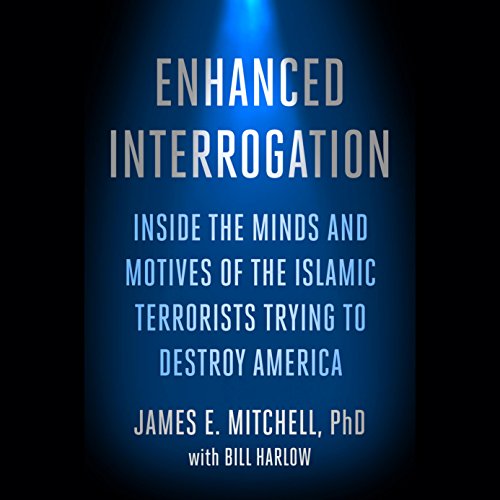 In the dark days immediately after 9/11, the CIA turned to Dr. James Mitchell to help craft an interrogation program designed to elicit intelligence from just-captured top al-Qa'ida leaders and terror suspects. A civilian contractor who had spent years training US military members to resist interrogation should they be captured, Mitchell, aware of the urgent need to prevent impending catastrophic attacks, worked with the CIA to implement "enhanced interrogation techniques" - which included waterboarding.

In Enhanced Interrogation, Mitchell now offers a first-person account of the EIT program, providing a contribution to our historical understanding of one of the most controversial elements of America's ongoing war on terror. Listeners will follow him inside the secretive "black sites" and cells of terrorists and terror suspects where he personally applied enhanced interrogation techniques. Mitchell personally questioned 13 of the most senior high-value detainees in US custody - including Abu Zubaydah; Abd al-Rahim al-Nashiri, the amir or "commander" of the USS Cole bombing; and Khalid Sheikh Mohammed, the mastermind behind the September 11, 2001, terror attacks - obtaining information that he maintains remains essential to winning the war against al-Qa'ida and informing our strategy to defeat ISIS and all of radical Islam.

From the interrogation program's earliest moments to its darkest hours, Mitchell also lifts the curtain on its immediate effects, the controversy surrounding its methods, and its downfall. He shares his view that EIT, when applied correctly, was useful in drawing detainees to cooperate and that when applied incorrectly it was counterproductive. He also chronicles what it is like to undertake a several-years-long critical mission at the request of the government only to be hounded for nearly a decade afterward by congressional investigations and Justice Department prosecutors.

Gripping in its detail and deeply illuminating, Enhanced Interrogation argues that it is necessary for America to take strong measures to defend itself from its enemies and that the country is less safe now without them than it was before 9/11.

Informative, and easy to listen to.

The narrator is very easy to listen to and follow. The story is, in my opinion, a must read (listen). Not only in the "community" but also for the regular folks to understand what threaths are we facing, and some of what is being done by those seeking to protect our American way of life. Kudos to the author for your efforts, and professional demeanor.

Sheds new light from an insider perspective on what actually happened. Reveals motivations and what the press and some politicians don't want you to know.

I most enjoyed the sections of the details of interrogations, the how's and whys, the explanation of the effectiveness of certain procedures. Part of the book, mostly the last third, was a self defense of what he did during a very unique period of American history. I guess he felt like he had to write it but, personally, I didn't need to hear a justification of EIT of murderous monsters. Some secrets are best kept secret.

I'm not really interested in whether or not the author actually invented or simply repackaged EITs for CIA-consumption. What bothers me is that he's got a monkey on his shoulder and is constantly trying to show how much he cared about the prisoners, how much CIA brass either blocked or ignored his protests when things eventually got rough, and how he aimed for the high road all the time whereas problems, errors, and/or character flaws were abundant in all those surrounding him and the interrogation program.

Half interrogation book, half self defense

Discussion on the interrogations and the personalities of the terrorists is engaging and very interesting. Unfortunately, this only last for a portion of the book. A large majority was a self defense of Dr Mitchell and his counterparts. I see no need for Dr Mitchell or the CIA to defend themselves, they were left with a very difficult task.
The book title should include this fact and not mislead readers to thinking it is strictly about interrogation and the terrorists.

Could not put the book down as the intense real time story unfolds. The facts and evolution of the truth are eye opening. Leaves me with a disdain for the political maneuvering and games the politicians have played the heroes and public for. Scary future ahead prophetic.

Eye opening but not as much about Al Qaeda as about our self serving back stabbing hypocrites in our government. It is sad really.

I was on the fence until I read this book. I understood the "American values" aspect that McCain championed with all his heart, but I also understand the reality of dealing with these Islamic Jihadists who seek to inflict maximum damage to America in any way possible.

The truth is that EIT's are the only way we can interrogate these bastards. Without EIT we would be in the dark against an enemy who thrives on our weaknesses. The best case for using EIT is the very fact that we subject our own airman and special forces to the same methods.

Inside look at enhanced interrogation.

This is a must read for anyone interested in how the CIA obtained information from those who sought to destroy our way of life. It presents the other side of the story, the one we didn't see in the news. While Dr. Mitchell spends a good deal of time explaining and defending what was done. It is an important perspective.

A great review of EIT's from one of the few who were actually there rather than agenda driven news outlets and politicians.