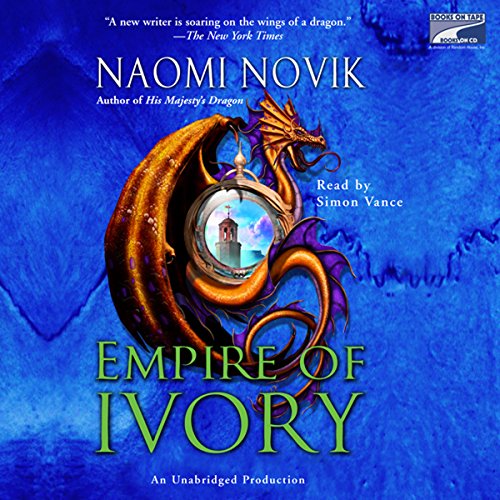 Tragedy has struck His Majesty’s Aerial Corps, whose magnificent fleet of fighting dragons and their human captains valiantly defend England’s shores against the encroaching armies of Napoleon Bonaparte. An epidemic of unknown origin and no known cure is decimating the noble dragons’ ranks - forcing the hopelessly stricken into quarantine. Now only Temeraire and a pack of newly recruited dragons remain uninfected - and stand as the only means of an airborne defense against France’s ever bolder sorties.

Bonaparte’s dragons are already harrowing Britain’s ships at sea. Only one recourse remains: Temeraire and his captain, Will Laurence, must take wing to Africa, whose shores may hold the cure to the mysterious and deadly contagion. On this mission there is no time to waste, and no telling what lies in store beyond the horizon or for those left behind to wait, hope, and hold the line.

Slow start, then gets awesome

I have to say, I figured out what the McGuffin was really early, and then had to wait and wait for Laurence to figure it out, too. That was annoying.

But, once they got going, Africa is her best world yet, and their desperate search for said McGuffin is exciting, their plight afterwards is cool, the British Government thoroughly despicable and Laurence's patriotism and Christianity conflict in a way that is totally in line with his character, creating very real tension and no sense of "manufacture" that most series have by this point.

A Worthy Addition to the Series

This story seemed to drag on at some points, especially during the African expedition that takes up most of the book. The story seems to actually progress the storyline development in the final few chapters.

Overall, it left a slightly bad taste in my mouth, and I'm not sure I like the direction the series is headed at the end of the story. I'm okay with cliffhangers, but when the only part of an eleven hour audiobook that seems worthy of the credit I used for it is the last ninety minutes, which leaves me torn between cheering for the characters and at the same time thinking, "No, you idiots! You're just messing things up for yourselves and everybody else!" at their actions.

I stumbled on the first book, His Majesty’s Dragon, and was somewhat skeptical about the premise of the series. After finishing the first book I quickly devoured the next three books and I can’t wait for the next. These books are well written and a joy to listen too. If you enjoy well written fantasy book, I guarantee you’ll enjoy this series.

I like fantasy and love the age of sail stories so I was delighted to find this series. Book 1 was good but the series gradually goes downhill. If you are expecting action you will be very disappointed. The ending was soooo flat - I was surprised to hear "We hope you enjoyed this production ..." and wondered if Audible missed a few chapters.

The narrator Simon Vance is OK. His portrayal of Termeraire is very cute but I find Laurence too old and stuffy.

The Empire of Ivory picks off right from the cliffhanger at the end of the last book, and, unsurprisingly, ends with a cliffhanger of its own*. Between these sections, you get to visit another part of the subtly altered world of Novik's 19th century: Africa, where colonial ambitions meet the undiscovered powers of the continent. The pace is often leisurely, echoing the Patrick O'Brien meets Jane Austin meets Tolkein style that you have come to expect by now. Additionally, for much of the book, the pacing of the series seems to be slowing further, though that eventually changes. The social interaction between high society and the aviators receives more attention, as does the domestic politics of England, with the deft addition of real political figures of the time. Thus, if you don't mind a relative lack of action for much of the novel, this is a very solid book, with well-developed characters, a sense of history, and some great plot developments later in the audiobook. Though not the delight that the first novel was, this remains a worthwhile and interesting addition to the continuing series.

* So if you haven't read the series in order, you really should start with the first novel, His Majesty's Dragon. It is quite good, and about dragons to boot.

Some reviewers have said that this book starts slowly but I didn’t find that to be true at all. I love the details of life during the napoleonic era which will ring true for any Jane Austen lover. Lawrence’s sense of duty and honor may seem quaint and antique to our modern sensibilities but they are exactly what one expects of a hero in this bygone age. And of course Temeraire is always a completely engaging and refreshingly honest character. I love the way he and Lawrence are devoted to each other. This was the best book in the series since the first one and I am eager to go on to book 5. Highly recommended!

"It's a kind of consumption," Lord Lenton said tiredly, turning to the window.

“Everywhere,” Lenton said. “Dover, Portsmouth, Middlesbrough. The breeding grounds in Wales and Halifax; Gibraltar; everywhere the couriers went on their rounds; everywhere.” He turned away from the windows and took his chair again. “We were inexpressibly stupid; we thought it was only a cold, you see.”

Narrated superbly by Simon Vance. I've listened to the series. This book is among the best. It rocks, even despite the cliffhanger conclusion.

The story begins in England, 1807, then to Africa via the Gold Coast (slaving forts or "castles") to the Cape, then back home.

Perfectly paced, with action scenes nicely spaced by restful times (not quite enough happy bonding times). Some surprising twists in both plot and characterization. (Pastor Erasmus and his wife, Hannah, especially.) I felt the characters more deeply -- their inner turmoil as they made tough decisions, mourned losses, faced death, etc. I found the plot quite absorbing, partly because Novik offers such a wonderful picture of how slavery might have been abolished, in Africa.

Dragons are dying of some sort of deadly flu, so Temeraires and others journey to Africa for the cure -- stinky mushrooms. Big ones. They wind up in Capetown. From there, into the interior, to Tswana territory, Botswana, home of Moshueshue, prince of the Tswana tribe and leader of the Tswana-Sotho alliance of sub-Saharan African tribes. (Somehow, I think he is Shaka Zulu. Or related to him.)

Across the chapters, some characters die, some new characters sign up, alliances formed and broken, a special "egg" conceived. Towards the end of the book, Laurence and Tem are forced to make a tough decision.

Back home in England, Wilberforce and Allendale strive to prohibit slavery, despite Lord Nelson.

On the continent, Napoleon continues to attack, planning to invade England.

Oh, and in Dover, Arkady and the new band of feral dragons settle in. Somewhat.

Temeraires still wants a nice pavilion, just as he saw in Peking.

Cliff: What will become of Laurence and Temeraire? What will come of the two African boys, Demane and his little brother Sipho?

I read that a movie may be in the making. Peter Jackson?

I'm in Love with Temeraire!

What made the experience of listening to Empire of Ivory the most enjoyable?

I love the characters and the plot, which case has one heck of a cliffhanger! Great imagination. The reader is very good and not at all distracting.

Inagination, characters and plot as above. Also, the language is wonderful!

What does Simon Vance bring to the story that you wouldn’t experience if you just read the book?

I can listen to it in the car, which is huge. Simon Vance brings the characters to life.

Oh no! I love savoring it over several days, enjoying all of the little things, the turns of phrase, the action, and the wonderful opportunities for sightseeing.

A turning point in the series

While I didn't get quite as much enjoyment (only less by a micron really) from this book compared to all the others, I did enjoy it and saw it as a pivotal turning point in the series. I did feel a bit disconnected when they were in most of Africa, but the interesting story line, the return of our dragon friends (after being away from them for several books) and their cause were well worth it. Great narrator as always.

Fantasy at it's best

This is a great series. Fun to listen to. The narrator does a wonderful job.