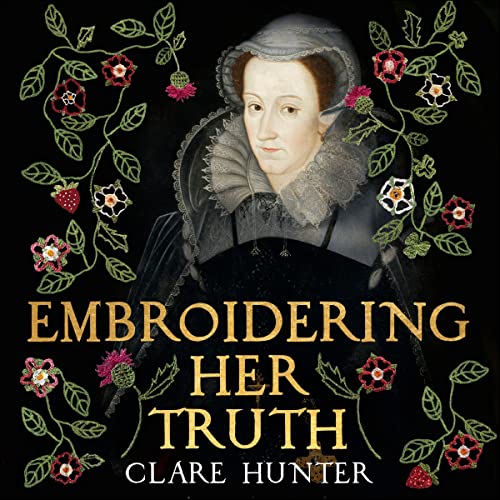 An alternative biography of Mary, Queen of Scots through the textiles of her life from the author of Sunday Times best seller Threads of Life.

I felt that Mary was there, pulling at my sleeve, willing me to appreciate the artistry, wanting me to understand the dazzle of the material world that shaped her.

At her execution Mary, Queen of Scots wore red. Widely known as the colour of strength and passion, it was in fact worn by Mary as the Catholic symbol of martyrdom.

In 16th-century Europe, women's voices were suppressed and silenced. Even for a queen like Mary, her prime duty was to bear sons. In an age when textiles expressed power, Mary exploited them to emphasise her female agency. From her lavishly embroidered gowns as the prospective wife of the French Dauphin to the fashion dolls she used to encourage a Marian style at the Scottish court and the subversive messages she embroidered in captivity for her supporters, Mary used textiles to advance her political agenda, affirm her royal lineage and tell her own story.

In this eloquent cultural biography, Clare Hunter exquisitely blends history, politics and memoir to tell the story of a queen in her own voice.

It's a fashion history book much more then Mary's.

As for a storyline, it's all around justifying often incompetent and in most cases openly stupid desisions of Mary Stuart. Some parts where author criticizes Elizabeth and tries to show Mary as a martyr made me cringe. In the last chapters where the story went around Mary's capitivity and her plotting against Elizabeth despite author's tries it was clear that Mary wasn't innocent at all and such were the laws at that time: she committed treason and she paid for it. I stopped listening to the book where author says that Elizabeth's rights to the throne were dubious when Mary was a rightful monarch. Seriously?

The book is too biased to be called a proper history book, but as a costume historian and specialist I do give credits for a very interesting insight to fashion, costume construction, embroidery and hidden meanings in each detail people wore back in those days. 2/5

Overall I recommend this book to people who are interested in fashion history, not in history of Mary Queen of Scots.